CREATe is happy to present the sixth entry in our 2022 series of working papers: “Can you play? An analysis of video game user-generated content policies” by Amy Thomas, Lecturer in Intellectual Property and Information Law, CREATe, University of Glasgow. 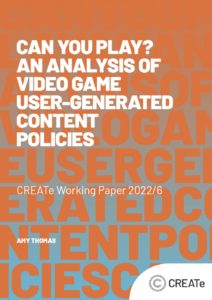 This working paper synthesises the initial findings of You Can Play, a project supported by an ESRC Impact Acceleration Award and developed in partnership with Blazing Griffin. The working paper reverses the enabling affirmation of You Can Play for a more academic enquiry: when is a user permitted to creatively play with game content, and under what conditions? To answer this question, the working paper examines the user-generated content (UGC) policies of video game creators to unearth trends in regulating user creativity in this industry.

The findings suggest that there is a difference in allowances for UGC where user input is viewed as an experiential process, versus the value of game assets which form the franchise or brand. Game creators are largely supportive of the (relatively) new cultural activity of ‘watching someone play a game’, with generous allowances for streaming and monetisation of video content. This allowance feeds into the existence of an influential user industry who offer entertainment and value in the process of playing; it seems that the market for games as an experiential product is not substituted by a market for viewing them. By contrast, game assets which have a static value that can be divorced from the game world are often treated more restrictively, such as the use of a character on a convention t-shirt, or a game soundtrack in content unrelated to the game itself. This finding is unexpected, as the project was conceived as primarily copyright-orientated; by contrast, branding (and perhaps relatedly trade mark) play an important role in the regulation of user creativity.

This working paper will be presented at the SCOTLIN Early Career Scholars symposium in Edinburgh (1-2 June). It is offered here as an authentic ‘in-progress’ work for commentary and feedback, which is welcomed by the author.

We are also happy to announce that You Can Play will continue to grow, with a further award of ESRC IAA follow-on funding granted for the project! Subscribe to the CREATe newsletter for future updates.

The working paper examines the UGC policies of 30 popular game titles, identifying seven different types of UGC activities and the varying degrees to which they are permitted: either entirely without condition; with conditions; or wholly prohibited. In doing so, the paper identifies industry trends in regulating user creativity, and how this responsive contractual tool acts as a gateway for reflection for copyright reform.