New Digital Resource: You Can Play

New Digital Resource: You Can Play

By Amy Thomas28 January 2022No Comments

In this blog, Amy Thomas announces the launch of a new digital resource: You Can Play, a catalogue of user-generated content (UGC) policies for video games. The resource (supported by an ESRC impact acceleration award) offers easy-to-understand interpretations of the (often complex) rules concerning the use of copyrighted game content.

What was the inspiration for the project?

Video game UGC is an exciting new form of cultural production. Its creators act as a mediator between game companies and consumers, whilst new business models are being built around its creation and exploitation. As a now ubiquitous part of life online, some game UGC communities have even become an unexpected front runner of the entertainment industries, with the now commonplace, if little understood, phenomenon of ‘watching other people play games’. Millions flock to streaming sites, like Twitch and YouTube Gaming, to watch personalities such as Ninja, Markiplier and JackSepticEye, who earn millions in return. Whilst this is almost certainly the most popular form of UGC, other forms of creativity remain prevalent, such as modding and fan communities. More recently, game photography has showcased increasingly complex and beautiful in-game worlds through the lens of the user.

Despite the proliferation of game UGC, its creation and dissemination take place in a legally grey area. The default copyright law of many jurisdictions is often not amenable to the creation of, e.g., game videos and streams, which may use a substantial amount of copyrighted content (and usually without the characteristics which would grant the benefit of a copyright exception). Even taking a screenshot of a singular video game frame could be considered an infringing activity.

Faced with this legal uncertainty and risk, many game creators choose to cut through the gordian knot of law and create a parallel system of UGC permissions through user licensing. In fact, game creators are often more permissive with how users can interact creatively with games than copyright itself. However, the way in which these permissions are communicated is complex. Not only do permissions vary between different game creators, but they are often embedded within lengthy agreements, dense legalese, and stratified over a myriad of different licenses, terms and conditions, codes of conduct, and UGC policies.

As such, this project was inspired by the need to map and understand the scope of this user licensing system: what UGC activities are permitted by which game creators and under what conditions?

What is the project?

You Can Play codes games based on seven different types of UGC activities:

These activities are coded in a ‘traffic light system’ of whether the activity is permitted without condition (green), permitted with condition (orange) or prohibited (red) by a particular game creator. The main feature of You Can Play is a dynamic radar graph that shows these different permissions in relation to each activity. 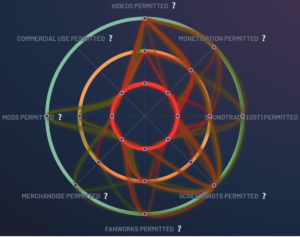 You Can Play also has a filtering mechanism so that you can choose to focus on, e.g., only games that allow monetisation of videos, and a search mechanism to look for specific games or companies.

We also created a scoring system to rank ‘levels’ of permissiveness between different game creators in order to get a quick impression of their attitude towards UGC. Every affirmative permission was given a score of 12.5; 6.25 for permissions accompanied by certain conditions; and 0 if the activity was not permitted. Put simply, a score of 100 means that every activity is fully permitted by a game creator, whilst 0 means nothing is permitted – essentially an all-rights-reserved, no-UGC-permitted model.

Who is the project for?

You Can Play is intended to be an accessible visualisation and resource for creators of game UGC. People who stream games and monetise them are likely to be the primary users, but due to the holistic approach of the project many other UGC creators can benefit from the resource.

You Can Play can (and should) also be used as a reference point for game creators, developers and publishers when forming their own UGC policies. Smaller companies and indie creators may not have the resource to consider every possibility of UGC, and the conditions that can be attached to them to allow for the reuse of their work. In this way, we hope that You Can Play will encourage game creators to consider what terms they are comfortable to implement and under what conditions, with reference to certain industry standards.

What does the future hold?

It’s likely that many of the existing UGC policies will change often, and rather quickly, in response to changes in the industry, and broader society. On a positive note, it seems that such changes, like increased home gaming during the COVID 19 pandemic, seem to be encouraging permissiveness, rather than a more restrictive approach. From the initial point of gathering the dataset in 2019 to the updates at the beginning of 2022, many game companies have become much more permissive in the span of only a few years: in 2020, Capcom, creators of game series’ such as Resident Evil, changed from an all-rights-reserved model to allow for the creation of videos, and even some monetisation; Nintendo have also seemingly entered a more permissive trajectory. These are large and influential publishers who may encourage a more liberal attitude towards UGC in the industry.

We might also expect with news of the Microsoft-Activision Blizzard deal that many existing coded game titles will be subsumed within the acquirers’ UGC policy, such as was the case with Psyonix, creators of Rocket League, and Epic Games. Of interest, this may not be a bad result for creators of UGC (though importantly, reserving judgement on whether this is a bad result overall), as Microsoft are the more permissive company where this is concerned (scoring 56.25 on the YCP scale, whereas Blizzard scores 43.75 and Activision 0). But this is not always a guarantee: Mojang, creators of Minecraft, seem to have successfully negotiated a separate UGC policy even many years after their acquisition by Microsoft (and now scores 62.5 on the YCP scale – so this appears to have been in an effort to offer even more permissions than their acquirer).

You Can Play is a dynamic tool that will continue to grow in future. Game creators, people who create cool new things with games (and people who play them!), are encouraged to get in touch with new suggestions for You Can Play through the contact form.

You Can Play was created with funding from ESRC IAA project 315056-01. With many thanks to Dietmar Aumann of Veste Software for developing the tool, and Diane McGrattan for all of her support with the project.