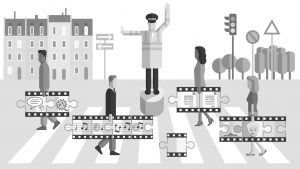 What is the evidence for such radical measures? CREATe is relaunching our copyright reform resource page today. We present a consolidated view of independent academic contributions to the most contested articles of the proposed Directive. We also offer a timeline of the policy making process and access to draft documents where they have become available (sometimes as leaks).

Following the adoption of a position of the Council of the European Union on 25 May 2018, the European Parliament’s Legal Affairs Committee (JURI) will vote on the proposed Copyright Directive on 20 June.

It is extremely rare for a later plenary vote to overturn the lead committee’s position. So the destiny of the controversial directive may be settled shortly. This is an important junction in copyright policy, as the Copyright Directive could be the most far reaching European copyright intervention since the 2001 Information Society Directive.

We hear: Fake news will take over unless we create new exclusive rights for press publishers. Or alternatively: The democratic function of the internet is in peril if we require permissions to be obtained for disseminating news.

We hear:  More creative content is being consumed than ever before, but the value is appropriated by online platforms not creators. Forcing platforms to obtain licences will lead to increased remuneration for creators. Or alternatively:  Imposing filtering obligations on platforms will limit user engagement, and reduce opportunities for start-ups and emerging creators.

Form your own judgement.