“This Video is Unavailable”: New paper by Erickson and Kretschmer

“This Video is Unavailable”: New paper by Erickson and Kretschmer

By Kerry Patterson24 May 2018No Comments 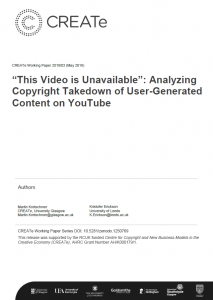 The Journal of Intellectual Property, Information Technology and Electronic Commerce Law is publishing Kris Erickson and Martin Kretschmer’s article “This Video is Unavailable”: Analyzing Copyright Takedown of User-Generated Content on YouTube, in its issue available today. The study offers an important empirical perspective on the actual behaviour of rightholders in removing potentially infringing content. This matters as the European Union is seeking to create new obligations on platform intermediaries that may amount to default filtering of content uploaded by users.

As Erickson and Kretschmer say:

“We suggest that evolving policy on intermediary liability – for example with respect to imposing filtering systems (automatically ensuring “stay-down” of potentially infringing content) – should be carefully evaluated against evidence of actual behavior, which this study shows may differ materially from stated policy positions.”

The current Bulgarian presidency of the EU is seeking this Friday (25 May) to establish the Council position on the Proposed Copyright in the Digital Single Market Directive (COM(2016) 593), in order to enter negotiations with the European Parliament. See Miroslav Hrtska’s Twitter feed for up-to-date information: https://twitter.com/mir_hrstka

The proposed Council position is available here. The latest “compromise” amendments proposed by European Parliament Rapporteur Voss to establish the Parliament’s position are here (scheduled to be voted at the end of June).

For a full timeline and context, see: https://www.create.ac.uk/policy-responses/eu-copyright-reform/

Erickson and Kretschmer’s article can be accessed here: “This Video is Unavailable”: Analyzing Copyright Takedown of User-Generated Content on YouTube

What factors lead a copyright owner to request removal of potentially infringing user-generated content? So-called “notice-and-takedown” measures are provided in the United States under Section 512 of the U.S. Copyright Act (as amended by the Digital Millennium Copyright Act 1998) and enabled in the European Union under the Directive on Electronic Commerce (2000/31/EC). While the combination of limiting liability (“safe harbor”) and notice-and-takedown procedures was originally conceived as a means of balancing innovation with the interests of rightholders, there has been limited empirical study regarding their effects.

This research investigates, for the first time, the factors that motivate takedown of user-generated content by copyright owners. We study takedowns within an original dataset of 1,839 YouTube music video parodies observed between January 2012 and December 2016. We find an overall rate of takedowns within the sample of 32.9% across the 4-year period. We use a Cox proportional hazards model to investigate propositions from rightholder groups about the factors that motivate takedowns: these include concerns about commercial substitution; artistic/moral concerns; cultural differences between firms; and YouTube uploader practices.

The main finding is that policy concerns frequently raised by rightholders are not associated with statistically significant patterns of action. For example, the potential for reputational harm from parodic use does not appear to predict takedown behavior. Nor does commercial popularity of the original music track trigger a systematic response from rightholders. Instead, music genre and production values emerge as significant factors. We suggest that evolving policy on intermediary liability – for example with respect to imposing filtering systems (automatically ensuring “stay-down” of potentially infringing content) – should be carefully evaluated against evidence of actual behavior, which this study shows may differ materially from stated policy positions.