By Admin5 February 2018No Comments

Angela McRobbie presents the second phase of research into fashion micro-enterprises, for the Research Blog Series. 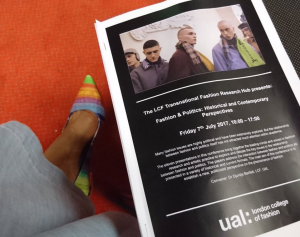 The second phase of work for CREATe has entailed a new round of interviews, events and activities focusing on the impact of digital online transformations across the sector, especially in retail. Our intentions this time were to work with a smaller number of designers and companies in each city and seek to gain a clear sense of how the significant changes away from physical location selling (ie shops) to online retail were impacting on the sector, particularly the micro-businesses and those working in a start-up framework.

Facing some obstacles, as ever, with questions of access to the big players we had hoped to involve in the Phase 2 work, we have nevertheless worked hard to pursue contacts with former employees, while also building a significant bank of secondary data with companies such as Asos and Farfetch in the UK, Yoox in Milan, and Zalando in Berlin. In the cases of Asos and Zalando we are still actively seeking personal connections with the companies which are global leaders in the field. Meanwhile we have been fortunate in gaining access to leading online fashion companies such as Not Just A Label which until a few months ago was based in London and has recently moved to LA. Likewise we have been working closely with Marte Hentschel in Berlin who has made the move in the course of the research from heading up a producer services company (not-for-profit) to taking the lead in the digital platform Sourcebook.com specifically for fashion designers, which she has founded and is now extending in a variety of ways.

Once again one of our insights during the three years of research is that added research value lies in creating an active and engaged team-spirit especially from the networking events. The knowledge transfer here benefits participants in unexpected and unpredictable ways. It seems that the CREATe project has helped some of our participants to crystallise interesting career decisions and manage to organise new directions in the field.

However this blog really begins with our Phase 2 Milan event which took place on March 1st 2017. Here our intentions were to introduce our new and ongoing research on digital e-commerce in order to prompt discussion with the research community in Milan including some of the leading figures in the area such as Prof. Laura Bovone (Universita Cattolica del Sacro Cuore, and Dr Marianna D’Ovidio (Universita di Bari). In addition we invited some young academics and post-doctoral researchers such as Dr Guilia Mentisieri, Ecole des Haute Etudes en Sciences Sociale, Paris) to join the conversations lasting into the evening and beyond.

The main activities following the Milan event have involved consolidating the outcomes and planning dissemination as we head towards the conclusion period of the CREATe project. In addition we have each spend time preparing academic papers for presentation at conferences. Having realised after the Milan event that there are colleagues in France and Italy as well as in Germany investigating similar themes of precarious work in and around the edges of the urban fashion design industry and also undertaking research on digital labour in the sector we have proposed a Special Issue of the Journal of Urban Cultural Studies to include some of the already existing CREATe team and also two of the wider network. The proposed issue will therefore include an Introduction written by Prof Angela McRobbie followed by articles by Dr Bastian Lange and Prof Ares Kalandides (both CREATe collaborators), Dr Marianna D’Ovidio writing from an urban sociological perspective about Milan, Dr Guilia Mentisieri writing about precarious fashion workers in Paris, and finally Dan Strutt looking at digital labour in ‘fashion tech’ in London. This is a peer-review journal but with time for planning and previewing the articles we very much hope to see all four pieces into print for late 2018.

Alongside this the core CREATe team have been meeting regularly to discuss the contents and structure of the monograph /book which will be written in the next nine months. From the start of 2017 other invitations have also come our way, including one to take part in a seminar on Design and Inequality hosted at the LSE International Inequalities Institute (British Sociological Association Event, Design and the Social February 7th 2017). Since then Angela McRobbie has been invited to submit an overview article from the CREATe work for a projected Special Issue of Sociological Review (currently under consideration).

We have also been working on the data we have gathered finding the best way of archiving it and putting it into a format which will allow easy access for when we embark on writing the monograph. Inevitably we have tried to update and refresh some of the interviews and we have established a ‘catch-up’ by regular email and also face-to-face meetings with almost all of our respondents. This has been labour intensive and time consuming, but it also has an ethical dimension insofar as one of our aims has been to develop a sense of reciprocity with our respondents. The regular meetings and face-to-face conversations are just two of the ways in which there is constant sense of knowledge exchange. For the very final stages of the project such meetings assume greater importance as this allows us to more fully understand the changing socio-economic landscape in which these creative workers are operating.

This is an edited version of the phase II report. Find out more about the project here.