By Admin27 November 2017No Comments

For our Research Blog Series, Luciana D’Adderio reviews her work on business models in the 3D printing industries. 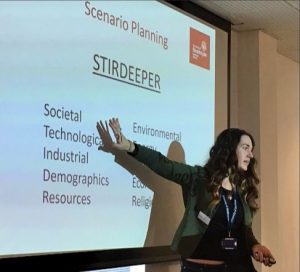 What did your research aim to do?
This project sought to examine, document and analyse the emergence of business models in the 3d printing industries, drawing on a novel inductive and observational methodology for business model taxonomy developed by the PI.

How did you do it?
We conducted an in-depth investigation of the situated, distributed and materially-mediated practices which make up the cornerstones of the Business Model (BM) framework. These include the actual processes by which value proposition is created, delivered, captured and communicated. This novel approach is in contrast with the majority of the extant literature which has adopted an objectified view of BMs, whereby they are mostly treated as  ‘objects’ or tools which managers and entrepreneurs can acquire and manipulate in their quest for harnessing value. We developed, applied and tested our innovative methodology with a number of organisations engaged in the 3D Printing ecosystem, ranging from start-ups to some of the leading innovating organisations, and across sectors from Design and Manufacturing to Healthcare.

What are your key findings?
Our research suggests that there are some clear advantages in observing closely the range of actions and the actors involved in the construction and emergence of BMs and treating value not as a given property but as constituted through the creation and implementation of the business model. Actions include the individual and organisational activities through which value is negotiated across the boundary with customers, users and producers – boundaries which in 3D printing/additive manufacturing are increasingly blurred. Actors include not only managers and entrepreneurs but also a wide range of intermediaries which influence and shape the very substance and meaning of value in different contexts. Our project’s preliminary findings suggest that a much deeper exploration of the processes of value creation and exploitation is required in order to capture how BMs emerge and impact the evolution of the 3D printing/additive manufacturing landscape.

What impact has your work had so far/what impact do you anticipate it will have?
The research has produced publications which are spearheading a radical new approach to the study of Business Models and Business Model Innovation. It has supported the creation and consolidation of a 3DP/AM ecosystem in Scotland (and beyond). The methodology has been used to directly inform Business Model Innovation and 3DP/AM strategy at a world leading organisation. We expect the approach to directly influence the emergent Scottish National Manufacturing strategy within the next few years.

Challenges encountered/Lessons learned
The challenge was how to capture a phenomenon which is highly emergent and distributed. We invoked a number of approaches including ethnography (participant observation), questionnaires, and scenario planning.

Are there additional/new research questions still to be answered in this area?
Findings suggest the emergent 3DP/AM sector is rapidly expanding and will likely transform the industries where the innovations are being adopted. Transformation will include radical business model innovation, as 3DP/AM become integrated with complementary technologies such as AI. An important question is how creative industries could learn from other sectors (such as manufacturing and healthcare) which are spearheading technological and organisational advances in 3DP/AM.

How has your association with CREATe helped to take things forward?
CREATe has been instrumental in providing the resources which enabled to put together, support and train an interdisciplinary research team, including two RAs, three PhDs, one MSc and one affiliated lecturer. It provided invaluable exposure to public and private sector organisations and access to key policy making bodies.