By Admin17 November 2017No Comments 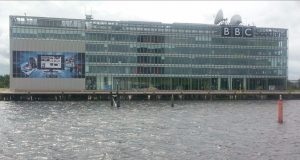 BBC Scotland HQ during the 2014 Commonwealth Games in Glasgow

What did your research aim to do?
The work package explored social media and online interactions around live media events, broadcast by Public Service Media providers in the UK. It focused on the BBC’s ‘BBC Live’ system, and its central role in promoting BBC’s programmes and content across platforms and social networks, as well as generating and orchestrating connected viewing experiences around live events across devices (mobile/tablet/PC and TV). ‘BBC Live’ is a Content Management System as well as the BBC’s online, live graphic user interface. It was originally developed to cover the sporting events at the London Olympics in 2012, and has since been used to cover music events (Glastonbury and the Proms), politics (the Scottish Independence and EU Referenda), arts (The Edinburgh Festival) and sports (Wimbledon, the World Cup and the Commonwealth Games).

How did you do it?
With the BBC’s and Channel 4’s live coverage of the Sochi 2014 Winter Olympics and Paralympics as case studies, the research project drew on interviews with BBC’s Head of Sports and social media producers at Channel 4 as well as data on viewer interactions, social media activity and live events from PACT, Ofcom and the BBC.

What are your key findings?
The research project highlighted the ways in which the BBC and Channel 4 are developing and utilising ‘Social TV’ –  real time interaction during live broadcasts –  to the extend the coverage and enhance the viewing experience of live media events, enrich the potential for interaction and create an experience of taking part in a social event from your living room. These Public Service Media (PSM) companies do so in order to  compete with the rising number of new live streaming platforms, sites and VOD services as well as to gather data on viewers/users.

What impact has your work had so far/what impact do you anticipate it will have?
I have presented the findings from this research project at academic conferences and published two articles. These have shaped and informed research into ‘Social TV’, live media events and live streaming.

Are there additional/new research questions still to be answered in this area?
The broadcast of live media events is core to PSM and this work package has continued and fed into scholarship exploring PSM in its many forms and formats. Research into live media events and ‘social TV’ also form part of emerging body of research into new the business models,  forms and delivery methods of live streaming on online and social media platforms, for example on  interactive gaming sites and  platforms like Twitch and Douyu, or live streaming on Facebook Live.

How has your association with CREATe helped to take things forward?
The work package from CREATe was absolutely instrumental for the conceptualisation and execution of the research project. It provided resources to travel to London and Salford Media City to conduct interviews and allowed access a network of researchers with whom I could discuss my findings.

To find out more, see the two articles: ‘The revival of live TV: liveness in a multiplatform context‘ and  ‘Content in context: The impact of mobile media on the British TV industry‘