By Kris29 September 2014No Comments 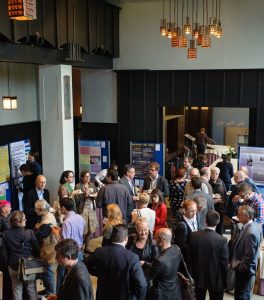 A lively crowd gathered at the House for an Art Lover in Glasgow for the CREATe All Hands meeting.

The closing session at the CREATe All Hands event underlined two distinct areas where CREATe activities can have a major impact. First, talks by Dominic Young (Copyright Hub), Kieron O’Hara (University of Southampton) and Joe Karaganis (American Assembly, Columbia University) identified areas where cutting-edge empirical research can address pressing economic and social questions. Second, presentations by Jeanette Hofmann (Social Science Research Center, Berlin) and Philip Schlesinger (CCPR, University of Glasgow) highlighted the way in which CREATe can break new ground in terms of our relationship with society, industry and academia. Addressing both of these objectives is a heavy responsibility to bear, but at the same time these challenges represent exciting opportunities for CREATe. Are we up to the task of not only innovating new research programmes to question received wisdom and policy, but also forging new identities in the difficult space between scientific objectivity and political engagement?

Dominic Young drew on his long experience in the news business to persuasively argue that transaction costs associated with copyright licensing are a significant problem for media industries. This is an issue that others, including Professor Ian Hargreaves, have noted. Essentially, finding the right person to ask for permission when using a copyright work can be time consuming and difficult. Even if the rightsholder can be located, they might not wish to license the use of the work, either because they do not approve of the use or because the revenue represented by a single transaction is insignificant. The Copyright Hub, Young explains, is an experiment to see if solutions can be found in specific contexts. Finding a solution to this problem is a high priority for policy makers and industry. Indeed, YouTube and other online platforms have already spent hundreds of millions of dollars on technologies to facilitate the detection and licensing of copyright works via proprietary systems such as ContentID. Further research is needed in this area. How should automated licensing schemes deal with copyright exceptions? How can territorial complexity be overcome? What are the likely economic impacts of individual licensing options? Who will benefit from investment in this area and by how much?

Philosopher and computer scientist Kieron O’Hara raised larger questions about the role of automation and profiling of users more generally. To illustrate his point that social media and big data constitute contemporary myths, he used the example of a recently published paper by researchers from Cornell University on an experiment with live human subjects via Facebook. While controversial for its manipulation of people’s moods via language, O’Hara suggested that the more important message was that public criticism of Facebook’s complicity in the research merely served the mythos of Facebook as a site of ‘preternatural control’ in our private lives. The idea that populations could be manipulated via Facebook updates may have been one reason why the stock price of the company rose 8% following publication of the results. One prescient observation made by O’Hara is that as individuals our activities are legible to big data controllers, but due to the complexity of these algorithmic systems, they remain illegible to us. Facebook users didn’t know they were being experimented upon and even if they had, they lacked the collective ability to resist. Current work by CREATe researchers at Nottingham University on open user platforms seeks to address these wider issues, but much more work can be done on the regulation of user privacy and in particular, on ways that users can be given more control and visibility over the use of data.

Joe Karaganis is Vice President of the American Assembly, author and copyright researcher. He spoke about his recent empirical work on media piracy in emerging economies, in order to illustrate how research might be used to craft more effective policy in one arena sorely lacking in evidence. Karaganis argued for more meso-level research – investigation that invites collaborations between the top (intergovernmental level policy) and bottom (ground level consumption). While CREATe is involved in a great deal of research on copyright policy in the UK, his call for more international collaboration was particularly welcome. Karaganis also addressed the role of academics in the political process more generally. What are the outputs, beyond journal articles, that we should aim to produce? The system of promotion and tenure at most major universities means that many of us are incentivised to write journal articles, but paradoxically these represent the most marginal way to communicate to the public. 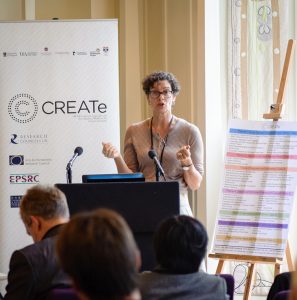 Jeanette Hofmann spoke about her work at the Social Science Research Center Berlin (WZB) and the task of navigating the space between scientific objectivity and social engagement. She described her research agenda as ‘problem-oriented basic research’, a descriptor that likely resonated with many in the CREATe audience. This type of work is fraught with challenges, she argued, because when researchers go out into the field, they risk becoming personally invested in the their findings and choosing political sides. On the other hand, researchers who stay isolated from the field may produce detached research that doesn’t have much impact at all. How does one strike a balance between these two competing forces? She described her own approach as a constant work of translating and detaching oneself. Always returning to theory, she suggested, was one powerful way of articulating observations from the field in terms of actionable research findings. “I see that the literature says one thing,” Hofmann recounted, “but I see you do something completely different in practice. How would you explain that?”

Finally, University of Glasgow Professor and CREATe Deputy Director Philip Schlesinger delivered an impassioned provocation on the nature and status of the ‘public intellectual’. While less frequently evoked in Britain, the public intellectual has long been a powerful if controversial figure in the United States. As Schlesinger concisely summarised, the main line of critique by academics has been the extent to which “a capacity to generalize about matters of public import is waved in the faces of those who dare to specialise.” But, to the extent that intellectuals can influence public policy via legislation, the role of the public intellectual is a potentially powerful one. As his own research has shown, the very concept of the Creative Industries as an organising concept was shaped by an intersection of political and intellectual interests in the 1990s. Schlesinger expressed the view that although CREATe has a strong ethos of independence and transparency, we should reexamine the extent to which our work is political. “Let us consider,” he proposed to the audience, “whether or not adding an explicit commitment to public intellectuality might be congruent with existing expertise and increase the breadth of the audience without sacrificing rigour.”