By Andrew McHugh1 October 2014No Comments 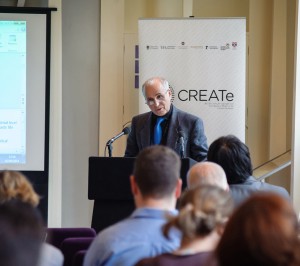 This post was originally presented as the closing paper in the final session ‘Where have we been and what next?’, of CREATe’s first All Hands Conference at House for an Art Lover, Glasgow on 16th September 2014

This evening, I’ve been asked to broach the topic of the ‘public intellectual’. While it’s the subject of much definitional wrangling, this term nevertheless signals something about how, by virtue of actions directed towards a general public, the battle for ideas and influence achieves a wide resonance.

There are at least two dimensions to this. One is the achievement of reach – expanding the range of those who can be addressed by our work.

And a second is the capacity to produce broad new thinking – to make connections between disparate themes and theories, to synthesise empirical findings, and then to fashion these into something new and compelling. To produce new narratives about the fields in which we are working.

If we were public intellectuals at least some of the time, our expertise would be the jumping-­off point but also in some respects transcended.

I don’t want to distract us unduly by dwelling on the meanings of ‘intellectual’. But we do need a few signposts in order to indicate its continuing value.

Noting a prevalent cultural unease in the UK, Stefan Collini in his excellent volume Absent Minds, wryly suggests that any book on intellectuals in Britain will be very short, if even possible. Nevertheless, he still managed to pen over 500 pages on the topic.

In the USA, theories of the intellectuals and indeed the term public intellectual have been much discussed and regularly so. A lot of that debate concerns whether or not the scope of intellectual life – wide-­ranging thinking and engagement with public matters – has become unduly professionalised and narrowed by academics who write for themselves and their own advancement.

Collini picks up this point towards the end of his account, noting that the term ‘public intellectual’ only arrived in the UK in the late twentieth century, functioning as a point of contrast to ‘the academic’.

A key axis of discussion then, is that a capacity to generalise about matters of public import is waved in the face of those who specialise. Of course, there are indeed individuals – some academics – who can do both these things exceptionally well. But there aren’t that many. Of late, Prospect magazine has made a specialism of amusing and annoying its readers by seeking a public intellectual of the year – that is, one who makes a signal contribution to the public conversation – a space that has been increasingly transformed by the Internet.

But the big shift really came after World War II, once we started talking about post­‐industrialism and a knowledge or information society. That’s when sociological thought focused increasingly on how class structure was changing and how this had led to the emergence of a new class of the knowledgeable, and the kind of power and influence that it was said to exercise through the skilled manipulation of symbols and discourse.

Whereas at one time the gurus of this kind of thinking were Daniel Bell and Alvin Gouldner, at the turn of the millennium, that line of thought was given a new spin by Richard Florida, who vastly expanded the volume of the creative class.

But every such utopia may be countered by a dystopia. Well before Florida gave us all a new identity to feel good about, the post-modernist sociologist Zygmunt Bauman had concluded that the day of the intellectuals was effectively over. They had become curators of interpretation rather than exercising legislative power, responding to agendas rather than shaping them.

As it happens, I disagree with this, and not because I agree with Richard Florida. My own research, both past and current, into how creative industries policy was fashioned in the New Labour years and after has brought to light the role of think tanks, advisers and privileged circles of those in the know in framing the agenda. If ever there was a will to legislate, to make us think differently about the relations between the cultural and the economic, it was manifestly there and then.

The invention of creative industries as an object of policy – and subsequently an object of research – was an exercise in expert power and influence, a legislative move rather than a merely interpretative one.

While we can trace the antecedents in the Frankfurt School, cultural economics, cultural cities policies, theories of human capital, and the political economy of communication, some expedient and fast-footed politicking back in the late 1990s led to the framework in which we all now work – that of the creative economy. This thinking has been globalized through major international agencies such as the UN and reinforced as a discourse by us expatiating upon it, whether as proponents or critics.

This is where our research agenda comes from, at least in part. This is where the commitment of RCUK to investigating the creative economy and the digital economy originates.

Like other research centres, CREATe is a collectivity of expertise, par excellence. Transciplinary, trans-university, articulating into the domains of policy and practice, its discourse is expert and authoritative. From the start, CREATe has very explicitly sought to avoid capture by any interest. In terms of the classic division over how public intellectuals should conduct themselves, it has espoused detachment rather than commitment.

That is undoubtedly the way to conduct its core business and rightly so. But let us consider whether or not adding an explicit commitment to public intellectuality might be congruent with existing expertise and increase the breath of the audience without sacrificing rigour.

Why not? There’s certainly a precedent. Last year the AHRC funded a research-training programme called ‘Becoming a public intellectual’. It was precisely aimed at ‘researchers seeking influence beyond the university sector, speaking to the concerns of a broader public and setting the agenda for developments in the cultural and creative sectors’.

But in taking this road, we do need to be aware of a further ambivalence in the discourse. All British academics know that our working lives have been increasingly shaped by the audit culture. Our research now has to meet impact criteria that were invented for accountability rather than public intellectuality. Knowledge exchange has similarly been instrumentalised as a necessary good, without enough consideration being given to the reality of knowledge resistance amongst would-be partners. Neither (as I have recently discovered in the course of my own project) has enough thought been given to the added complexity of engaging in real research structured by knowledge exchange purposes.

Behind all of this lies the fact that the research agenda is inflected by an underlying economic rationale – the UK’s global competitiveness – which is transmitted from government through the institutions.

It would be absurd to suggest that all the work we undertake is, or indeed could be harnessed to such narrow considerations. Or indeed, that we are sufficiently uninventive to know how to address these agendas. But there can be no doubt that the value system in which we work and the justifications that we are required to supply have indeed been incrementally altered and will continue to be so.

To conclude: it matters greatly whether we are problem takers or problem makers; it also matters how much we can take the initiative in supplying research as opposed to responding to demand; finally, it matters that genuine autonomy exists while recognizing that nobody operates free of constraints.

I’d like us to think about our work in this wider perspective, because we should take our distance from the underlying conditions that shape our research agendas. And it may well be that a commitment to public intellectuality will add credibility, scope and reach to what we do.