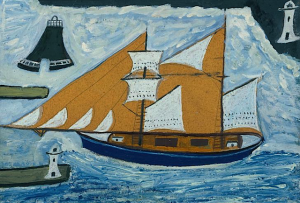 Detail of ‘The Blue Ship’ by Alfred Wallis, on display as part of the British Folk Art exhibition. Photo credit: Tate, the estate of Alfred Wallis.

Last month I had the opportunity to visit the British Folk Art exhibition at the Tate Britain in London, which runs until 31st August. This small but carefully-curated show will likely be of interest to copyright researchers and those interested in quotidian, outsider and craft art production. As someone who works on the intellectual property status of amateur media, I was drawn to this exhibition on a sunny Saturday in July, to find out if I could make any linkages between Kickstarter fan-fiction and the long trajectory of craft artisanship going back to Neolithic times. Knowing very little about folk art forms before my visit, it turns out there were many interesting connections to be made between current-day digital practices and the body of folk art presented in this exhibit.

The exhibition, curated by Jeff McMillan, Ruth Kenny and Martin Myrone, suggests that folk art has always been excluded by or produced in opposition to the professional artistic establishment. In contrast with mainstream or ‘high’ art from the same time period, 18th and 19th Century folk art was often constructed using craft tools rather than artistic instruments: needle and thread rather than paintbrush, mosaic and bricolage rather than more costly sculpture. Wool, fabric and wood were common folk art mediums. Folk art often performed a decorative role in everyday settings, through objects like quilt work, public murals and merchants’ signs. Folk art could therefore be enjoyed by everyday users, without needing to be situated in the aesthetic or political context of mainstream art. Subject matter frequently consisted of popular pursuits: sports, travel, animals and festival scenes. Many of the artworks depicted in the Tate exhibition have an intimate character: they served as a record of local events for local consumption. To that end, many pieces of folk art are not made to last more than temporarily: straw effigies and flower petal mosaics fulfill a purpose which is both spatially and temporally fixed. Other pieces seem to have been made not with an audience in mind, but to satisfy an intense personal interest. Of Alfred Wallis, a hobbyist painter of tall ships (pictured above), the curators write,

‘His art, deeply concerned with the physical and formal autonomy of the work of art as physical artifact, and arising from an untrained, apparently compulsive imagination, conformed to an ideal of the ‘primitive’ artist already current in [professional artistic] circles.’

The impression that I gained from the exhibition is that the folk artist is a figure in tension, sometimes conceived as idiosyncratic maker and other times as curator of community and collective identity.

Copyright does not seem to offer any meaningful incentive to the folk artist – the pieces themselves are not intended to last beyond the specific and temporally-bounded context for which they were made. On the other hand, folk art is exclusive in the sense that it is not easily reproducible. They are weighty physical objects, constructed with great skill and craft. Many pieces have taken years or decades to accrete, often having been started without a clear plan or direction. A house built entirely from sea-shells comes to mind – it would be impractical to copy or move it.

Amateur user-generated content does share some similarities with folk art from the past. Like the pieces in this exhibition, bottom-up creativity is still accomplished with the tools at hand – a cloud-based meme generator, a cameraphone, an instagram feed. Like folk art, there was for a while a kind of vernacular, DIY aesthetic to amateur online content that helped to distinguish it from mainstream commercial media. That distinction has quickly blurred, making it harder to discern the amateur from the professional. The market and the context have also changed. Although much user creativity is relationally embedded in social networks, those networks are now global rather than limited to the immediate community. Literacy – aesthetic, political, digital – is also more highly evident in contemporary amateur media. Unlike the pastoral scenes depicted in this exhibition, content of online expression is frequently political, connecting identity struggles and movements across geographic boundaries. Amateur digital creators continue to share one important characteristic with their folk artist forebears: by positioning user-led creativity in opposition to mainstream and commercial artistic work, the production process itself remains a political act.

Tickets are £14. Of note to copyright lawyers: photography is prohibited inside the exhibition.