CCPR-CREATe Lecture: ‘Media Freedom and the Regulation of Big Tech’

CCPR-CREATe Lecture: ‘Media Freedom and the Regulation of Big Tech’

In this blog, Zein Al-Maha Oweis doctoral researcher in Media and Cultural Policy reports on the CCPR-CREATe Lecture by Dr Damian Tambini, Distinguished Policy Fellow in the Department of Media and Communications at LSE. This lecture on ‘Media Freedom and the Regulation of Big Tech’ was chaired by Professor Philip Schlesinger, University of Glasgow.

The event took place on Tuesday 8 March at the University of Glasgow.

‘Media freedom’ is a contested topic of our day and age. Dwight Teeter  defines media freedom as, the freedom to criticise a government without facing any consequences before or after publication. With the emergence of online hate speech, fake news and unlawful behaviour online, governments in the UK and EU are considering regulating online speech with the introduction of legislation which potentially puts constraints on freedom of online speech and media freedom as a whole. 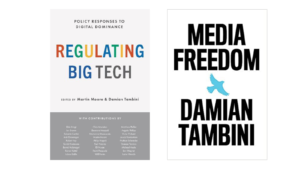 In his lecture, Dr Tambini discussed ideas of freedom of speech, press and media freedom and the relationship of these themes to law and policy. Using the UK and US as case studies, the speaker argued that the “negative rights approach that prevailed under the first amendment to the US constitution, and which became the default position of US based social media platforms, is no longer tenable”. In his books, the solo-authored Media Freedom and co-edited Regulating Big Tech, Tambini explores and analyses the framework that legitimizes media regulation in complex democracies.

As a journalism and media student, I was fascinated by the way that Dr Tambini shared his knowledge and research on the overlapping struggles for media freedoms in different democracies. These issues seem especially pertinent in the context of Russia’s invasion of Ukraine. The Russian government has placed restrictions on media freedom and information about the course of the war. It was noted that many independent journalists were fleeing Russia for fear of arrest under a new law implemented by Russia on traditional and digital media. In addition, Facebook and Twitter found themselves being banned in Russia while Netflix suspended its service in the country and TikTok limited its coverage and access. Not long after, EU President Ursula von der  Leyen announced a ban on broadcasting within the EU by Russia Today and Sputnik. In the UK, Ofcom issued fifteen investigations into Russia Today which later resulted in RT having its broadcasting licence revoked. This range of responses to the unfolding war in Ukraine illustrates how common events can affect the balance of media freedom differently in different territories.

This summary of current events allowed Dr Tambini to introduce and unpack key themes  identified in his most recent book Media Freedom. The speaker provided an overview of the history of media freedom in the UK, US and Europe in order to develop a new media freedom framework to evaluate the regulation of the media, internet and social media in response to events happening today. He developed these themes by posing the question: how to implement freedom of expression and media freedom around the world? In order to tackle the question, Tambini began by ruminating on the origins of notions of media freedom and the legal frameworks underlying these freedoms. To establish a working definition of media freedom the speaker invoked Rawls’s ‘A Theory of Justice’ in order to identify: who it is that’s free; what they are free from; and the things they are free to do. Dr Tambini also cited Habermas’s ideas on legitimacy of democracy, free media and the public sphere stating that in, “a legitimate democratic deliberative society and political system, it is absolutely necessary to separate the realm of truth from the realm of power. That is to have what he (Habermas) calls, “an autonomous self-regulatory media system”.  This fed into a discussion of institutional theory and the long-term implications for press freedom, broadcast freedom and, importantly, internet freedom which we battle with today as our lives have shifted to a digital one, underscored by the COVID-19 pandemic.

This raises some problems that media freedom has to face. One of these is how media freedom could be considered a right. Here Tambini referred to Article 11 of the European Union Treaty as it gives citizens the right to exchange their opinions publicly. He continued by giving a rounded summary of the historical background to how media freedom came to exist, interrogating the interpretation of the First Amendment in the US Constitution that protects freedom of speech and the press. Among the important historical milestones the lecture discussed was the reduction of newspaper taxation in the UK in the early 19th Century, so called ‘taxes on knowledge’, on the basis that newspapers delivered ‘good for society’. Newspapers sold both in the UK and the US were subject to reduced postage rates, a privilege  that effectively subsidised the distribution of news content to promote what the speaker described as ‘truth-seeking benefits’. Press freedom, Tambini argued, may be primarily seen as a “negative freedom” but, we were reminded about the positive support media freedom and press freedom have in the US due to the First Amendment.

Moving into the 20th Century, the lecture discussed how broadcast journalism has been regulated in the public interest analysing post World War II developments in how broadcast freedom and independence acquired further duties, benefits and rights. In the US, media and journalism have special privileges, such as the right not to disclose confidential sources or, in some cases, the information itself which Tambini interpreted as “institutional benefits”. The negative rights approach to freedom of the press, Tambini argued was instrumental and conditional on the media serving a particular public interest. It is not absolute.

There is a divergence between the US approach and that which prevails in Europe where international human rights standards are favoured and where there is more support for a positive institutional approach. In the internet era the US has defaulted to adopting the same regulations for freedom of the press and broadcasting. Platforms, to date, have been regulated using a hands-off approach.

In the UK, where regulatory intervention is being stepped up, the Online Safety Bill is being implemented. Ofcom, the communications regulator, has been thrust centre-stage. At present,  there is a shift to ensure that platforms are being regulated in a way that supports democracy instead of undermining it. Tambini’s analysis will be invaluable for those who seek to argue for principles of transparency, openness, and public involvement in enhancing the prospects for media freedom.

The lecture concluded with comments and questions from the Chair, followed by a number of interventions from the offline and online audience. This lively discussion revealed a diverse and, in some cases, divergent range of perspectives on the central themes and arguments advanced by the speaker. In summary, this incisive and thought-provoking lecture illustrated the challenges and tensions contingent in fostering and upholding media freedom in the ‘Big Tech’ era.