The wrong r/place and the wrong time for copyright and NFTs?

The wrong r/place and the wrong time for copyright and NFTs?

By Amy Thomas12 April 2022No Comments

r/place’s lifespan lasted all of 5 days, beginning on 1 April 2022, and ending on 5 April 2022. As a resurrection of an experiment hosted on Reddit in 2017, r/place offered a simple instruction to its users: to place coloured pixels on an empty digital canvas. The sole restriction to completing this blank canvas was that users were only permitted to place a pixel once every 5 minutes, making this a time intensive, collaborative process of constant upkeep, as users contested precious territory through pixels. Come the final day, r/place consisted of nearly 72 million pixels placed by over 6 million users, at a rate of more than 2.5 million pixels per hour. 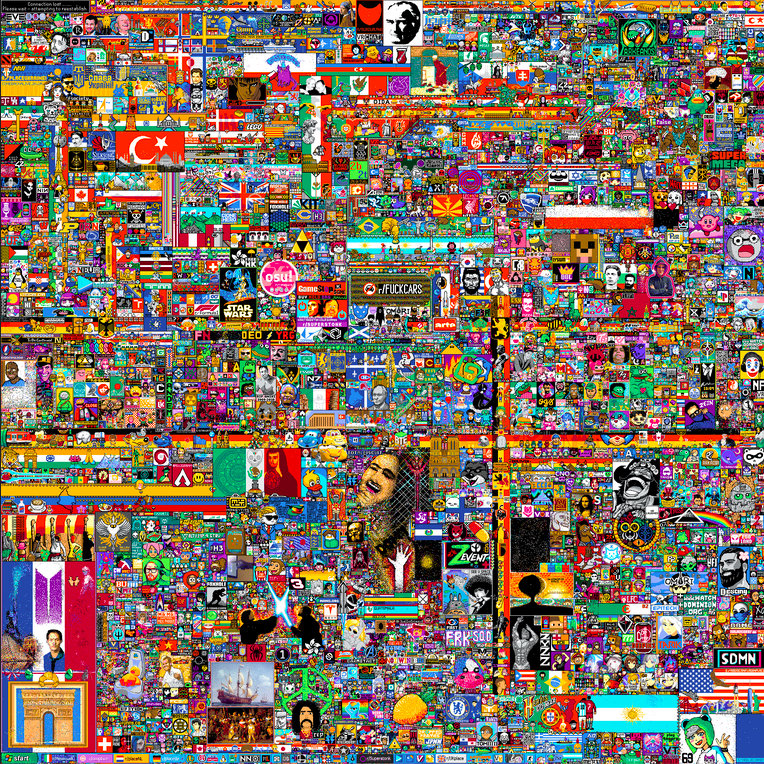 The result is an example of the internet at its finest and most chaotic, which can be appreciated both as a process and a final product. It is perhaps everything you would expect from such an experiment: memes, fandom badges and national flags feature prominently in the final piece. But r/place also included some (delightfully) unexpected additions: support for Ukraine in the Russia-Ukraine war (including a portrait of Zelenskyy in sunglasses, and debates over whether expletives surrounding Putin should be associated with the flag), memorials to Twitch streamers, and, incredibly, a fully functioning Rickrolling QR code. User communities somehow managed to co-ordinate efforts to replicate intricate and fine works of art (including Liberty Leading the People, The Night Watch, The Tortoise Trainer); others committed to more bizarre causes of, e.g. ‘the blue corner’ or ‘the green line’. There was of course a dark side: accusations of automated bots and rogue mods; erasure of progressive or inclusive imagery (much was made of the encroachment of the Union Jack into the Transgender Pride Flag); streamers and influencers commanding legions of fans to erase existing imagery in their dedication, and receiving death threats in return. In sum, r/place was both an incredible effort of collective creativity, but also toxicity.

r/place’s very existence is perhaps enough of a curiosity. However, this blog considers more specifically the user outcry against the sale of NFTs of r/place appearing on OpenSea, an NFT marketplace. At the time of writing, both the final canvas, and individual components thereof, are available as NFTs ranging from approx. 20 USD, to over 100,000 USD. 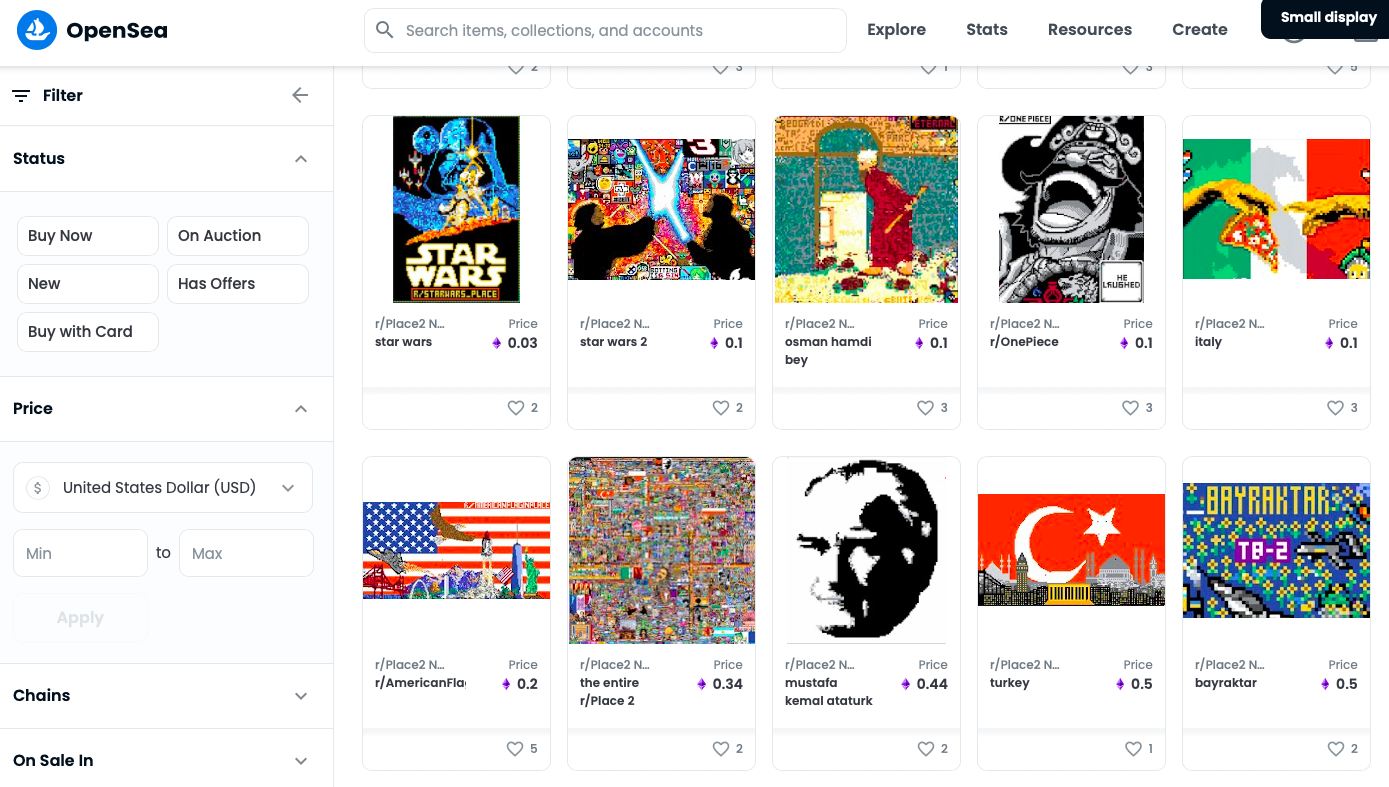 Importantly, sellers of NFTs from r/place do not appear to be claiming ownership of the copyright of the underlying content, or exclusive access to the same (though one may of course argue that this is tantamount to misrepresentation); rather they offer a promise to sell the unique metadata associated with screenshots of r/place, and a certificate of ownership attesting to their unique value. This promise has been more broadly interpreted to mean that one can, in principle, effectively own the ‘original’ copy of the associated digital artwork through the purchase of an NFT. The veracity of this promise has been thoroughly critiqued.

Regardless of the effectiveness of this promise, the very attempt to monetise r/place by associating it with an NFT has been received by a scathing Reddit community. In the resulting lengthy Reddit thread of unhappy users, titled ‘[w]e shall not let them sell’, copyright is often invoked as an important limiter to the NFT seller’s standing, and a way of challenging the use of openly available, community created content. Even if in principle the content behind an NFT can change at any time, an affirmative copyright would nonetheless be helpful for rightsholders seeking to prevent their works’ association with an NFT, by restricting the upload and communication to the public of the associated digital art. So, in this way, can the Reddit community, collectively, own any copyright(s) and do anything to stop the sale of NFTs of r/place?

Unsurprisingly, the answer is complicated. Indeed, the question forms part of a core tension in modern copyright when trying to account for collaborative, continuous user creativity. On the base question of authorship, how does copyright account for the massive, multi-million, multi-jurisdictional, user effort? A community claim to joint authorship of r/place is of course possible, and is not limited by size per se (though certainly makes coordination between authors trickier); but did the users of r/place have any intention to create a common design, or merge their work together to form a unitary whole (a common test of joint authorship)? Certainly, sub-Reddit communities clustered around efforts to build a particular contribution (e.g., the blue corner), but this may have been imagined quite separately from the chaotic final piece, or indeed been subsequently erased. Contributions from other communities may give a fundamentally different meaning from the original community’s intention when it encroaches on their canvas territory (e.g. Hollow Knight skewering a kebab on the Turkish flag). There are even more granular considerations before reaching this point – if joint authorship relies on the significance of a contribution per author, how many pixels must one author have to place to give them a copyright interest? Is one enough? Or the length of a placement, and if so, how long? What happens if a user places a strategically important pixel, only for it to be erased and subsequently replaced in a pixel ‘war’?

Further, as is often the case when users are presented with a blank canvas or sandbox, third-party copyrighted content is often quickly emulated. Notable in the final r/place canvas is the iconic Star Wars ‘A New Hope’ poster; manga and anime characters also feature prominently (e.g. the iconic laughing Gold Roger from One Piece, which is now available as an NFT). The suggestion here is that the harm of copying such content in association with an NFT extends not just to the user who made the recreation, but also to the original author whose copyright has been infringed by the recreation– a copyfraud, if the misrepresentation of ownership extends far enough (though one might argue this is an example of the pastiche exception). Other replications of public domain content, including country flags and classic works of art, remain open for ‘everyone to use (and abuse)’ (including NFT sellers), but nonetheless may attract a fresh copyright in the pixelated recreation, which would seemingly draw us back to the problem of the millions of users who (re)created it. 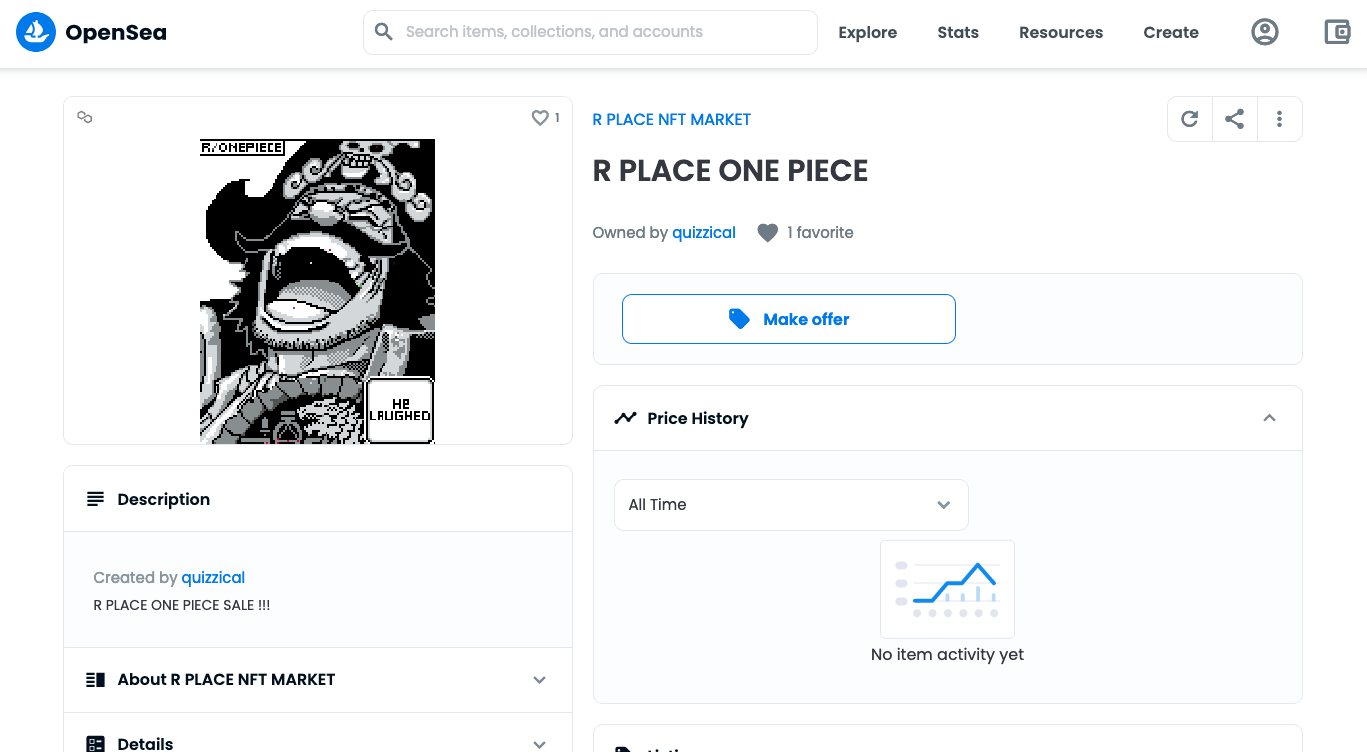 Others have suggested that, in any case, Reddit, as a platform, and not its users, is the true owner of r/place, because users signed away any rights over their copyright when agreeing to the platform’s terms of service. This is not necessarily framed as a bad thing by users on the thread – rather an assumption that they will collectively rely on Reddit, as the more powerful bargaining entity, to remove NFTs where they infringe its copyright. This is a common misconception. As is the case with many platforms, whilst the licence grant from the user to Reddit in respect of their content is broad, it is not an assignation, and copyright is still ultimately retained by the user. Nonetheless, through the non-exclusivity and transferability of the licence, Reddit grants to itself the power to make user content available for distribution and publication to other entities – feasibly the seller of an NFT. But this goes two ways – in substance, whilst Reddit could monetise r/place through this licence by selling it to someone else, so too could the user. The problem is of course that not even small parts of r/place are attributable to just one user, but rather a disparate collection of many, whose collective authorisation would be required for such a licence to be useful.

Not the time or place?

This blog is purposefully vague about offering a suggestion of who owns r/place: in this author’s opinion, the intention always was, from the outset, that no one should. It is fundamentally an open, collaborative, project where the whole is perhaps less important than the process of getting there: the pixel wars; the influencers commanding legions of fans and their subsequent receipt of death threats; deliberative community efforts to build intricate artwork in sub-Reddit communities.

Despite the jokes about ‘where are my royalties’, Reddit users’ suggestion to embrace copyright in order to combat the NFT is only purposeful in as much as the community is seeking to withdraw permission to have r/place content associated with this particular instance of monetisation. It is difficult to imagine that users would be any happier about the situation if Reddit itself claimed to wholesale own the copyright of r/place, even if it did in theory enable the platform to take action against NFT creators (at least, insofar as it would prevent them from using the art associated with the particular metadata of a screenshot – which would just make it more difficult to communicate exactly what is being ‘sold’). And if this is not the case, and if we should imagine a joint authorship scenario, would any copyright infringement claim against an NFT seller return any meaningful monetary reward once split between the millions of ‘authors’ of r/place?

In fact, and jokes about royalties aside, the question of monetisation/commercialisation does not seem to be as important to users of r/place as much as their oppositional stance to the ideology that NFTs perpetuate (and here noting the existence of an r/place community dedicated to writing F*CK NFTs on the final canvas). Commercial poster makers, for example, haven’t attracted the same ire as the sellers of NFTs. Instead, the frustration felt by the community is more targeted against, fundamentally, what an NFT purports to do in this scenario: manufacture the impression of scarcity, and ownership, over something that can’t, or shouldn’t, be scarce or owned in the first instance. Indeed, flipping the application of the NFT from the author (as a possible complementary function to copyright) to the user reveals an inherent vulnerability in the NFT system. It permits extra-community users to commercialise community created, openly available content, and manufacture monetary rewards, where none were sought in the first instance. If copyright does not necessarily help solve this NFT problem, then the infringement of the community spirit of r/place will inevitably call for a community solution – as one user asks: ‘how do we summon Anonymous’?