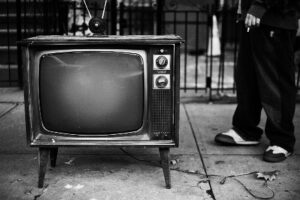 “My new television set” by Brandon King is licensed under CC BY-NC 2.0

CREATe postdoctoral researcher Kenny Barr has responded to the UK communications regulator, Ofcom consultation: ‘Small Screen: Big Debate – Public service broadcasters and the UK production sector’. The call seeks views on, ‘…how to strengthen and maintain public service broadcasting (PSB) for the next decade and beyond, in the face of unprecedented changes to technology, financing and viewer behaviour’. These themes have significant relevance to the recent DCMS Inquiry into the Future of Public Service Broadcasting, to which  CREATe also contributed.  The submission to Ofcom draws on work examining ‘terms of trade’ in the television production sector currently being carried out at CREATe as part of the AHRC Creative Industries Policy and Evidence Centre (PEC).

The focus of the submission is on the potential for the ‘terms of trade’ code of practice to be extended to Subscription Video on Demand (SVoD) services that are increasingly important commissioners of television content in the UK production sector. The ‘terms of trade’ established in the Communications Act 2003 ensure producers retain an interest in intellectual property (IP) subsisting in works commissioned by Public Service Broadcasters. This intervention had catalytic effects in transforming the dynamics of the UK television production sector. Currently, SVoDs are not governed by this code of practice, and as such are not required to share control of IP with independent producers (Doyle 2016). The submission recommends this apparent disparity should be examined by policymakers.

Any extension of ‘terms of trade’ to SVoDs must contain checks and balances to ensure UK producers are not made less attractive to investment from overseas broadcasters and SVoDs that is increasingly driving growth in the UK sector. This is a concern articulated by prominent voices in the independent production industry. In the PSB environment, the quota system compels commissioners to buy from independent suppliers. This suggests a similar complementary mechanism would be required if the implementation of ‘terms of trade’ for SVoDs was to be practicable.

The submission concurs with the government position that the UK should, ‘ensure continuity for provisions governing quotas for European works and the guidelines for European works’ (DCMS 2021). As SVoDs and other global players become increasingly prominent commissioners of content in the UK, attention should be given to the extent to which these services are required to participate in the production of content with a public service dimension (Ofcom 2021).  Consideration of amended definitions of qualifying content and qualifying independent production will play a significant role in this process. Crucially, the issue of regulatory parity between PSB and SVoD players in respect of IP rights in commissioned content must also be a central consideration.

More broadly, these themes have significant resonance with other research being conducted at CREATe into rights reversion and the assignability of copyright in the music industries. Indeed, it is apparent that commissioning practices in respect of IP in other areas of the AV sector, including music commissions for the screen industries, are also attracting the intensifying focus of industry stakeholders and academics alike.