New Working Paper – A question of (e)Sports: an answer from copyright

New Working Paper – A question of (e)Sports: an answer from copyright

CREATe presents the first entry in our series of working papers released in 2021: “A question of (e)Sports: an answer from copyright”. This working paper by Amy Thomas, a PhD candidate and Research and Teaching Associate at CREATe, University of Glasgow, is a pre-print version of an article published in the Journal of Intellectual Law and Property (JIPLP).

In the age of social distancing and self-isolation, eSports (i.e. competitive video gaming) have provided a fitting substitute for stagnating traditional sports events. With the suspension of many live, face-to-face events, eSports, as a born-digital industry, has managed to continue relatively uninterrupted through the pandemic, providing entertainment for new and existing fans alike. Whilst not necessarily a new industry in itself, this new topical interest in eSports provided the impetuous to complete the paper in time to mark 2020.

Whilst this paper was initially conceived as a response to an ongoing debate amongst sports philosophers (are eSports a ‘sport’?*), it has since evolved to a closely-related query as to the nature of eSports from a copyright perspective. Copyright plays an essential role in regulating eSports, being a derivative form of entertainment based on an underlying creative work – a video game.

In this respect, eSports are distinct from traditional sports, such as football and tennis, which cannot be owned by any one rightsholder. By contrast, a video game cannot exist without a creator, eSports become owned by game publishers. The doctrinal analysis offered by this working paper confirms the same, with the relatively simple (and predictable) outcome that all downstream usage of that game becomes dependent on the rights and permissions granted by said publisher.

However, the consequences of this application are more complex. In many ways, eSports are more than ‘just a game’, with many of the same economic stakeholders as in traditional sports. There are professional players, who specialise and train in specific games, dependent on game access for their livelihood. Tournament organisers rely on commercialising game footage to promote and create spectatorship for the industry. For both, their activities are premised and conditioned by copyright. In other words, the consequences of the simplistic application can have complex effects on people’s social, economic and legal realities.

* Whilst there are many intellectually stimulating discussions surrounding this, most of these discussions did not make the cut for the final paper. One of the most notable is the outcome of the discussions of the International Olympic Committee of 2018, who refused to include so-called ‘killer games’ in the Olympics. To the Committee, violence in games represented a ‘red line’ to their inclusion, unlike sports which are ‘civilised expressions’ of violence (such as fencing, shooting, boxing and archery).

eSports is a nascent industry of considerable commercial value that is fundamentally underlain with creative works—video games. Despite this, no legal scrutiny has been given to the copyright status of eSports in the UK context. By using copyright as an analytical tool, this article assesses the conceptual boundaries of eSports to better understand the legal status of this new industry to help inform future regulatory efforts.

In analysing the subject-matter positions of the three key eSports actors—the game rightsholder, the tournament organizers and the professional players—this article concludes that the copyrightable status of a video game results in the control of all further downstream usage of that game. This is in stark contrast to the copyright treatment of its most frequently cited bedfellow—traditional sports.

This article proposes that the interpretation of existing broader principles of copyright may achieve a better balance of interests between eSports actors. In doing so, comparative reference is made to South Korea as the genesis of the eSports industry. 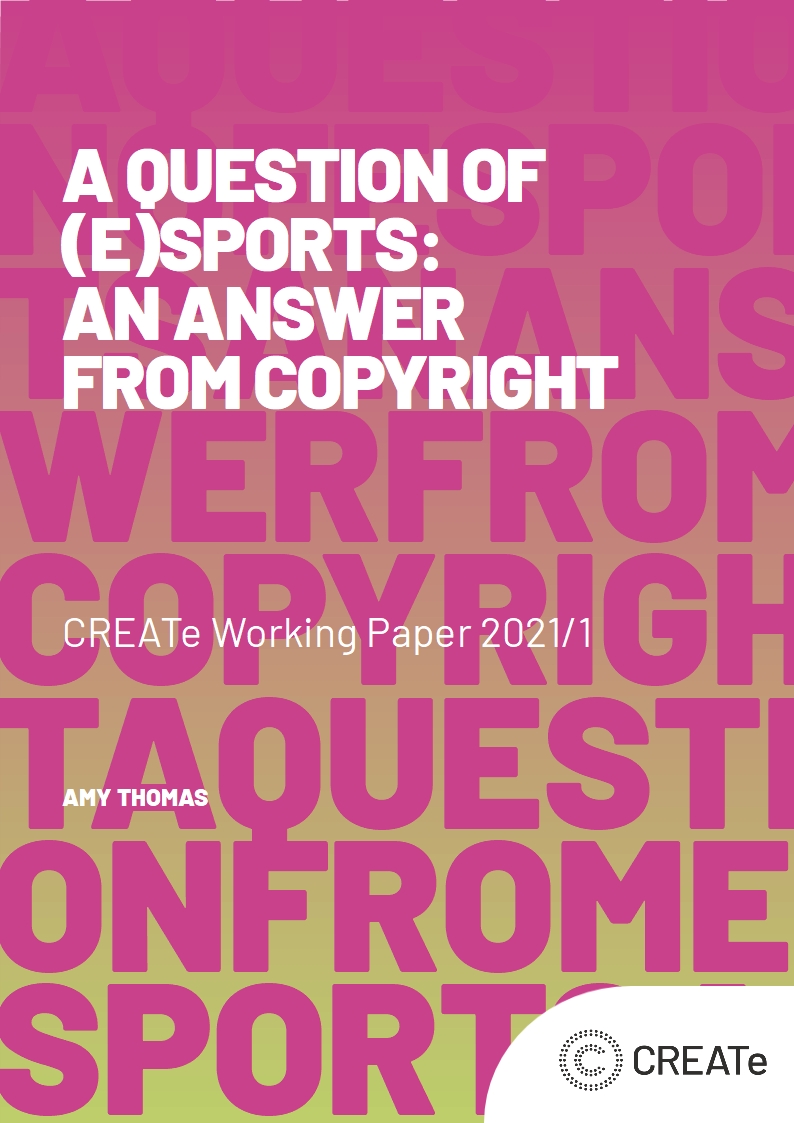