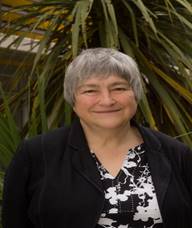 The second of CREATe’s Spring 2019 Public Lecture Series featured Prof. Alison Firth (emeritus professor, University of Surrey, visiting professor QMUL and Newcastle Law School) presenting on “Trade deals and disputes – copyright as a possible model?”. Taking place on the 20th of February 2019, the event was chaired by Dr. Marta Iljadica, and took place in the University of Glasgow’s Arts and Humanities Theatre.

Framing her presentation in the context of Brexit, and the question of the UK’s new role in the global IP system, Prof. Firth posed a challenging question: is it possible to make use of existing copyright treaties meaningfully in a society facing rapid social and technological changes?

As such, Prof. Firth argued that existing agreements, particularly TRIPS, actually still have workable contents in the digital era – provided that they’re interpreted in the appropriate way. Outlining the various interpretative approaches (including literal, intentionalist and purposive), she showed that the most appropriate is an evolutive approach, akin to that used in the European Court of Human Rights (ECtHR). If existing agreements are viewed as “living instruments”, rather than static agreements, then they may be interpreted in such a way as to reflect social and technological changes in the present day. 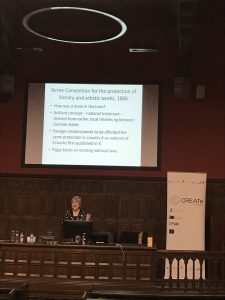 Indeed, the ECtHR and TRIPS share many important features: both impose minimum rights that apply domestically; increasingly, both apply horizontally between private parties rather than a purely vertical state-to-private party relationship; both have resolution mechanisms; decisions are internationally binding, and so on. Nonetheless, Prof. Firth cautioned that there are also important differences. First, the ECtHR hears a huge number of cases in comparison to TRIPS (vis-à-vis the WTO dispute resolution panels), allowing it to develop interpretations in incremental steps and is thus truly, and gradually, evolutive; by contrast, the lower number of cases heard under TRIPS mean new interpretations are much more revolutionary. Second, we must question whether in the case of IP if it is appropriate to treat commercial rights in the same way as human rights – arguably, commercial rights require a more certain approach.

Several interesting discussion questions followed Prof. Firth’s presentation. If we continue reinterpreting older treaties, do we risk simply repeating and rehashing unhelpful concepts? Otherwise, does such an interpretative analysis lead to a piecemeal approach, that may have been better solved with the negotiation of a new agreement?

Prof. Firth’s position highlighted the need to look at existing agreements in a broader, contextual and more evolutive manner. In particular, re-purposing IP treaties in this way may in fact be more effective in an era of rapid technological changes, where even the newest of laws often become rapidly outdated.