By Bartolomeo Meletti5 June 2018No Comments 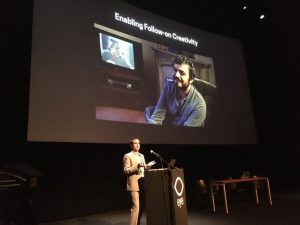 On 27th May 2018, I participated in a panel titled Resisting Copyright and Its Archival Implications, organised and chaired by Claudy Op den Kamp (Bournemouth University) as part of the EYE International Conference 2018 (EYE Filmmuseum, Amsterdam, 26-29 May 2018).

The panel – which included Prof Peter Jaszi (American University) and Wendy Bevan-Mogg (Bournemouth University) – explored the relationship between copyright law and found footage filmmaking, focusing on the role that copyright exceptions (EU / UK) and fair use (US) play in enabling the creative reuse of existing works. The session ended with the launch of Claudy Op den Kamp’s book The Greatest Films Never Seen: The Film Archive and the Copyright Smokescreen.

Each panelist was given a clip from a short film and had to speak for 10 minutes on the relationship between copyright law and creative practice based on that clip. Below you can find the transcript of my presentation (and slides to download), which follows on from findings from the event Copyright & Creative Reuse which was organised by CREATe and held at the BFI on 8th December 2017, and in particular on Prof Lionel Bently’s talk.

“Good evening everyone. My name is Bartolomeo Meletti and I work for CREATe, the UK copyright research centre based at the University of Glasgow. I am currently on secondment to the British Film Institute, where I work on the Copyright User initiative: an independent online resource intended to make UK copyright law accessible to everyone.

During this short presentation – titled Lawful Creativity or Creative Lawfulness – I would like to use a clip from the short film Missing Episode to share some thoughts on the complex relationship between copyright law and creativity – that is: how the law influences creative practice and vice versa – and in particular on the relationship between copyright exceptions and the creative reuse of existing works. Let’s watch the clip.

This was the opening clip of Missing Episode, a short film directed in 2017 by Charlie Lyne, and written and performed by Ross Sutherland. In the film, Ross Sutherland uses an episode of the iconic British soap Eastenders to tell the story of a car crash he and his friend experienced while that episode was being broadcast on 7 October 1997. There are several curious links between Ross’s story and that particular episode of Eastenders, which I don’t have time to examine. What I think it is interesting to note in the context of this panel is that the filmmakers have adapted a copyright protected work – the episode of Eastenders – without permission from the copyright owners, as they believed their use was allowed by copyright exceptions. We have just heard Peter Jaszi talking about fair use, which is a doctrine in US copyright law. In the EU, we don’t have fair use but our equivalent to it are copyright exceptions: specific cases in which under certain circumstances it is possible to use other people’s copyright works without permission. There are fundamental differences between US fair use and EU copyright exceptions: for example, unlike fair use, copyright exceptions are traditionally linked to a specific purpose such as education, research, preservation, and so on. We will get back to this in a minute.

And why is it important to have exceptions, fair use and other limits to copyright? Why can’t we rely exclusively on licensing – that is: on the mechanism of securing permission from copyright owners – to enable the creative reuse of film and other works? Well, for a number of very important reasons. First of all, we need exceptions to safeguard fundamental rights such as freedom of expression. For example, without exceptions like parody or criticism and review, copyright could be used to hinder political dissent and social commentary. Exceptions are also needed to enable the preservation of our cultural heritage, which is what you do here at the EYE Institute, and to facilitate education and scholarship, among other things. In other cases, we need exceptions to enable the creative reuse of existing works when licensing fails to do so, because often securing all the relevant permissions is so complex and the kinds of creative reuse that are intended are of such low value that licensing is just not realistic.

When licensing is accessible and feasible, it is a great way through copyright complexities because it reduces the risk of infringement potentially to zero. But that’s often not the case. In the case of Missing Episode for example, if the authors could have not relied on exceptions, they simply would have not made the film. And this is a quite illustrative example of how complex licensing can be: Missing Episode was commissioned by the BBC, who also owns Eastenders. So one may think it would be an easy licensing situation: the BBC would just need to give Charlie Lyne and Ross Sutherland permission to use their own footage. Well, it wasn’t that easy. Apparently, every single actor who appears in that episode of Eastenders had an individual contract with the BBC with different terms, so if Charlie and Ross wanted to use that episode under a licence, with all the relevant permissions in place, they should have contacted every single actor to get their permission. In other words, they would have not produced Missing Episode.

That’s why they opted to rely on copyright exceptions instead. To do so and get their film broadcast on the BBC, they needed insurance. And the insurer needed to see a letter by a lawyer stating that the use of Eastenders was covered by exceptions. The lawyer that Charlie contacted considered that most of their use was covered by the exception for criticism and review, especially the parts where Ross provides an explicit critique of the soap opera. For the parts in which Eastenders is playing in the background but the actor doesn’t engage with it, interestingly the lawyer argued that the parody exception would apply, as this kind of background use has a lot in common with the mashups and parodies developed on the internet that led to the introduction of the parody exception itself in the UK in 2014. I find this piece of advice interesting for two reasons: first, I think it’s interesting that the lawyer cites current creative practice to demonstrate the lawfulness of the use. Second, it’s curious that he provided such a broad interpretation of the parody exception.

The parody exception is one of those exceptions I mentioned earlier, which is linked to a specific purpose: in order to benefit from the exception, your use must be for the purposes of caricature, parody and pastiche. In my view, although I am big fan of broad interpretation of exceptions, playing a TV show in the background while you talk about something else doesn’t really connect with any of these purposes. However, in addition to parody, in 2014 the UK government also introduced a new quotation exception, which allows the quotation of any type of copyright works for the purposes of criticism or review or otherwise. That ‘or otherwise’ makes a huge difference: for the first time ever in the UK, we now have an exception that – similarly to US fair use – is not limited by purpose, but only by the type of use: quotation. So now the key question is: what is quotation? In legal terms, we don’t know what quotation means (at least in the UK) because the exception has not been tested in courts yet. But I think that even before trying to figure out from a legal perspective in which cases the exception would apply, first we need to understand what quotation means in different cultural and creative sectors. Most of us understand quotation in text, but how about quoting a film or a painting? Going back to the title of my presentation – Lawful Creativity or Creative Lawfulness – I think this is a case of ‘creative lawfulness’ in a sense: I think it is the sector, the creators, people like Charlie Lyne and Ross Sutherland, who quote films in their creative practice and whose film is being quoted, that should define what quotation means in their creative field. In this respect, I think we can learn a lot from the excellent work that Peter and his colleagues have done in the US on the Codes of Best Practice in Fair Use. Their work demonstrates that creators and cultural heritage practitioners can and should play a crucial role in defining ambiguous but fundamental legal concepts underpinning their activities.

To conclude and try to connect some of the things I have said with the theme of this conference (Audio-Visual Collections in Civic Engagement, Political Dissent and Societal Change), I wanted to show you the quotation exception implemented in the Dutch Copyright Act (source: https://www.ivir.nl/syscontent/pdfs/119.pdf):

It is not regarded as an infringement of the copyright in a literary, scientific or artistic work [a category which also includes film in Dutch copyright law] to quote from the work in an announcement, review, polemic or scientific treatise or a piece with a comparable purpose, provided that:

I find the term ‘polemic’ – polemiek in Dutch – particularly evocative in the context of this conference: in a sense, the Dutch legislator recognises that if you want audio-visual collections to be used in civic engagement, political dissent and societal change, you need a quotation exception in copyright law, or a quotation right as Dutch academics define it. I also wanted to draw your attention on two aspects of this provision: the term ‘comparable purpose’ which, similarly to ‘or otherwise’ in UK law, makes the exception rather open-ended; and the condition according to which the quoting must be in accordance with what ‘social custom regards as reasonably acceptable’; and again, I think it should be the sector to define what is reasonably acceptable in this context. Thank you.”