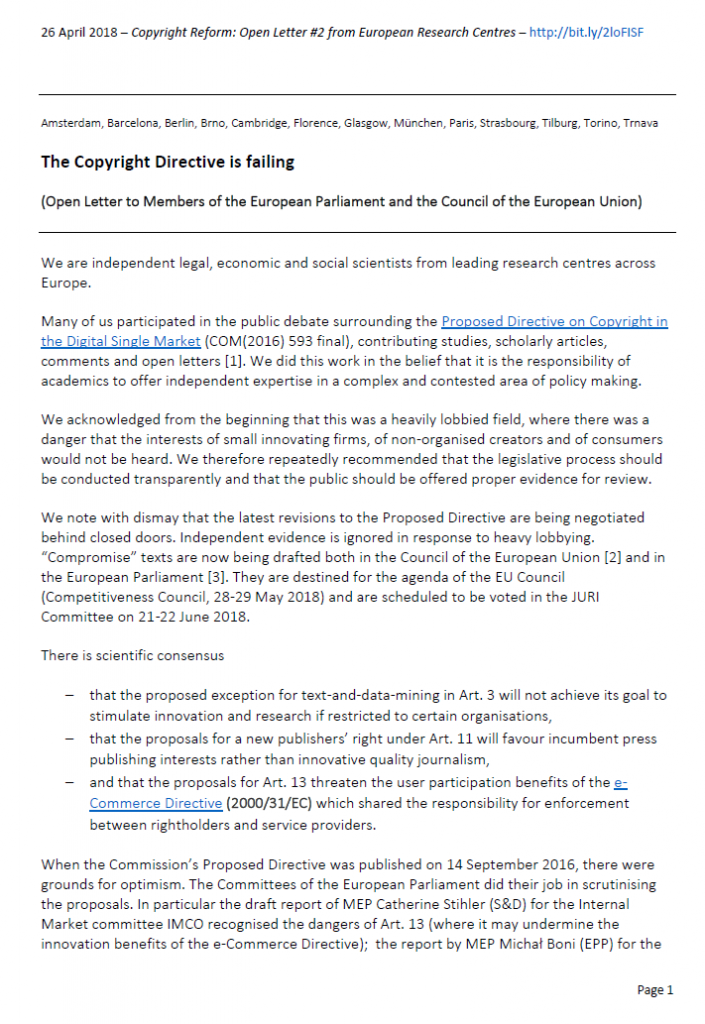 Academics from 25 leading Intellectual Property research centres in Europe have published an open letter, expressing grave concerns at the legislative direction of the proposed copyright directive.

After a balanced draft report by the European Parliament’s Rapporteur Therese Comodini (Comodini Report, issued on 10 March 2017 [LINK]), recent texts coming from the new Rapporteur Axel Voss [LINK] and the Bulgarian Presidency [LINK] of the Council of the European Union appear to be sliding towards a compromise that fails the aims of the Directive to improve choice, access and fairness in the digital environment.

There is scientific consensus
–      that the proposed exception for text-and-data-mining in Art. 3 will not achieve its goal to stimulate innovation and research if restricted to certain organisations,
–      that the proposals for a new publishers’ right under Art. 11 will favour incumbent press publishing interests rather than innovative quality journalism,
–      and that the proposals for Art. 13 threaten the user participation benefits of the e-Commerce Directive (2000/31/EC) which shared the responsibility for enforcement between rightholders and service providers.

The Open Letter (reproduced below) articulates these concerns.

These concerns are now widely shared. Yesterday, 169 academics warned against the ill-conceived plans for the introduction of a new intellectual property right in news. [LINK].

A broad spectrum of stakeholder groups have submitted representations that the Copyright Directive in its current drafts will not be in the public interest.

At tomorrow’s meeting (27 April) of the Committee of the Permanent Representatives of the Governments of the Member States to the European Union (COREPER), the Bulgarian Council Presidency will seek a mandate to negotiate on the copyright reform with the European Parliament. This should be resisted until the Parliament had an opportunity to vote on its position.

The Open Letter is reproduced below, and available for download here [LINK]. Further resources, including access to independent evidence to assist the legislative progress can be found here [LINK].

The Copyright Directive is failing

We are independent legal, economic and social scientists from leading research centres across Europe.

Many of us participated in the public debate surrounding the Proposed Directive on Copyright in the Digital Single Market (COM(2016) 593 final), contributing studies, scholarly articles, comments and open letters [1]. We did this work in the belief that it is the responsibility of academics to offer independent expertise in a complex and contested area of policy making.

We acknowledged from the beginning that this was a heavily lobbied field, where there was a danger that the interests of small innovating firms, of non-organised creators and of consumers would not be heard. We therefore repeatedly recommended that the legislative process should be conducted transparently and that the public should be offered proper evidence for review.

We note with dismay that the latest revisions to the Proposed Directive are being negotiated behind closed doors. Independent evidence is ignored in response to heavy lobbying. “Compromise” texts are now being drafted both in the Council of the European Union [2] and in the European Parliament [3]. They are destined for the agenda of the EU Council (Competitiveness Council, 28-29 May 2018) and are scheduled to be voted in the JURI Committee on 21-22 June 2018.

There is scientific consensus

When the Commission’s Proposed Directive was published on 14 September 2016, there were grounds for optimism. The Committees of the European Parliament did their job in scrutinising the proposals. In particular the draft report of MEP Catherine Stihler (S&D) for the Internal Market committee IMCO recognised the dangers of Art. 13 (where it may undermine the innovation benefits of the e-Commerce Directive);  the report by MEP Michał Boni (EPP) for the Civil Liberties committee LIBE emphasised the Charter of Fundamental Rights and that Art. 13 should not impose a general monitoring obligation; the report by MEP Zdzisław Krasnodębski (ECR) for the Industry committee ITRE drew attention to the narrow scope of the proposed Art. 3 exception for text-and-data-mining.

In the lead Legal Affairs committee JURI, rapporteur Therese Comodini Cachia (EPP) produced a balanced draft report, published on 10 March 2017 [4] that replaced the deeply problematic new publishers’ right in Art. 11 with a presumption that gives press publishers standing to sue. Comodini’s report also opened the text-and-data-mining exception under Art. 3 to all, and clarified the obligations on service providers under Art. 13.

Comodini resigned as a MEP in June 2017 to take up a seat in the Maltese Parliament and Axel Voss, a German MEP from the EPP Group, was appointed rapporteur. The legislative drafts that have since emerged from his office as well as from the Bulgarian Council presidency (since January 2018) pay lip service to authors’ interest but respond in effect to the agenda of powerful corporate interests.

There is a tremendous amount of noise and misinformation. “Fake news” is dressed as a copyright issue (which can only be characterised as cynical), and the misleading rhetoric of a “value gap” clouds the true nature of the issues for online platforms.

Comodini’s draft report for the JURI Committee in our view still offers the most workable basis for progress because it was based on wide and transparent consultation, taking into account scientific evidence.

If the legislation progresses in the form proposed by the recent drafts of the Bulgarian Presidency and JURI rapporteur Voss, we call on you to reject the Proposed Directive altogether. It will not serve the public interest.

The Copyright in the Digital Single Market Directive is now failing its stated goals to improve choice, access and fairness in the digital environment.

First signatories include academics of the following Research Centres: