A neighbouring right for publishers? The European Copyright Society responds 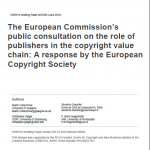 The European Copyright Society has submitted an Opinion in response to the European Commission’s public consultation on the role of publishers in the copyright value chain that took place between March 23 and June 15, 2016.

Drafted by CREATe Director Prof. Martin Kretschmer with Prof. Séverine Dusollier (Ecole de Droit de Sciences-Po, Paris), Prof. Christophe Geiger (CEIPI, University of Strasbourg) and Prof. P. Bernt Hugenholtz (IViR, University of Amsterdam), the Opinion (1) analyses why an intervention creating a new neighbouring right for publishers is being considered in the wake of recent decisions by the CJEU in Reprobel (2015), and the German BGH (2016) in Verlegeranteil; (2) examines the rationale for neighbouring rights; (3) advises against double layering of rights; (4) assesses the implications of a neighbouring right for publishers for “open access” policies; and (5) identifies regulatory design flaws in the introduction of an ancillary right for press publishers in Germany (2013) and Spain (2014). In conclusion it is argued that value generation in itself is not a good case for intellectual property protection, and that the onus of proof needs to lie with the proponents of a new right. They need to show what the costs are, who will carry them, that the costs are necessary and proportionate, and provide verifiable evidence.

This entry was posted in CREATe Blog, Working Papers. Bookmark the permalink.