By Andrew McHugh17 October 2014No Comments 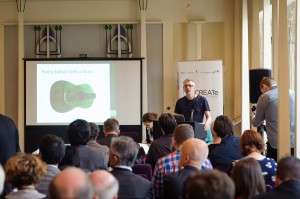 Object? Document? Both! Steve Benford describes his efforts to create a self-describing instrument, The Carolan Guitar

Steve Benford, from Horizon at the University of Nottingham, presented first within this session, offering a presentation about ‘The Carolan Guitar’, a project which combines the traditional craft of luthiery, i.e. guitar-making, with a new technology called Aestheticodes, creating a hybrid craft practice. Aestheticodes function like QR codes; when you scan them, they connect you to a specific URL associated with that code. The codes can be drawn by anyone; they work on the basis of regions which contain different quantities of blobs. In contrast to the traditional QR code, which is made up of black and white squares, Aestheticodes can include line drawings and engravings, making them suitable for artists or graphic designers in a variety of mediums; on paper, on fabric, or engraved onto a guitar.

The capture of such stories (or data) raises questions around the ownership of the underlying material, and how gathering permissions for such data might be managed, alongside the opportunities and challenges associated with passing on stories and objects. Edina Harbinja, in her doctoral work on the bequeathing of novel digital assets, and Megan Rae Blakely’s PhD on intangible cultural heritage, which includes traditional craft practices and storytelling traditions, also deal with these questions. Using an object as a basis for a community platform, where information, stories and experiences are shared, also raises the possibility of appropriating experiences and content generated by the guitar, and gifting that material to others, in an aesthetic experience which is both physical and digital.

Next up, Megan Rae Blakely from the University of Glasgow introduced her doctoral research, which broadly considers the sociological, economic and cultural effects of the IP regime on Intangible Cultural Heritage (ICH), with a particular focus on the legal framework in this area.

Living heritage is shared and passed down from generation to generation, but who owns it? Any original IP is expired, and the ‘property’ may have had multiple owners, and while it is not protected, it has to be defined in the law. The danger is that, because ICH is evolved by a practising community, any attempt to define or protect it by law can ossify it. The assumption is that in order to protect ICH, it must change in some way, to qualify for protection and fit the IP bucket. Both WIPO and UNESCO have emphasised the fact that ICH has value, and UNESCO has gone so far as to create a treaty for the Protection of ICH, but developed countries have not signed up – the perception is, because developed countries are no longer under-developed, they don’t have any ICH to protect. This is a problematic separation, on which there is very little literature available.

Megan is planning to explore these issues further through three case studies. The first will look at government intervention in Scotland, where community-run tartan registries have been co-opted by the government, in order to centrally regulate the production of new tartans, which could have a variety of effects within the clans, festivals and culture of Scotland.

The second case study will examine The Gathering, which is an example of domestic cultural branding in Ireland.  The Gathering is designed to encourage family and ancestral tourism to Ireland, creating an economic driver to counteract the recession. It involves targeted marketing, where relatives are encouraged to buy branded materials to host Gathering parties, and share photos and materials from the events afterwards.

The final case study will consider Welsh Language, and the provision made for Welsh Language by the Welsh Assembly and by community self-regulation, including education policy, festivals and traditional practices. 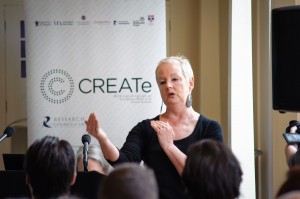 Barbara Townley introduces her work, questioning whether copyright is central to creative production

Raymond Boyle, also from the University of Glasgow, presented some of the findings from his work in Sports Rights. Raymond’s research explores the impact of various legal challenges on the value of national and international rights for football for both broadcast organisations and football rights holders including the FA and UEFA. He began by pointing out that while they sit outside the creative industries, sports are key content for television broadcasters. He also highlighted the fact that there is growing legal and commercial interest into whether copyright can be incorporated into sports rights negotiations, attracting interventions from the EU commission and courts.

Research methods used so far have included policy analysis and interviews, including the Scottish Football Association (SFA), Football Association, English Premier League (EPL), BBC, Union of European Football Associations (UEFA), Sports Content Businesses, Sports Lawyers, and commercial TV companies in Europe. Much of the discussion generated by the interviews has focused on copyright in broadcasts, with some respondents noting that EPL contracts have been rewritten to reflect this. Other effects noted include the fact that live fixtures have been limited and graphics have been increasingly embedded in coverage. The ability to sell sports rights in different territories, with football as the catalyst, has expanded, and a range of digital platforms are now available to consumers. Some respondents also reported that bundling of rights has become less of an issue over time, with the SFA reporting that they benefit from bundling in the Middle East/Asia territories.

Raymond emphasised the fact that there is no one size fits all model for the industry; the move from linear to non-linear rights has emphasized that ‘Live-ness’ is the crucial value. A similar theme could be observed in the music industry; where once music rights had recording value, they now have live value, but Raymond warned against making such generalisations and comparisons.

He observed that advertising is still a part of business models in the sector, but that copyright is less of a burden to producers than competition law, and that access to finance continues to be a key blockage. The evidence garnered from the interviews has produced complex and nuanced positions toward copyright, with concern over infringement varying widely. Some respondents have reported that new forms of infringement can highlight new revenue streams for content providers. An example of this is the popularity of Vines. The EPL have attempted to clampdown on them, as a result of selling a clips right package to the Sun and the Times, while the National Football League has stated that they think Vines are important and a beneficial aspect of the live experience for fans.

In conclusion, Raymond reiterated the fact that policing is an essential part of the research design in this area: patterns of distribution, licensing or infringement may emerge, but become disrupted very quickly.

Barbara Townley from the University of St Andrews closed the afternoon session by presenting the results of research conducted with small creative companies, start-ups and sole traders. The project aims to answer the research question, is copyright central to creative production? The research methods consist of a synchronic view, which consists of a snapshot of sole traders, and whether they recognise IP as part of their production. Creative Scotland have also provided an overview of sector policy. The second method used is a Diachronic study, looking at SME experiences from the start to the finish of the project timeframe, and what role IP plays during this time.

The project staff have used the economisation literature to develop a theoretical framework for the research. Their starting point is that property is an achievement. The synchronic view method consists of 122 interviews across 9 sectors, including design, fashion, IT, film and others. The diachronic study method has utilised observation and interviews.

One of the first results of the research has been the recognition of sectoral differences; those in the games industry know more about economics, whereas in fashion, there is little understanding of IP. Creatives working in design and textiles see little financial reward in copyright, and consider moral rights to be more important for their work.

The team have found that IP is entangled in the creative process; for example, in fashion, copying is part of pedagogy, a dialogue between past and present. In the Games industry, it’s become part of how they work. Definitions and ideals of authorship consist of community, tradition and ongoing practice. Reactions to evidence of copying have proved problematic; sometimes pity, not anger, is the reaction, because the need to copy shows a deficiency in the copier. Respondents have described their reliance on their network to identify copies and plagiarism, because enforcement is so difficult. For them, protection consists of keeping ahead, intellectual know-how and relying on non-copyable expertise. 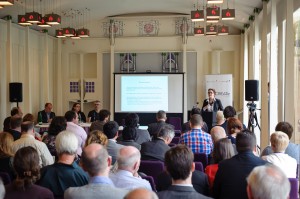 Nicola Searle of the Intellectual Property Office lead the response to the panel, accompanied by journalist and performer Wendy Grossman

Responding to the presentations, Nicola Searle of the UK Intellectual Property Office (IPO) suggested that the thread pulling them together was passion and understanding. She highlighted the layered nature of the IP in many of the situations described, and discussed the tensions between innovation and creativity vs. culture and creativity. The presentations have shown that social norms enforce IP, and while one size does not fit all, there are definitely areas of overlap and similarities between sectors; and these similarities must be built upon. Nicola finished by emphasizing the wider concept of intellectual assets: IP is important but not always essential, or central to all business models in the creative industries.

Wendy Grossman, Folk singer and Netwars journalist, closed the session by commenting on the fact that work always exists, it simply moves sector. Those experiencing turbulence in the music industry, or in publishing, may find safe harbour in another area of the creative economy.