By Andrew McHugh16 October 2014No Comments 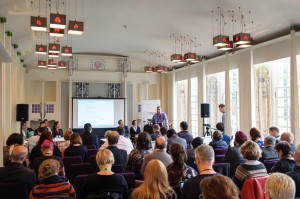 University of Edinburgh PhD candidate Nevena Kostova reports on the CREATe Results – Games, Audio-Visual and the Digital World session at the September CREATe All Hands Conference.

The second day of the CREATe All Hands Conference, which took place in Glasgow from 15-16 September, opened with a panel on Games, Audio-Visual and the Digital World. Six speakers presented on the development of their projects under these wide ranging themes, followed by commentaries from three respondents.

Tom Phillips from University of East Anglia presented first on the topic of games. One of the main questions underlying his project is when and how legal perspectives affect the practice of game developers. Within the framework of the project, the investigators are interested in exploring game developers’ awareness of legal issues and significance of these issues, as well as the barriers and opportunities for new business models.

To date the research team has completed a study of academic as well as industry literature and have also conducted two workshops with a wide range of stakeholders, including games and TV industry participants and independent game developers across the UK. In addition, results from an informal survey of game players have assisted in the identification of some of the relevant themes.

The first theme concerns the business models in the games industry, in particular, the free to play, i.e. ‘freemium’ model, whereby a game attempts to generate revenue through in-game advertisements or game experience enhancements. Within this business model, Phillips explained, there appears to be tension between producing a good game and a profitable game.

A second theme focuses on issues of intellectual property, in particular the cloning of games, i.e. the production of games that copy (aspects of) other games. Here too, there seems to be tension, albeit of a different nature. While the code of games is protected by copyright, it appears to be widely acknowledged that new games take motivations from already existing works. Hence, it is perceived that copyright enforcement would limit creativity.

A final theme explores the relationship between the games industry with other industries. It was found that the television industry is more risk averse, willing to bank on existing opportunities with business models being built around well-established hits, while the games industry in contrast, appears to be fast moving and more willing to test new grounds.

Kris Erickson from the University of Glasgow offered the session’s second presentation, on the Kickstarter Public Domain Project. At its core, the project attempts to valuate the public domain. One of the objectives is to find out how public domain works are being used and exploited in the UK creative industries. In order to do so, investigators have looked at Kickstarter and identified four possible ways of using it: 1) to develop and publish original content; 2) to obtain a license and re-publish existing content; 3) to re-present a public domain work, and 4) to significantly transform a work (which could fall under any of the previous categories) into something different.

One of the questions that researchers addressed was how Kickstarter can influence a work’s chances of success on the market. In this respect, it was considered that one of the features of the platform is the information asymmetry between the project pitcher and its backers. How can this information asymmetry be overcome if it presents a challenge to a work’s success? Erickson listed a number of ideas, including the development of rating systems to establish the reputation of sellers over time, the conduct of due diligence tests, or the introduction of stricter regulations.

Having explored a large dataset of cases, looking at different variables, such as the funds raised, the main source of IP underlying a work and the number of previous projects of the pitch creator, Erickson presented a few tentative results. In brief, the investigators have found that many works on Kickstarter are transformative in nature. The comic book category of works appears to have the highest percentage of public domain re-use, as opposed to video games and publishing, which are rather low. It seems that when public domain elements are used, such works are more likely to succeed than works which do not use public domain material.

Erickson concluded that the next steps in the project would involve linking and explaining these findings and understanding the sectoral differences in order to address the underlying questions of the project. 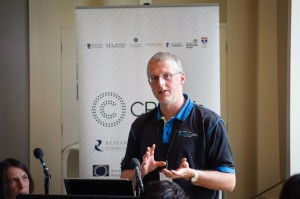 Richard Mortier of the University of Nottingham was the next to speak, presenting work ongoing within the Open Platform Project. The project aims to specify and implement an alternative open social networking platform where the user community can better manage and control their online presence. The project also studies how users can be engaged with such a platform.

To date, researchers have explored how creators interact with audiences in the online environment, for instance in the context of web comics and the relationship between amateur musicians and their audiences when it comes to the distribution of their musical works through social media networks. More generally, they have looked at how people share information on platforms, what type of information they put up and whether (and how) they distinguish between different media and manage their content respectively. This background knowledge will feed into the design of the platform, which is in the process of being built.

Bartolomeo Meletti then described another online project, the Copyright User Portal. This resource was launched in March 2014 and its content was produced with the help and collaboration of several academics.  Its primary purpose is to make UK copyright law more accessible to creators, media professionals and the wider public.

A fundamental challenge was to identify the real questions and concerns of people affected by copyright law. To that extent, the investigators employed a multi-layered methodology, explained in detail at http://copyrightuser.org/methodology/. The producers of the resource captured key themes and turned them into 20 FAQs. In addition, they sought to develop specific guidance for individual creative sectors, targeting in particular musicians, filmmakers, performers, writers, visual artists and developers.

The Copyright User team is now working towards developing a package for students to introduce copyright law into the A levels, in order to increase students’ knowledge and awareness of copyright. Meletti presented a short animation featuring the character of Sherlock Holmes with the idea that the video will complement the educational resource. It would serve as a reference for the development of short case studies and hooks for discussing relevant copyright topics.

Following this presentation, the theme of the panel shifted to human rights in the online environment. Daithi Mac Sithigh of the University of Newcastle distinguished between two phases of the project on human rights online and began by summarising the focus of phase one. During this phase the investigators explored how copyright law accommodates freedom of expression and sought to understand the impact of new business models in relation to copyright and freedom of expression.

The literature review further focussed on the scope of the public interest defence and other individual exceptions where human rights have been part of the discussion.

As part of the second phase of the project, the investigators will seek to engage with relevant stakeholders and share the literature review with them with the aim of testing three propositions: a) that the law in this area is adequate, b) that there is a need for specific speech exceptions, and c) that there should be more emphasis on human rights in the existing statutory framework.

Mac Sithigh also mentioned that the team is planning to develop an impact assessment tool so that future proposals of a legal or policy nature can be tested against human rights standards.

Finally, Edina Harbinja, a PhD student at the University of Strathclyde presented the topic of digital assets after death. Harbinja provided an outline of her research programme which is being undertaken within the framework of a doctoral thesis. The project focusses on the transmission of digital assets upon death and comprises three case studies – on e-mails, social networks and the virtual world. 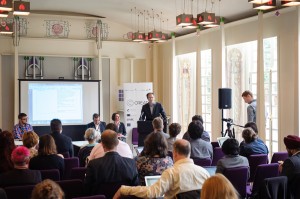 Jim Killock of the Open Rights Group responds, alongside Brian Baglow of the Scottish Games Network and Lawyer Jane Cornwell

After six stimulating and certainly very diverse presentations, respondents summarised some of the issues which each project raises and their wider implications for the respective industries. Brian Baglow from the Scottish Games Network particularly welcomed research on video games explaining that to date there is still an unmet need for more hard data and research on that particular industry, which would be useful for addressing emerging issues on a long term basis. Jim Killock from the Open Rights Group underlined the importance of identifying connections between IP law and the wider palette of other issues which inform business strategies.

The panel closed with a lively Q&A session, which again drew on the various issues presented, from the educational value of online copyright resources, to the lack of human rights debate at the judicial level. Indeed, the panel successfully animated the audience for discussion and delivered substantive food for thought.