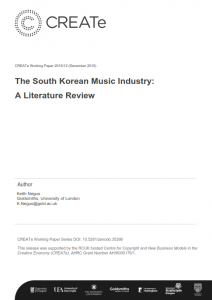 This literature review was initially motivated by issues raised during media and trade press discussion of the South Korean Music Industry and the economic and cultural success of the ‘Korean wave’ and K-Pop phenomena, along with a sense that writing about K-pop was not informed by substantive scholarship on the music industry. In part, it was an attempt to follow up claims that the Korean government had supported its culture industries in using K-pop to generate revenue flows into Korea, along with suggestions that South Korea had developed an approach to music production, and cultural production more generally, that could provide a ‘model’ for other nations, particularly as this issue was being discussed in the Chinese media (see, for example, Nip & Choi, 2012).

The literature review surveys the range of information and debates being addressed in writings published in English on Korean popular music and its industry, identifying and outlining salient issues addressed by existing research. It interrogates this literature in terms of the agenda alluded to above and points to potential avenues for future research. It draws some tentative conclusions about the relevance of this research to debates about creative production, the emerging digital economy and new business models. The aim was to produce a selective, focused and concise literature review, condensing material into key points and issues rather than to engage in extended interrogation, debate and analysis. The term music industry refers to all those businesses and organisations with a commercial interest and stake in the production, circulation and consumption of music. The review concludes with some reflections on significant issues that are not addressed in the current literature, along with possible avenues for future research.