Digitalisation and intermediaries in the music industry 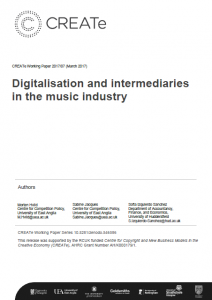 Prior to digitalisation, the vertical structure of the market for recorded music could be described as a large number of artists [composers, lyricists and musicians] supplying creative expressions to a small number of larger record labels and publishers who funded, produced, and marketed the resulting recorded music to subsequently, sell these works to consumers through a fragmented retail sector. We argue that digitalisation has led to a new structure in which the retail segment has also become concentrated. Such a structure, with successive oligopolistic segments, can lead to higher consumer prices through double marginalisation. We further question whether a combination of disintermediation of the record labels function combined with “self-publishing” by artists, will lead to the demise of powerful firms in the record label segment, thus shifting market power from the record label and publisher segment to the retail segment, rather than increasing the number of segments with market power.