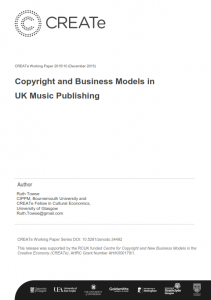 The paper argues that the paradigmatic shift from the sale of printed music to exploiting and managing musical rights that took place in music publishing during the early years of the 20th century was due to the changing market rather than to changes in copyright law. On the one hand, copyright law was ineffectual in controlling piracy throughout the 19th century and on the other hand, performing rights were ignored by music publishers for over 70 years; these points suggest that copyright was not the main reason behind the success of the industry. Rather than leading entrepreneurially (the current view of dynamism in the creative industries), publishers ‘followed the money’ and adapted their business models only when new streams of income from new forms of exploitation through sound recording, broadcasting and film became available as a result of exogenous technical progress. Publishers were locked-in to sales revenue as their business model, though when switching to the new business model of rights management took place, the costs seem not to have been greatly significant.

The paper takes an historical approach to the development of music publishing viewed through the lens of present day issues. The research has resonance for the transition from sales to licensing digital works that is taking place in the creative industries today and puts into perspective the relative significance of market forces and copyright law in the process.

A revised version of this Working Paper has now been published by the Journal of Cultural Economics (11 March 2016) under the title ‘Economics of music publishing: copyright and the market’.