Blockchain or the Chaingang? Challenges, opportunities and hype: the music industry and blockchain technologies 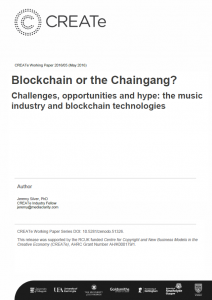 Blockchain is essentially a set of protocols previously known as a “distributed ledger” system. An Economist article published in March 2016, describes it well:

Blockchain is… a database that is maintained not by a single actor, such as a bank, but collaboratively by a number of participants. Their respective computers regularly agree on how to update the database using a “consensus mechanism”, after which the modifications they have settled on are rendered unchangeable with the help of complex cryptography. Once information has been immortalised in this way, it can be used as proof of ownership.

The reason why this has become such a hot topic is that technologists and business people see, in these basic characteristics, immense potential for using blockchain beyond the financial services sector where it was conceived, in many different areas of the economy from energy to health, from transport to music and even as a form of digital democracy in society as a whole.

The key characteristics that are attracting so much attention are the efficiencies to be derived from a network that is distributed and not centralised, combined with the permanence of the record or ledger at its heart that is cryptographically secured. This attracts those that see profound ideological implications in something that is an alternative to systems that are controlled from a single central point.

For the music industry, some of these characterstics might mean that creators could, in theory, radically reduce the cost of unit transactions, thus potentially enabling content licensing for very small sums to be viable. Equally, the transparent record keeping inherent in the system has the potential to lead incrementally to the creation of a Global Repertoire Database (GRD), a kind of holy grail of the digital music industry.

Some other functions that potentially could be performed on blockchain networks could relate to the establishment, validation and tracking of identities, so that individuals could be uniquely identified (e.g., as the performer on a recording). Equally good behaviour in, for example, transactions or in rights distribution speediness could contribute to developing an online reputation, which in turn could effect the sorts of terms that are made available for a particular individual or business.

This paper takes a look at how bitcoin and blockchain captured the public imagination, some of the technology issues at the heart of blockchain and a key dispute that is taking the bitcoin community in different directions and has a bearing on any possible music applications.

The paper explores the initially superficial ways in which blockchain represented an attractive technology and then captures some of the voices that have been generating so much deeper interest in the subject in relation to music.  The paper concludes with an assessment of opportunities and obstacles.

The paper is available on zenodo.org