The Online Copyright Infringement Tracker StudiesThe OFCOM/IPO online copyright infringement (OCI) studies arose as a result of the obligation imposed on OFCOM by the Digital Economy Act 2010 to monitor copyright infringement, and recommendations in the Hargreaves Review (2011) that collection of data should begin before the Digital Economy Act obligations came into force, in order to provide insight on enforcement of intellectual property rights. OFCOM commissioned Kantar Media to develop and carry out the first wave of the study, which ran from May-July 2012. This used a peer- reviewed, robust, hybrid online and face-to-face survey methodology to collect data from 4400 individuals starting in May 2012 in four waves until May 2013. The Intellectual Property Office commissioned three further waves of the study from Kantar in 2015, 2016 and 2017; these allow for comparison of the data from Wave 4.

The original studies can be accessed and downloaded below:

In 2016, CREATe undertook a major data development and enhancement project, which aimed to make the OFCOM/IPO commissioned Online Copyright Infringement (OCI) Tracker studies carried out by Kantar more accessible to those in industry, academia and policy-making.

The result was the OMeBa (Online Media Behavioural Analytics) platform which collates the data from all seven waves of the OCI Tracker studies from 2012-2017 and provides three main functions: –

The OMeBa tool can be accessed here. The tool contains examples and a tutorial to assist users in using all the functions of OMeBa.

The OFCOM/Kantar/IPO OCI Tracker studies started as a means to monitor the growth of illegal file sharing as part of the remit of OFCOM under the Digital Economy Act. The OCI Tracker surveys were developed as a tool to measure the level of infringing activity and attitudes towards illegal file sharing in the UK over time. The studies were developed in a robust manner to address representativeness, honesty of responses, and consumer understanding. The result is a series of studies carried out over three month periods from 2012 – 2017. The first four waves of the surveys looked at consecutive quarters. Waves 5-7 revisited the quarter March – May in 2015, 2016 and 2017 in order to compare this data with that collected in Wave 4 (March-May 2017). 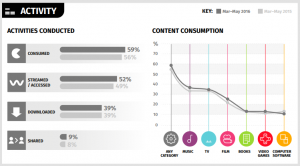 The data collected in the OCI Tracker Surveys is extensive. Initially OFCOM published the Reports with the Master Questionnaires, Datasets, and Slide summaries in addition to the Report prepared for OFCOM by Kantar. Latterly, the IPO has published Waves 5, 6 and 7 as a Report accompanied by Infographics and a CSV file with the dataset. Whilst all the OCI Tracker Surveys provide useful information about the results from that particular survey, they provide limited means to evaluate the results against previous OCI Tracker results. Additionally, with the survey having over 500 questions and collecting 5000+ points of data, it is impossible for the published reports to cover every data point. For organisations and businesses interested in specific detail about one of the types of content covered in the OCI Tracker surveys, engaging with the surveys requires extensive additional statistical work with the published datasets. 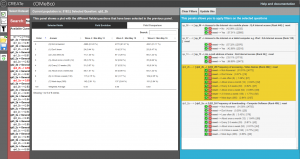 CREATe has created a solution that addresses these issues by bringing together all the datasets in a comprehensive tool called OMeBa (Online Media Behavioural Analytics). Rather than have to use resources to carry out new exploration of the OCI Tracker datasets, academics, industry and those engaged in policy-making can use the OMeBa tool to interpret the OCI Tracker data to explore the data and answer their own questions. As well as giving rightsholders a way to engage with empirical data about illegal file sharing and online media consumption, the OMeBa tool enables new creative businesses to gauge where there is a gap in the market for legal content and for businesses to access information about how their business models can adapt to technological change.