The Adventure of The Missing Note: The Game is On at the Icepops conference

The Adventure of The Missing Note: The Game is On at the Icepops conference

By Bartolomeo Meletti16 April 2018No Comments 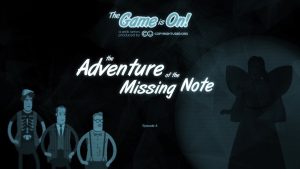 Icepops 2018 – the International Copyright-literacy Event with Playful Opportunities for Practitioners and Scholars – took place on Tuesday 3rd April at the University of Liverpool. The conference was conceived and co-chaired by Chris Morrison and Dr Jane Secker, and co-sponsored by CLA, Learning on Screen, CREATe, IPAN, EBLIDA, UK Copyright Literacy and the CILIP Information Literacy Group. The event brought together practitioners and scholars from all over the world, including the US, Australia, New Zealand, Sweden, Czech Republic, Switzerland and Hungary. The opening keynote by Professor Ronan Deazley (Queen’s University Belfast) – titled When the Copyright Fun Stops, Stop! – highlighted the importance of educating about copyright by doing and documenting, by embedding copyright use in practice. He provided various examples of projects supported by CREATe that adopt this approach, including DAYOR, the Copyright Cortex, Digitising Morgan, and CopyrightUser.org. Ronan’s keynote ended with the launch of the new episode of The Game is On! series – The Adventure of the Missing Note – another innovative example of how copyright can be taught by engaging with the law in practice. 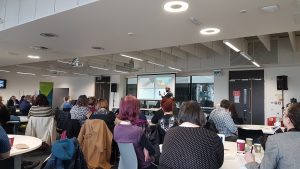 Ronan Deazley introducing The Game is On!

Following the keynote and the presentation of the Publishing Trap by Jane and Chris, I ran a Copyright Education World Café session called Exploring Copyright & Creativity with Sherlock Holmes. During the session I used one of the Case Files accompanying The Missing Note – The Creative Copy – to prompt a discussion around music copyright and exceptions.

In The Adventure of the Missing Note, a digital file contains a recording of the soundtrack to the film The Forger’s Apprentice, but with one note missing. The missing note is the key to a cipher that holds the answer to the whereabouts of the anarchist group.

The soundtrack to The Forger’s Apprentice – the fictional film that provides the backdrop to episode 3 of The Game is On! – is based on the Love Theme from The Godfather, composed by Nino Rota and now probably one of the most famous film soundtracks ever produced. We chose to adapt Rota’s ‘Love theme’ for a very specific reason. Rota was nominated for an Oscar for Best Original Dramatic Score for his work on Ford Coppola’s 1972 film. However, the nomination was subsequently withdrawn by the Academy on the grounds that Rota – when writing the Love Theme for the film – had reused music from a score that he had written for the 1958 Italian film comedy Fortunella. In other words, he had plagiarised his own earlier work. The Academy argued that as Rota had reused his own music from an earlier film, the score to The Godfather could not be considered ‘original’. We thought that this was an interesting story to address the topic of self-plagiarism, a creative technique that we often adopt in producing The Game is On! and which presents some interesting copyright aspects. For example, Section 64 of the Copyright, Designs and Patents Act states that where the author of an artistic work is not the copyright owner of that work, she does not infringe the copyright by copying the work in making another artistic work, provided she does not repeat or imitate the main design of the earlier work. Curiously, the CDPA specifically provides this exception only for artists, but not for authors of literary works or music composers.

The other interesting aspect of our adaptation of Rota’s composition – which stimulated a discussion among the participants – is that we did not ask for permission to produce it as we believe that our use is covered by one or more copyright exceptions. Below you can find the scores of the two melodies: the Love Theme by Rota and its adaptation by Bartolotti, Cirillo and Terni.

The notes are the same, but the timing, phrasing and effect is different. Most participants agreed that our use was lawful, some arguing that it was covered by quotation or parody, others saying that illustration for instruction would apply in this case. What do you think? Have we infringed copyright in the original melody or does our reuse falls within one of the exceptions to copyright? You can download Case File #30 The Creative Copy here.

In any case, our approach of engaging with the law and in particular copyright exceptions in creative practice has proved successful in prompting a fruitful discussion on these challenging topics.

After the World Café session, the Icepops conference continued with various engaging and playful activities, including a series of Lighting Talks, a Mindfulness session led by Dr Hayleigh Bosher, a keynote by Alex Moseley (Educational Designer, University of Leicester) titled Looking for play in dark places, a games hackathon and a closing panel game show with Kyle Courtney (Copyright Advisor for Harvard University).

One of the common themes that emerged from talks and presentations by copyright officers, librarians, learning technologists and other specialists involved in educating colleagues about copyright, is that copyright tends to raise negative feelings in teachers and scholars. Feelings of frustration, confusion, intimidation, and even anger. CopyrightUser.org was mentioned many times as an example of excellence in this respect: features such as the focus on positive messaging, our bottom-up approach and responsiveness, and the innovative multimedia resources that engage with copyright use are of inspiration for many educational initiatives across the UK and internationally.