By Amy Thomas21 November 2019No Comments 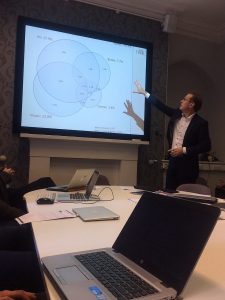 Joost’s study (together with João Pedro Quintais) provides a comprehensive overview of the state of online piracy, including piracy rates, motivations and its impact on consumption from legal sources. It also considers the effectiveness of enforcement measures through comparative legal research across 13 countries and includes a consumer survey with over 35 thousand respondents (incl. over 7,000 minors). Many of the findings are supported and confirmed by the studies on the Copyright Evidence Wiki (see in particular the 395 studies catalogued on “Enforcement” issues).

Overall, Joost finds that piracy, whilst remaining widespread, has been in decline since 2014. However, this decline is not attributed to the presence of strong enforcement measures, of which Joost notes there is “embarrassingly little” evidence of their effectiveness. Instead, there is a strong correlation between piracy and lack of purchasing power; higher rates of legal consumption are correlated with higher per capita income countries, with the opposite being true of lower per capita income countries. As such, declines in piracy may be attributed to market phenomena such as the “Spotify effect”, which has created more affordable and accessible means of consuming content.

On the subject of sales displacement, Joost cautions that it is “tricky” to determine the effect of piracy on sales, which is shrouded in uncertainty. Changing and nuanced markets mean the significance of sales displacement varies per sector (depending on whether this is music, film, videos, books or games) and even by method of consumption (e.g. streaming vs. downloading). Furthermore, the study finds that more than 95% of pirates are “omnivorous”, consuming from both legal and illegal sources – judged by their median consumption from legal sources, they are in fact the “industry’s largest customers. As such, and as substantiated by earlier studies (see e.g. Van der Ende et al. (2014)) Joost finds that lost sales are mitigated by complimentary, positive effects from increasing alternative sources of revenue such as e.g. live music and cinema.

We would like to thank Joost for his insightful presentation and many helpful recommendations on how the Wiki could be improved for researchers, policy makers and journalists.

Slides from the event are available below: