Very many thanks to all those who participated and attended our conference on 26th September. This one day symposium took place in the company of leading writers, technologists, publishers and agents to ask whether the existing framework of publishing copyright can be adequately adapted to meet – and balance – the rights, needs and creative ambition of authors and publishers. In collaboration with Goldsmiths, University of London, Whose Book is it anyway? IP, collaborative business models, and questions of ethics and creativity in digital publishing (2012-2016) and CREATe, the RCUK Centre for Copyright and New Business Models in the Creative Economy.

The beautiful venue, The Lydia and Manfred Gorvy Lecture Theatre at the Victoria and Albert Museum, was an auspicious setting for the academics, artists, and industry specialists to discuss the importance and relevance of IP and copyright, going forward in the digital age. Danuta Kean, editor of Mslexia and publishing expert, began proceedings with a keynote which addressed the need for increased diversity within the publishing industry.  Danuta was followed by Michael Bhaskar, author of The Content Machine (2013) and co-founder and director of Canelo Digital Publishing, who spoke on changes to the industry and stressed the increased necessity of curation in publishing. The two keynotes were followed by three panels throughout the day – What Are Words Worth Now?, How Do Writers Eat?, and A View From Elsewhere. 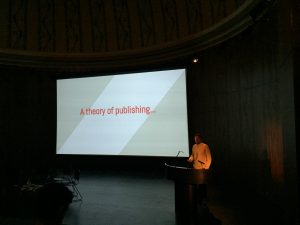 As part of the What Are Words Worth Now? panel, we heard from Sophie Rochester, founder of The Literary Platform and Fiction Uncovered (now The Jerwood Prize), who discussed impact on writer’s fees and salaries and how careers in writing have been affected by changes to the publishing industry. Then Louise O’Hare, from Three Letter Words, spoke on her experiences setting up the bi-lingual, transnational magazine ‘Sonrisa/Smile’ – a dialogue between artists and writers in London and Havana. Jack Underwood, poet and lecturer in English and Creative Writing at Goldsmiths, completed this panel with the story of his work on the ‘free translation’ of poems by German writer Mascha Kaléko, into his own series of ‘ghost poems.’ 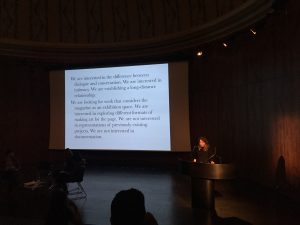 A wonderful lunch was followed by suitably titled second panel How Do Writers Eat? Casey Brienza, Lecturer in Publishing and Digital Media at City University, began with a talk on new publishing models for Manga in the US. Ruth Jamieson, author of Print is Dead, Long Live Print (2015) followed, taking us through the field of independent print journalism which is experiencing a second golden age, despite fears the internet would kill print magazines. The panel was concluded by CREATe’s Director and Professor of Intellectual Property Law at the University of Glasgow, Martin Kretschmer. Martin spoke on the effects of digitalisation on writers’ earnings, and included substantial analysis and interpretation of data. 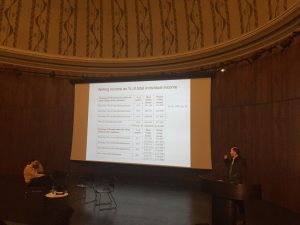 The final panel – A View From Elsewhere – began with J. R. Carpenter, a writer and artist working in print and digital art and literature. J. R. addressed the ‘necessity of plagiarism’ and the collective inheritance of works of art; Eva Weinmayr, PhD student and co-founder of AND Publishing followed, asking questions of why we publish, and for whom as part of a wider discussion on the restrictions of copyright and the impact this has on complex social and cultural relationships. The last panellist was Smita Kheria, Lecturer in Intellectual Property Law at the University of Edinburgh. Smita presented material from her ongoing research project ‘Individual Creators,’ which looks at the interaction between copyright and the everyday life of creative practitioners. 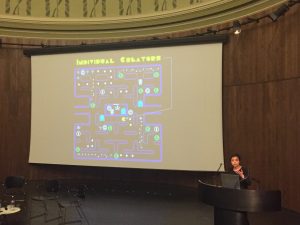 The day’s programme was concluded with closing remarks from Sam Edenborough, director of ILA Ltd – a London-based literary agency – and current President of the Association of Authors’ Agents, a trade body representing the interests of UK literary agencies. Sam commented on both the importance of a robust IP model and the moral right of authorship, alongside the significant communal nature of book culture.

Final thanks were made by Professors Janis Jefferies and Sarah Kember, on behalf of the team. Special thanks to Ozden Sahin, the conference organiser.

The entire conference is available as an audio recording below.