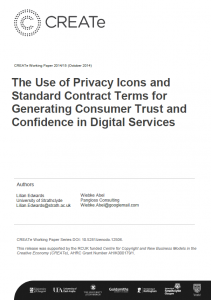 In the wake of the Snowden revelations about covert state access to consumer data stored in the cloud, consumer confidence about the handling of their personal data in the Cloud in particular, and in digital services in general, has suffered a severe blow.  This is particularly true in Europe, where in general consumers expect a higher standard of privacy protection than in the US, both by law and as a matter of cultural norms.

Accordingly this report was commissioned to examine two possible paths for UK industry to re-establish consumer trust and confidence in the cloud, and in consumer digital services in general.

First, we consider the use of icons and labelling as a means to more effectively communicate complex and lengthy privacy policies to consumers.

Secondly, we assess the use of standardised contract terms or templates in relevant business-to-consumer (B2C) markets, and ask if these might be helpful in relation to industries which collect and use personal data.

In the first section, this report surveys existing examples where iconography and labels have been used to support consumers to make informed decisions about complex factual or legal matters. In particular, we survey prominent use-cases  where information about personal data collection and use has been made more accessible to consumers by representing privacy policies  via icons and labels.

The key findings and recommendations from this part of the analysis are:

The second section of this report surveys proposals for standard contract templates or “regulated privacy policies”.

The key findings are: