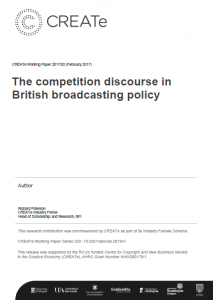 Successive UK governments since the mid-1980s have sought to create a more competitive framework between firms in broadcasting through interventions which constrain the market power of dominant players. In this working paper the gradual encroachment of the competition discourse is described as it undermined the longstanding social democratic model for broadcasting regulation while ignoring lessons from the USA about the consequences of the changes being wrought. The effect of the influence of this discourse on the regulatory framework, and the evolution of the business models of production companies, is traced as, over time, increasing consolidation between production companies and foreign ownership of the production sector occurred.