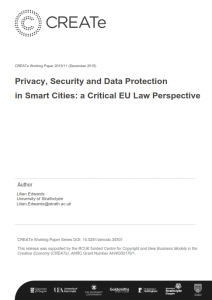 “Smart cities” are a buzzword of the moment. Although legal interest is growing, most academic responses at least in the EU, are still from the technological, urban studies, environmental and sociological rather than legal, sectors[1] and  have primarily laid emphasis on the social, urban, policing and environmental benefits of smart cities, rather than their challenges, in often a rather uncritical fashion[2] . However a growing backlash from the privacy and surveillance sectors warns of the potential threat to personal privacy posed by smart cities[3]. A key issue is the lack of opportunity in an ambient or smart city environment for the giving of meaningful consent to processing of personal data; other crucial issues include the degree to which smart cities collect private data from inevitable public interactions,  the “privatisation” of  ownership of both infrastructure and data,  the repurposing of “big data” drawn from IoT in smart cities and the storage of that data in the Cloud.

This paper, drawing on author engagement with smart city development in Glasgow as well as the results of an international conference in the area curated by the author, argues that smart cities combine the three greatest current threats to personal privacy, with which regulation has so far failed to deal effectively; the Internet of Things(IoT)  or “ubiquitous computing”;  “Big Data” ; and the Cloud. While these three phenomena have been examined extensively in much privacy literature (particularly the last two), both in the US and EU, the combination is under-explored. Furthermore, US legal literature and solutions (if any) are not simply transferable to the EU because of the US’s lack of an omnibus data protection (DP) law.  I will discuss how and if EU DP law controls possible threats to personal privacy from smart cities and suggest further research on two possible solutions: one, a mandatory holistic privacy impact assessment (PIA) exercise for smart cities: two, code solutions for flagging the need for, and consequences of, giving consent to collection of data in ambient environments.