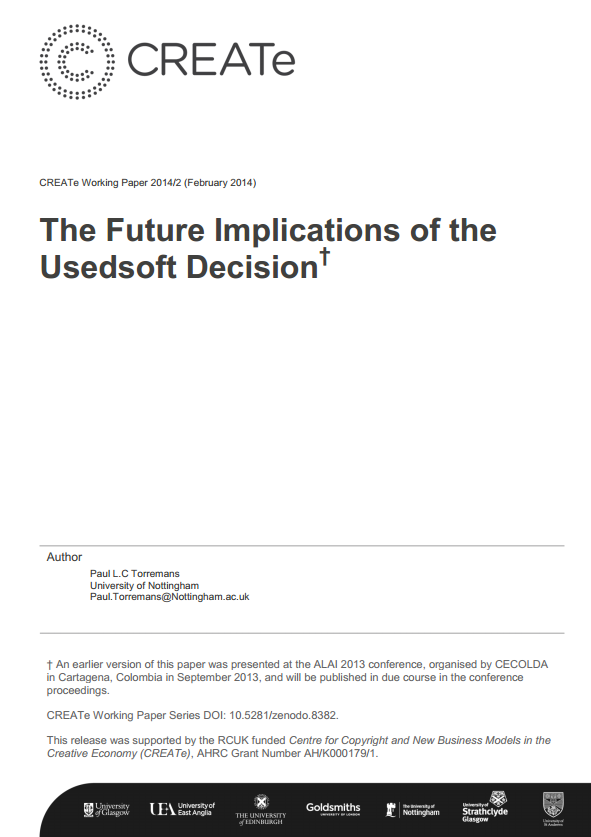 Those were the days! Up to a decade ago exhaustion in copyright was strictly limited to the distribution of (multiple) hard copies of copyright works. Anything else was considered to be outside the exhaustion rules. E.g. multiple showings of a movie in movie theatres was seen as the essence of movie copyright and exhaustion had therefore no role to play in that area according to the Coditel decision. [1] How wrong were we though when we assumed that the digital revolution that turned so many things upside down in copyright would have no impact in this area.

Admittedly, the decoder cases [2] were potentially only about hard copies. Hard copies in the sense of cards for decoders for satellite broadcasts of football matches could easily be subjected to the exhaustion rules that enforce the free movement of goods provisions of the EU Treaty. But if the decoder cards that had been obtained in Greece could be used in the UK, such use gave access to the broadcasts. The real impetus to accept this and to breach the uncontested logic of the Coditel approach may have been in competition law in the decoder cases, but they show clearly that the logic of copyright is not the dominant factor in the digital era. [3] That dominance is on the basis of the EU Treaty given to the rules on free movement and on competition law.

Usedsoft [4] clearly fits in with that evolution. The Usedsoft v Oracle case [5] was all about computer software wich Oracle develops and markets. Oracle is the proprietor of the exclusive user rights under copyright law in those programs. It distributes the software at issue in 85% of cases by downloading from the internet. The customer downloads a copy of the software directly to his computer from Oracle’s website. The user right for such a program, which is granted by a licence agreement, includes the right to store a copy of the program permanently on a server and to allow a certain number of users to access it by downloading it to the main memory of their work-station computers. UsedSoft markets used software licences, including user licences for Oracle computer programs. For that purpose UsedSoft acquires from customers of Oracle such user licences, or parts of them, where the original licences relate to a greater number of users than required by the first acquirer. Usedsoft’s practices involve the making of a copy of the computer program, which raises the question of the infringement of the right of reproduction. A further question that arises is whether the right to distribute a copy of the computer program is exhausted. A positive answer to the question may help to justify Usedsoft’s business model.

And effectively, in the CJEU’s judgment one see the application of exhaustion rules, despite the absence of a sale of hard copies. But the special rules that are contained in the software Directive are, for fairly obvious reasons, rather omnipresent in the decision. Could it therefore be that Usedsoft is entirely software specific [6] and that even in that context a small change to existing business practices can overcome the impact of the decision? Or is this only a first example of the exhaustion logic to come and will the Court of Justice of the European Union apply the same logic to other copyright works? On-line distribution of music and licences granting access to on-line databases are then obvious candidates that attract attention. In essence I am asked whether I have a crystal ball and whether I can gaze in it. The straightforward answer is that I do not have a crystal ball. But let me nevertheless try to identify some guiding principles.