EU copyright reform: the case for a related right for press publishers 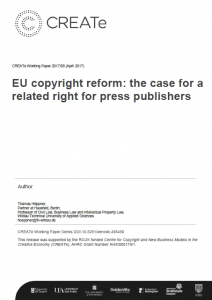 On September 14th 2016, the European Commission presented a package of proposed copyright reforms under the banner of promoting a Digital Single Market (DSM). Amongst others, the proposal includes an exclusive right of press publishers for the digital publication of their press publications. The proposal has been criticised by academics arguing that the right lacked a justification and would interfere with the access to information. Picking up on this lecture against a publishers’ right, Professor Höppner investigated the merits of such a right. To this end, the lecture attempted to outline the economic and technical background including the developments in the consumption of press publications since the current legislation came into force. The lecture then presented arguments in favour of the proposed right and examined the counter-arguments raised against it.

Download EU copyright reform: the case for a related right for press publishers

This Working Paper is a lightly edited transcript of the lecture provided by Professor Thomas Höppner on 14 February 2017 at the University of Glasgow as part of the CREATe Public Lecture Series 2017. A video of the lecture and Thomas’ slides are available from the event resource page.