Copyright and the Economic Effects of Parody: An empirical study of music videos on the YouTube platform, and an assessment of regulatory options 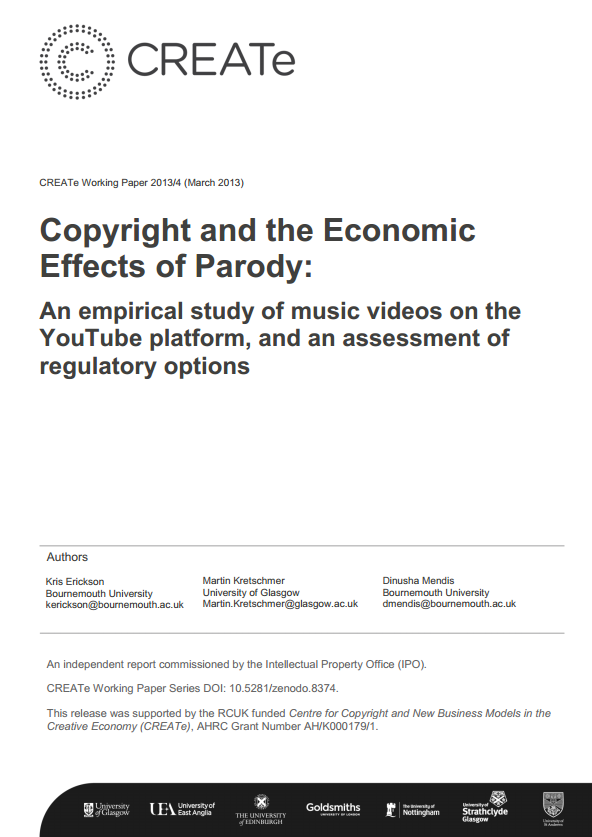 Abstract
This is the third in a sequence of three reports on Parody & Pastiche, commissioned to evaluate policy options in the implementation of the Hargreaves Review of Intellectual Property & Growth (2011). Study I presents new empirical data about music video parodies on the online platform YouTube; Study II offers a comparative legal review of the law of parody in seven jurisdictions; Study III provides a summary of the findings of Studies I & II, and analyses their relevance for copyright policy.

Study III is structured as follows:
First, we discuss the empirical findings from Study I. A sample of 8,299 user-generated music video parodies was constructed relating to the top-100 charting music singles in the UK for the year 2011. The key findings are:

Secondly, we present a distilled discussion of the legal treatment of parodies in seven jurisdictions that have implemented a copyright exception for parody (Australia, Canada, France, Germany, Netherlands, UK, and USA). The underlying principles (including economic and constitutional) governing divergent legal approaches are identified, and a list of policy options is presented.