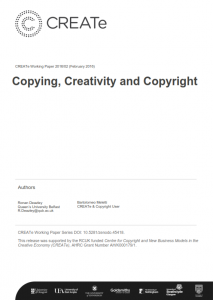 This Working Paper by Professor Ronan Deazley (Queen’s University Belfast) and CREATe researcher Bartolomeo Meletti – offers insights into the creative process behind their award-winning film The Adventure of the Girl with the Light Blue Hair, and makes the case for understanding copying as a positive phenomenon in helping us learn and innovate, develop and engage with others. Copying plays a crucial role at all stages of our development as human beings, from DNA replication to the way in which physical synchronicity helps us establish connections and relationships with friends and family, and beyond. Copying can also facilitate freedom of expression and political engagement, by enabling people and communities across the globe come together and speak with one voice. Consider, for example the global response to the killings in Paris at the offices of the Charlie Hebdo magazine on 7 January 2015. Three simple words – Je Suis Charlie – have been copied (creatively and otherwise) and re-copied millions of times all over the world to commemorate those who lost their lives during that attack. This is copying as remembrance, free speech, solidarity and protest.