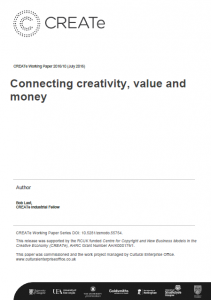 In 1901, GK Chesterton, in a defence of “penny dreadfuls”, the commercial writing of the time, criticised a tendency to underestimate “humanity minus ourselves”. This remains a useful blandishment in the 21st century; debate and struggle around culture and creativity are dogged by a sense that the ‘other’ is talking about something different entirely. This paper is written with policy-making in mind but also hopes to speak to those on whom policy acts and impacts. It may at times recap thoughts that are, from one perspective or the other, blindingly obvious. When it does, it does so in the immodest hope of facilitating wider understandings. Chesterton’s defence of the “penny dreadfuls” more than a century ago reminds us that debate around what is currently commonly termed “the creative industries” is not new.

Humpty Dumpty in Lewis Carroll’s Through The Looking Glass famously asserted in a scornful tone: “When I use a word it means just what I choose it to mean – nothing more nor less.” For policy, which lives as language before it can become action, this is a tempting but dangerous approach. Furthermore, where creativity, imagination and cultural content are concerned, clarity becomes even more challenging as it is necessary to engage with ideas; with intangibles that resist rigorous and unambiguous mapping to any measure.

Connecting Creativity, Value and Money sets out to take a snapshot, in particular, of micro-businesses in the creative industries, specifically looking at Scotland. Actor is used in this paper in a sense akin to its (asexual) use in systems reasoning. It is used to identify a component in the creative and cultural ecosystem; as a portmanteau term for those hewing and welding installations and performances, wrangling words, those whose palette is drawn from ones and zeros and pixels, those tunnellers through the cultural substrate, the sign-posters at the top of the populist mountain, the craftsmen and craftswomen, the mendicants and the entrepreneurs whose collective foment makes up the cultural economy and the creative industries that fall within it. Numerical evidence around the scale and shape of the sector has been examined but the emphasis of this paper’s new research has been on the voice of practitioners and entrepreneurs themselves; the actors within the ecosystem, seeking wider applicable insights.

In 1967 Roland Barthes asked: “Why does fashion utter clothing so abundantly? Why does it interpose, between the object and its user, such a luxury of words (not to mention images), such a network of meaning?” It turns out that the complexity of language around what we currently consider the creative industries has a long history. In the 17th century one John Evelyn controversially asserted the idea that the architect verborum, skilled in the use of words and whose job was to interpret architecture, was a crucial and intrinsic part of the architectural process. It is worth recognising that the disproportionate noise around policy and the creative industries, the constant public negotiations of success or failure in the media, the blogosphere and academia, should not be stigmatised as a strictly contemporary challenge.

The complexity and constant presence of unsettled debate is itself evidence of the intangible values embedded within private and public constructions of much of what is considered to constitute the creative industries, and the importance our society attaches to them.

The presence of intangible values across a range of businesses from large publishing houses to start-up knitting businesses emerges strongly from the interviews conducted for this paper. For those with the ambition to assist these industries effectively, immersion in a matrix of intangibles is inescapable, although perhaps like a baptism, it can be confined to a one-off dip so as not to inhibit action.

This paper was commissioned and the work project managed by Cultural Enterprise Office.