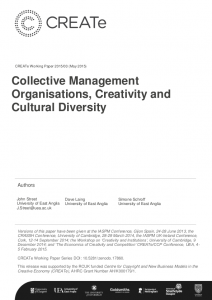 ‘Somewhere right now, in this country, a young person is scribbling on a scrap of paper or tapping on a keyboard, composing a song that will resonate far beyond the page. The industry may change, but that simple act of creativity remains, and will always remain, immortal and timeless’ (Feargal Sharkey, Chief Executive, UK Music, 2010)

The quotation above from Feargal Sharkey, former lead singer of the Undertones, appears in the Foreword to UK Music’s Liberating Creativity policy statement. The document captures a familiar dilemma. On the one hand, Sharkey-the-romantic holds dear to the belief that there is something magical or mystical about the act of creativity, a moment in which an individual, or small group of individuals, are inspired to create. On the other hand, there is Sharkey-the-lobbyist arguing for the need for government intervention and investment for the purpose of ‘liberating creativity’. Sharkey is by no means alone in wanting to combine these two thoughts. But can they be? What contribution does public policy intervention make to creativity? Does it liberate it, or stifle it?

This is a familiar question, to which there are many answers. We discuss some of these below, but our main concern is with the contribution to creativity of a particular institution – the Collective Management Organisation (CMO)1, and the public policy designed to regulate its performance. We also concentrate on a single sector of the creative industries: the music industry. In doing this, we examine the European Union’s attempt to reform the CMO in the name of creativity (among other goals), and we compare the performance of CMOs in different national settings. Our argument is that, by these two routes, we can contribute to an understanding of the part played by public policy and institutional intermediaries in fostering creativity.

This narrowing of the focus is necessary for any reasonable answer to the question as to what a particular policy regime and its component intermediaries contribute to creative culture. Key to the operation of such a regime is the management of copyright, and our analysis is concerned with how intermediaries themselves understand and justify their contribution – for example, it is notable how the word ‘creativity’ is often parsed as ‘cultural diversity’, a rather different, if equally important, goal.

In what follows we begin by justifying our emphasis upon the CMO, a justification that is couched both in terms of the neglect to which CMOs have been subject and the importance that they are assuming in a digital economy (Towse, 2013). This importance is recognized by the EU in its recent Directive on CMO reform (2014/26/EU), and by the recommendations of inquiries – like that by Ian Hargreaves (2011) – for greater transparency, among other things, in CMO practice. We also consider other attempts to reveal the role played by institutions and institutional structures in facilitating creativity, and the problems entailed in measuring the key terms and identifying the key causal mechanisms.