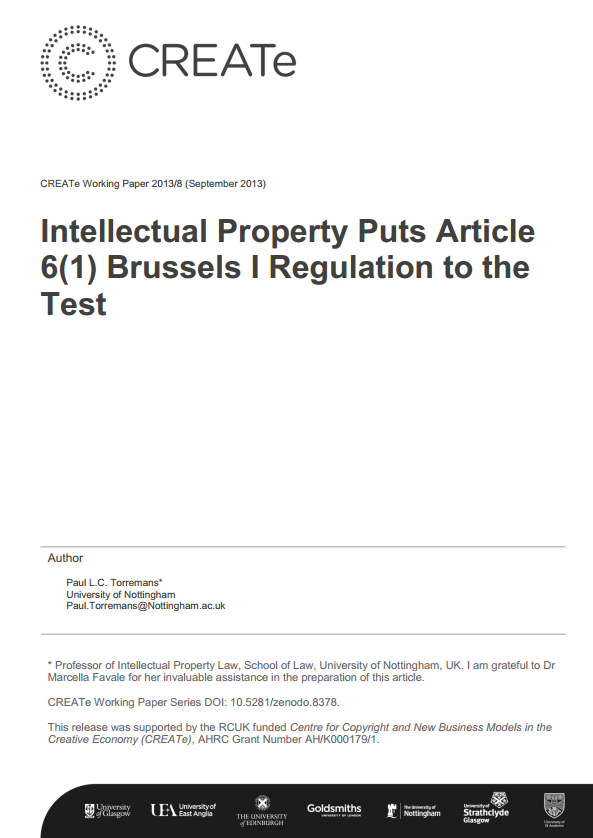 The contrast between national intellectual property rights, which are still granted on the basis of the territoriality principle, and which, as a consequence, logically produce on the one hand parallel rights in several countries and on the other hand the international exploitation of such rights, results in a scenario where similar violations, mostly performed by defendants with a mutual relationship between them, give rise to claims based on similar national provisions on intellectual property. Article 2 of Brussels I Regulation allows for the separate prosecution of every defendant in the country where he or she resides. Although Article 5(3) provides for an alternative solution, the standard scenario involves a multitude of claims submitted country by country, apparently as a logical consequence of the territoriality principle.[1]

Intellectual Property has been the object of considerable harmonization over the years, on the basis of both international treaties and European Union law. Without going too much into details, it is obvious that the combination of territorial (national) intellectual property rights and their exploitation beyond national boundaries raises questions related with the possible application of Article 6(1) of the Brussels I Regulation. A forum connexitatis offers in fact the possibility to pursue the infringement of what, from a commercial point of view, is often considered as a single right, rather than a bundle of parallel national intellectual property rights. Thus, the patent infringement performed in a uniform manner, for example by the commercialization of a copy of the patented product by related defendants, is pursued as an single case before a single court. Article 6(1) offers therefore an interesting opportunity in a number of intellectual property cases. However, Article 6(1) is principally targeted at defendants residing in different Member States acting with a common agenda,[2] and this is in contrast with the most common scenario of intellectual property rights infringement, which involves both parallel rights and defendants that act (individually) in a parallel fashion, whether or not they act within a group of companies.

Hopes that the recent reform of the Brussels I Regulation would bring clarification on this point, since the existing jurisprudence of the European Court of Justice was not generally supported by intellectual property doctrine and practitioners, have unfortunately not been fulfilled. Except for the fact that the concerned defendant is now expressly defined, nothing changes in the existing text of the Article 6(1) which now becomes Article 8(1).[3] Legal practice must therefore continue to work with the following text of the new Article 8 (the new fragment is within parenthesis):

‘[A person domiciled in a Member State] may also be sued:
1. where he is one of a number of defendants, in the courts for the place where any one of them is domiciled, provided the claims are so closely connected that it is expedient to hear and determine them together to avoid the risk of irreconcilable judgments resulting from separate proceedings;
2.[…]’

Debating the causes of this status quo is not very useful for the legal practice. Whether it is an absence of consensus on a modified text or a confirmation of the Court’s interpretation of Article 6(1) is of limited interest. Legal practice must in fact continue working with the existing jurisprudence of the Court.[4] This contribution attempts therefore to clarify the Court’s current position.