By Andrew McHugh21 March 2016No Comments 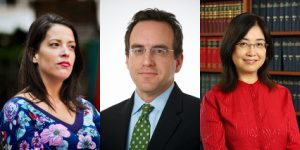 is delighted to announce an exciting series of Intellectual Property lectures for Spring/Summer 2016. In April, we welcome Dr Rosana Pinheiro-Machado, an anthropologist from the University of Oxford, who will speak about her ethnographic field-work, reflecting on the impact of the criminalisation of copyright infringement on street-traders in Brazil. Then, in May, Dr Yahong Li, of the University of Hong Kong, will present her research commissioned by the Hong Kong Government about user generated content and fair use, situating it within broader social and cultural changes and the relation between Hong Kong and Mainland China. Finally, in July, Prof. Barton Beebe of New York University, will reflect on the complex position of ‘aesthetic progress’ in the IP clause of the US Constitution. For further details of each of these talks, please see below. Any questions about these events should be addressed to Dr. Elena Cooper, CREATe, Glasgow (elena.cooper@glasgow.ac.uk).

Bleistein, American Copyright Law, and the Problem of Aesthetic Progress

From the very origins of American copyright law in the Intellectual Property Clause, whose preamble “To Promote the Progress of Science and useful Arts” excludes any reference to the “fine arts,” our copyright law has struggled to reconcile its fundamental purpose, the promotion of progress, with the aesthetic.  In the 1903 case of Bleistein v. Donaldson Lithographic Co., the Supreme Court was forced to attempt such a reconciliation and to explain how progress in the aesthetic, rather than in the scientific or technological, might be assessed. In an opinion that for all of our attention to it still remains underappreciated and fundamentally misinterpreted by courts and commentators alike, the new Justice Oliver Wendell Holmes, Jr. established that “personality” was the basis of copyright protection, but that the purpose of copyright protection, even of aesthetic works, was progress in the form of “commercial value.” This Article argues that Justice Holmes’s market-value theory of aesthetic progress and the cavalier, peremptory manner in which he formulated it had a profoundly damaging influence on American copyright law and on our pursuit through it of aesthetic progress. After Bleistein, the law coalesced around the “commercial value” of authorial works, creative products, aesthetic objects—and away from the “personality” of authorial work, creative practice, aesthetic subjects. Focusing on aesthetic ends rather than aesthetic means, the law adopted for the aesthetic, as it had for the scientific and technological, an “accumulationist” model of progress, one which defined aesthetic progress as simply the accumulation over time of more and more aesthetic works. Since Bleistein’s fateful commitment to accumulation, it has not been the “Romantic author” but rather the fetishized intellectual commodity that has been the cynosure of the law and driven the law’s expansion.

Urging a rejection of Bleistein’s approach as obsolete in a new culture of massively-distributed authorship, this Article proposes that our copyright law embrace and implement an alternative vision of aesthetic progress based in part on American pragmatist aesthetics. Pragmatist aesthetics recognizes that aesthetic labor has value—as a source of pleasure, of aesthetic and moral cultivation, of imaginative freedom, self-actualization, and solidarity—even when it does not ultimately result in the production of an aesthetic work. The pragmatist vision of aesthetic progress pursues not more accumulation, but more personal engagement and popular participation in the aesthetic practices of our increasingly “poeticized culture.” It urges various reforms of our copyright law.

Barton Beebe is the John M. Desmarais Professor of Intellectual Property Law at New York University School of Law.  He has been the Anne Urowsky Visiting Professor of Law at Yale Law School and a Visiting Professor of Law at Stanford Law School.  He has also taught courses at the Centre d’Études Internationales de la Propriété Intellectuelle at the Université de Strasbourg, the Munich Intellectual Property Law Center, the State Intellectual Property Office of the People’s Republic of China, the Hanken School of Economics in Helsinki, Finland, and Hebrew University in Israel.  In 2007, Professor Beebe was a Special Master in the case of Louis Vuitton Malletier v. Dooney & Bourke, Inc., No. 04 Civ. 2990 (SAS) (S.D.N.Y.).  His published works include Intellectual Property Law and the Sumptuary Code, 123 Harvard Law Review 809 (2010), and An Empirical Study of U.S. Copyright Fair Use Opinions, 1978-2005, 156 Pennsylvania Law Review 549 (2008).  He is also the author of the free online casebook Trademark Law: An Open-Source Casebook.  Professor Beebe clerked for Judge Denise Cote of the United States District Court for the Southern District of New York. 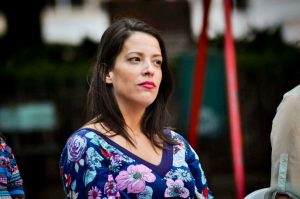 How Trinkets Became Piracy: Intellectual Property Discourse and its Impacts on Informal Economy in Brazil

The global enforcement against piracy has become a major narrative in the 21st century, impacting and criminalizing the informal street markets in Brazil. Drawing upon a longitudinal anthropological research, this talk will present the everyday dynamics of a street market (in the city of Porto Alegre, Brazil) and its connections with the Paraguayan border, from where the traders used to import/smuggle their goods. In addition, it examines the impacts of the formalisation of the traders’ activities, which is a result of a policy that fights against informal economy and piracy.

Rosana Pinheiro-Machado is a social scientist and an anthropologist. She is a Departamental Lecturer in the Department of International Development at University of Oxford. As a Wenner Gren grantee,she received her PhD from the Federal University of Rio Grande do Sul (UFRGS/Brazil). Prior to joining Oxford, she has held visiting positions at Harvard University and UCL. Her PhD thesis – based on a longitudinal research across three countries (China, Paraguay, and Brazil) over 15 years – was awarded several prizes, including Best PhD Thesis in Brazil, by the Ministry of Education. Her book Made in China published in Brazil (Hucitec, 2011) is currently being translated into English.

Aiming at bringing Hong Kong’s copyright protection in line with the international trend, particularly with regard to copyright protection over Internet, Hong Kong government started copyright law amendment in 2006. 10 years have passed but the law is still unchanged. The Copyright (Amendment) Bill has been repeatedly dropped by Hong Kong Legislative Council (LegCo) due to pan-democratic lawmakers’ filibusters. Outside the LegCo, Hong Kong netizens used violence to protest the Bill.  The legal issues such as whether the user-generated-content (UGC) should be treated as a fair use, and whether online copyright infringement should be criminalized have been escalated to a political issue of freedom of speech and press. Why has the law reform encountered the unprecedented opposition from the public in Hong Kong (and the political party representing them)? What is the cultural, social and political backdrop that has influenced the amendment process? This talk will answer these questions by looking at not only the legal issues being debated, the respective positions taken by the Hong Kong government and the public, but also the complicated relationship between Hong Kong and the Mainland China, and the cultural and social changes caused by this relationship during the past 10 years.  The talk will also shed some light on how Hong Kong government should move forward with respect to its copyright law reform, and why its copyright law reform should not only follow the international trend but also be watchful of the copyright law reform in the mainland China, particularly on UGC and fair use.

Dr Yahong Li, JSD and JSM (Stanford), is an Associate Professor at the Department of Law of the University of Hong Kong (HKU). She specializes in IP law with a focus on cross-disciplinary study of IP, culture and technological innovation.  She is an author of “China” chapter of International Copyright and Practice (edited by Lionel Bently) (LexisNexis, 2015), Imitation to Innovation in China: the Role of Patents in Biotech and Pharmaceutical Industries (Edward Elgar, 2010), International and Comparative Intellectual Property: Law, Policy and Practice (LexisNexis, 2005), as well as numerous peer-reviewed journal articles. Her current research focuses on copyright and creativity, copyright law reform, and IP boundary. In particular, she has been working on the projects of prosumerism, user-generated contents, public domain, digital culture and fair use, in collaboration with Vienna University of Economics and Business, University of New South Walse, etc. At HKU, she teaches Master’s courses of IP, Innovation and Development, Copyright and Creativity, and International and Comparative IP Law. Dr. Li is a frequent speaker at international and regional conferences, and visiting fellow/Professor, inter alia, at Harvard Law School, Cambridge University, Max Planck Institute for Innovation and Competition, Melbourne University Faculty of Law, Santa Clara University Law School, and Singapore Management University.