On 12th November 2015, the animated film The Adventure of the Girl with the Light Blue Hair by Professor Ronan Deazley and CREATe researcher Bartolomeo Meletti won the AHRC Award for Innovation in Film.

The award ceremony took place at the British Film Institute Southbank in London, the leading repertory cinema in the UK. The AHRC Research in Film Awards – designed to recognise the creative and innovative work being undertaken at the interface between research and film – attracted hundreds of entries including, animations, installations and gallery pieces, music videos, and documentaries. All the winners and full versions of the films can be seen here. 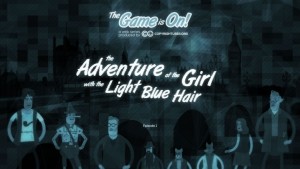 Professor Deazley commented: “We’re delighted to have won this prestigious award, and particularly because our category is concerned with the use of innovative techniques and approaches to making research more accessible and engaging to communities beyond academia. We set out to make a film that would help explain fundamental concepts of copyright in a way that is thought-provoking but also entertaining. It is a privilege to receive an award for work that celebrates the possibilities of lawful, creative copying.”

Bartolomeo Meletti said: “Copyright is incredibly important for authors, artists, musicians and filmmakers, but creativity also often involves copying and appropriation. With this film we wanted to educate about copyright but also to highlight the crucial role that lawful copying plays in the way in which we all create and present ourselves, artistically and otherwise, to the world.”

The Adventure of the Girl with the Light Blue Hair is the first episode of The Game is On!, a series of short animated films that puts copyright under the magnifying glass of Sherlock Holmes, illustrating concepts of remix, reuse and the public domain for school-aged learners and other creative users of copyright. The film is accompanied by 12 Case Files, supplementary educational materials providing points of discussion about copyright for UK teachers and students. Drawing inspiration from well-known copyright and public domain works, as well as recent copyright litigation, the resource provides a springboard for exploring key principles and ideas underpinning copyright law and creativity, and the limits of lawful appropriation and re-use.

The film was commissioned with AHRC funding by CREATe’s Copyright User project, an online resource aimed at making UK copyright law accessible to creators, media professionals, entrepreneurs, students, and members of the public.