CREATe Report Launch: ‘A review of the causes and impacts of unlawful file sharing’ 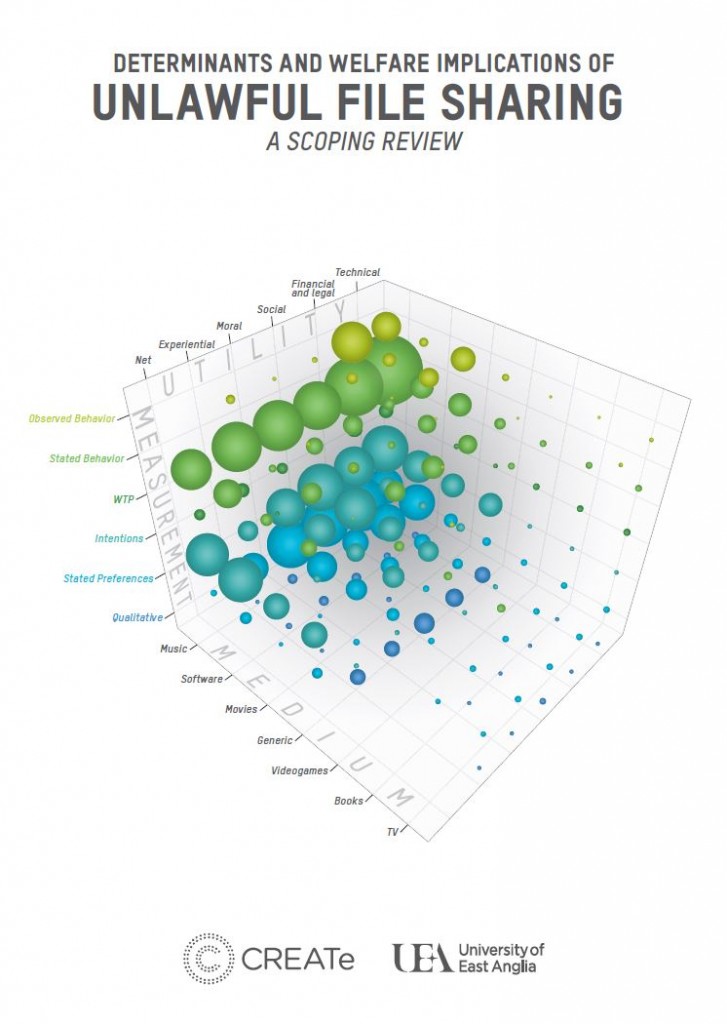 Using systematic reviewing techniques drawn from the medical sciences, a team of behavioural economists and psychologists from the University of East Anglia (Dr Steven James Watson*, Prof. Daniel John Zizzo and Dr Piers Fleming) undertook a scoping review of all evidence published between 2003-2013 into the welfare implications and determinants of unlawful file sharing. Articles on unlawful file sharing for digital media including music, film, television, videogames, software and books, were methodically searched; non-academic literature was sought from key stakeholders and research centres. 54,441 sources were initially found with a wide search and were narrowed down to 206 articles which examined human behavior, intentions or attitudes.

Whether unlawful file sharing confers a net societal cost or benefit to welfare remains unclear based on the available evidence, with both of the approaches employed – (1) looking at the association between sales and unlawful file sharing, and (2) examining people’s willingness to pay with and without the possibility of unlawful file sharing – suffering from serious limitations. This conclusion casts doubt on approaches which strengthen the civil enforcement system to meet the challenges of the internet revolution, at least without clearer evidence of demonstrable benefits of specific measures.

The study has developed a utility framework to understand potentially relevant factors whether to engage in unlawful downloads, legal purchases (or neither). They include financial and legal utility – where the civil enforcement system is clearly potentially relevant – as well as unrelated aspects such as experiential utility, technical utility, social utility, and moral utility. The findings of our scoping review have been visualised in a cubic space where the number of sources of evidence identified for each proposed determinant of unlawful file sharing are split according to evidence type and specific media. It demonstrates that our current knowledge of file sharing is dramatically skewed by method and sector.

The unlawful file sharing debate seems to have been predominantly determined by evidence from music files. Movies and software are a distant second. There is very little on videogames, books, or TV content. However, there is evidence to suggest that the determinants and welfare implications of one medium may not apply equally to another. Therefore there is a danger in basing policy decisions upon evidence heavily biased toward a single medium.

The vast majority of the studies found in the scoping review employ cross sectional survey studies which make attributions of causality extremely difficult. Furthermore, the scoping review also shows the comparative scarcity of studies that employ observed behavior as a measured outcome, whether from the experimental laboratory or from the natural world. This is a problem, particularly as there is often a gap in findings between studies that use behavior and studies that do not. In the context of financial and legal utility, we find that as new enforcement laws are introduced, there is limited behavioural data which could confirm a causal effect, particularly in the long term.

There is a definite need for more experimental economic and longitudinal samples capable of identifying causality links and starting to assess the potential of policy changes to affect unlawful file sharing behaviour. There is also a need to explore, more systematically, a wider spectrum of markets, as copyright frameworks do not normally differentiate across markets. Policies and assessments purely considered in terms of music files, or even a combination of music files and movies, may not be fit for purpose when considering other markets. Better evidence-based policy is needed.

The report was launched on April 11 at the Stationers’ Hall, London, in the midst of a large distinguished gathering of creative industry representatives, policy makers, creators and academics.

The programme also featured a panel discussion with speakers from creative economy sectors such as music, publishing, film/broadcasting, games, as well as intermediaries and users as respondents to the report.

The launch was also an opportunity for CREATe stakeholders, including those from industry, civil society and user groups, to interact face-to-face with CREATe researchers and academics as well as discuss progress of CREATe research themes. Members of the CREATe Programme Advisory Council were in attendance. 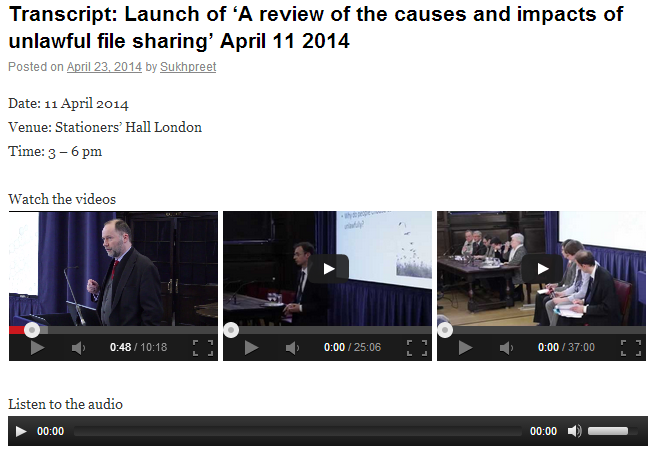 Please click here to read a full text transcript and hear the audio of the event.