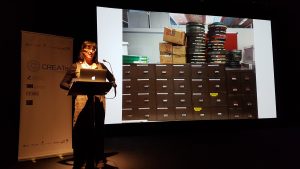 Well I found those presentations absolutely fascinating, and it’s made me realise how lucky I am to work for a news film archive in which 99.9% of the content we know exactly who owns it, and probably about three-quarters of the material in our collection actually belongs to us, so I’m dealing with quite different copyright things in my job.

So the Associated Press is a news gathering agency, and the archive has a collection of around 1.7 million news stories on film, video and now digital, so it’s a massive beast of an archive, but it’s got so many treasures in it. The archive generates income by footage sales to documentary filmmakers, news channels and increasingly online users.

So I’m going to kick off with a couple of film clips relating to Sherlock Holmes, so could we have the Conan Doyle clip first and then the Sherlock Holmes clip please.

So they’re a couple of the little treasures that are to be found in our archive. And in the olden days if you were a programme maker and you were making a Sherlock Holmes programme, and you went to Movietone and said what do you have on Sherlock Holmes, they would go to the wonderful card index.

This is a very small part of the Movietone card index here, and I’ll show you the index card for the second of those films that you saw. As an ex‑cataloguer it pains me how many typing errors there are, and spelling errors, on this index card, I’m sure you can spot some, but I do love that in the olden days they had those typewriter ribbons with a red section and a black section, so someone was typing this all out.

So if you look on the right hand side of this index card you’ll see the subsections, the cross reference sections, and you’ll notice that in the personalities section there isn’t actually an index card for Sherlock Holmes. So in the days before the collection was digitised and all the index cards were transcribed, you wouldn’t have been able to find this film if you were looking for Sherlock Holmes, unless you had thought to look for Carleton Hobbs, spelt incorrectly, or ex-Superintendent Fabian.

But in 1996 the Movietone card index was transcribed, sometimes complete with typos, sometimes not, and a couple of years later the collection was digitised so it’s now much easier to access, the metadata is fully searchable and clips can be viewed online.

So this is our online database. I did a search for Sherlock Holmes and there you see the sort of online version of the index card really. So you can view that clip and, if you had set up a licence with us as a programme maker, you would be able to download that clip within about five minutes in master quality format. Our online system is really quite sophisticated so it’s much, much quicker to find and access content now.

So in 2015 we performed a legacy upload to YouTube of around four hundred and fifty thousand clips, which included around fifty thousand Movietone items, so this is, it’s a bit blurry, this is our YouTube channel for British Movietone. It’s lovely that members of the public can see our content now, it’s all up there, and we get some great comments, sometimes good, sometimes bad.

But really the reason we decided to put our collection on YouTube was for commercial users, because we found that in recent years film researchers and programme makers are doing all their research on YouTube, they’re not going to all the individual archives necessarily unless they’re looking for very specific things, they do their research on YouTube, so we really had to have our content up there to be in the mix. So YouTube is actually a sort of shop window for our content.

We do generate income through views on YouTube but, more importantly for us in the archive, YouTube is effectively a great big copyright checking machine. So YouTube has this incredibly complex thing called Content ID and it’s a mechanism that enables us to assert our copyright on YouTube, and also identify any sourcing errors in our in-house cataloguing.

So, for example, the Associated Press has got an entertainment department and they interview lots of film stars about forthcoming roles in films, and they often include a trailer of that film in the news report, so that’s okay for news use, but we wouldn’t be able to licence it as part of the archive as obviously that material doesn’t belong to us.

But, unfortunately, human beings being what they are, quite often the entertainment department forgets to put that third party information in the source field on our database and that material gets pushed through to YouTube.

So my job, I will get an alert in my YouTube CMS saying oh this piece of material that you’re claiming to own actually belongs to Disney, and I let out a little shriek, and I quickly get the in-house database fixed, get Disney added to the source field, and YouTube is so sophisticated and, luckily we’ve got a very good technology department, so our in-house database is synced with YouTube so the minute Disney goes in the source field that clip just disappears from YouTube so before Disney have a chance to sue us, so that’s good.

So a large part of my day is taken up with fights around copyright, it’s quite exciting. So there are a lot of people on YouTube that don’t understand copyright and, I admit, I don’t fully understand it either, as we’re seeing today, it’s a very complicated thing, but because we own the content that we have on YouTube we are able to assert our copyright by using the Content ID system.

I’m currently in a fight at the moment with a company who produced a series called Zoo Babies. They’ve put all their programmes on YouTube and they’ve switched Content ID across the entire series, but they don’t own all the content in that series, they’ve obviously licensed content from us and probably other providers.

So I’ve sent endless emails containing proof that cute footage of some baby pandas rolling around on their back with their feet in the air belongs to us, and it’s going backwards and forwards because they seem to think that because they made the programme they own all the content.

So it’s complicated, but we have to persist in asserting our rights because, if we didn’t assert our rights on those pandas, that company could monetise that clip all around YouTube, so it’s a sort of financial imperative as well as enforcing our own copyright.

I also have lots of fights with angry young men who are running their own YouTube channels, and I’m not being sexist because I’ve been doing this job for about two years now, and I’ve never come across an angry young woman who’s protesting that because she video-taped something off the television twenty years ago and now has it on her channel it belongs to her. So there’s a lot of that going on which is good fun.

So there is also a very nice side to my job which is dealing with creative people who enjoy using our content and value it. For example, there’s a really nice guy called Brady Haran who, I’ll just show you something on his channel, he’s there, you can see him like third down with the glasses. He makes really well-made glossy high quality educational films that are just viewable on YouTube, he’s not a commercial programme maker, he just makes things on YouTube, but they’re really interesting and really well-made.

So I deal with Brady, and he’s used quite a bit of our Movietone content in his films, and he really appreciates being able to use it because he feels it really adds value to his creations, so that’s good.

So a lot of content owners on YouTube choose to block any use of their content by filmmakers or people who’ve just got their own channels and stick loads of stuff on it, but the AP has decided to monetise our content on YouTube.

So YouTube I think is a really interesting arena for creative use of archive content, and people who don’t have a budget and want to make creations using archive. So it’s a really good way that people can use our content without paying for it basically, so as long as they don’t mind having ads on their channel, which most of them don’t seem to, they can use our content for free on YouTube.

So also I think most people are getting a bit blind to ads on YouTube, especially if there’s pandas rolling around in the background, so it seems to be a fairly fair way of letting people use our content.

So that’s all from me really. If anyone wants to know more about YouTube, it’s what I do all day, so yes.