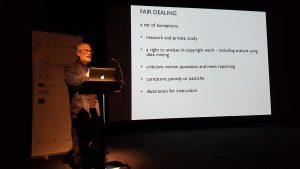 Good morning everyone. I’ll be complimenting what Annie has been saying, however, I’m also referring very much to the work which we do in the work of a regional English film archive.

Our collection and our archive is twenty-five years old and, of course, it very much reflects an archival movement very distinctive to this country which was the development of regional archives. This started over forty years ago, and now includes nine regional film archives in England and their relationship to the three national film Archives: the National Libraries of of Wales, Scotland and the British Film Institute.

Our work is incredibly organic in that it starts with not a commercial imperative, but a heritage imperative, and our work like most of our archive colleagues is to set up if you like primary relationships with a set of other public partners. So for example our work wouldn’t have existed if we hadn’t effectively founded a strategy board which consisted of record offices, museums, local authorities and universities.

And why did we come together? Because we came together to share a common mission which was to preserve moving image material that we had in our care by providing the specialist expertise which you’d find within a film archive.

So we are very regionally centred – we collect which can be of the region or indeed connected to the regional histories which are of interest to us.

What we do is to undertake all of familiar functions which you’d find in any archive. You can see it’s a flow diagram which begins with the identification, the arrival of the material, and then the steps which the archive takes both to preserve it, to make it available and then, which is really important, is to share it. And that’s of course what we’re talking about today: sharing our collections, recognising that that is done within a very specific context of rights.

Our collection is diverse. It does include Magic Lantern slides. This is something which we’ve developed this century so that’s why we call ourselves the screen archive as opposed to a film archive because of our interest in the long history of the screen which, as some of you know, it actually starts in the seventeenth century. So it’s a history of material for screen projection and of course within the early history of film and the early history of cinemas there’s a very interesting and important connection to the Magic Lantern.

Now one of the things which is important to the collection, of course, is that every single film has a history. It has a history of production, a history of use. So intellectual property rights are not something which you can ever take for granted as every single film/object has its own rights history. And therefore probably the most precious thing we have besides our collection in our filing cabinets as they contain all of this IPR information. Each film has a file.

So much of our work this century has focused on digitisation, and the making of material available, and doing it in a number of different ways, whether it’s through files which you could find within our own website, or through the BFI Player or through use of our Cloud site for creative and commercial clients.

And of course our job as ever is not just to think about the film as single objects but how they can combine to create themes and relationships.

What to collect? There’s so much to collect, and of course what’s distinctive about regional and national collections in the UK is it’s just not feature films, it’s just not television. We always are interested in THE widest possible understanding of screen production – and that includes both amateur and professional use.

Of course we always think about a film’s journey from its production and original use through to its acquisition by an archive and subsequent preservation, digitisation, documentation, cataloguing, acquisition and its many uses (commercial, cultural and creative). And this life, potentially, will never end. And for an archive, documenting this history / this journey is a priority.

Through acquisition we can then begin to uncover and understand this history, and establish its history of ownership. And to establish our right to use the film non-commercially and commercially.

In an ideal world we’d want to be able to understand anything and everything about every single work, but of course that’s impossible. We, as ever, have to be highly selective.

Underlying everything are the filing cabinets: the files, the databases, everything we have which provides us with a record of that use and the state of the materials.

We’re all familiar with copyright, and it’s something which I never really realised when I first started work in an archive just how important it is. Copyright – it sits next to me all the time, and of course it connects to what I’ve been saying about history.

And so much of the work in our collection comes from individuals we know very well. Our collection, I can’t give you a precise figure, but I would say it’s something in the region of about two thousand to three thousand individuals, and we know them, and they are often the film-makers or the descendants of those film-makers.

The majority of our collection is still within the seventy-year term, or that seventy-year term hasn’t even started yet. So we’re very, very conscious of the rights holders, and we have a dialogue with them – we like having dialogues with them. It’s a very cordial relationship, as it needs to be to enable us to do our work.

In terms of copyright – and apologies if you’re not all aware of this – it’s just not the economic rights.

But it’s the moral rights which are just so, so important, because it’s how one works to respect the right to attribution, to name the maker of the work; the right to object to derogatory treatment of a work, the right to integrity – addition, deletion, alteration or adaptation of a work that amounts to distortion or mutilation of the work, or as otherwise prejudicial to the honour or reputation of the author.

I’m not a lawyer, and indeed I believe there’s not that much case law in this country to do with moral rights, but number two [the right to object to derogatory treatment of a work] is particularly important in terms of how, once you take on the trust, and once you start to serve as a custodian, as a steward for a work, then how do you respect the moral rights of the maker, and of course, too, the moral rights of her or his descendant.

Number four is interesting too, especially with collections that are to do with amateur material – the right to privacy. I’ve been looking for, but I can’t really find much more clarification on this moral right.

We have hundreds of dealings every year with users who come to us with a request, commercial and non-commercial, over 90% of those requests are mutually satisfied, and of course it takes discussion, it’s not an automated process.

And two cases, and these are always at hand for me, of where a problem has emerged. This was a case of an artist who was particularly interested in a collection and repurposing it in terms of the creation of new narratives, new stories, and in this particular work here was a film which had been slightly recut and applied to it was a new narration, a fictional narration.

The amateur film was made in the thirties, the moral rights were still attached to it and we knew the descendants of the film-maker.

In the new film, the narration implied an illegal relationship between two of the subjects (real subjects) within the film.

So we objected to the film from being used, and it created quite an argument. The artist in this case claimed artistic freedom and we said well no, that doesn’t apply. You have the freedom to make whatever you want, but you don’t have the freedom to impinge the moral rights of the owners of this property.

The second case addresses the right to attribution. This was a case of a television programme to which we had sold archive material. One of the members of that production team died and his son acquired a collection of tapes, and he believed, that he was now the owner of these television programmes. He then made this particular programmes, made he believed were made and owned by his father, available to a commercial film library – without our permission.

Both cases one and two present individuals who were not aware of the copyright situation and especially of moral rights. They were both acting in good faith – my freedom as an artist, my right as a son to use my father’s property – but what both cases illustrate for us is the diligence required.

I think probably every time we engage with a user and talk about rights, the potential user very rarely has an understanding of what the rights are, so our role is to provide education.

But it’s also to enable. We have a rate card and we use it for a strict commercial request, but when it comes to community groups, schools, artists, students, academics, we often relax and work to make the material available for free use – as long as the copyright is respected.

And how should we consider fair dealing?

It is possible to take material from us – by downloading – without permission, and then to incorporate it new work through quotation for the purposes of criticism, review, news reporting and for the purposes of caricature, parody and pastiche. How do we make sense of that, especially in relationship to moral rights?

To take family films and re-purpose them for the purposes of humour? Is that an acceptable use?

As part of a university, as part of a community of public sector collections, it’s really important that we defend the collection and the rights attached in order to ensure that the material cannot be used if it contravenes our understanding of equalities, non-discriminatory behaviour, and indeed the rule of law.

But of course most of our transactions we never move into this territory. But we do need to understand how a film is to used, and through that conversation we will draw attention to moral rights in to ensure that the new use falls within acceptable parameters. Thank you.