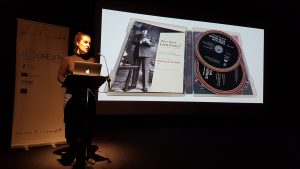 Thanks Bart. It’s actually fantastic to see so many people here. A special welcome to everyone who’s travelled in, a shout out to all the students from Bournemouth who made it to the bus at 7:30, fantastic, thank you Wendy for organising all of that, people who’ve travelled in from Amsterdam, and a special thank you to Kate Bond over there who’s all the way here from Sydney.

My name is Claudy Op den Kamp, I’m a lecturer in film and a researcher in the Centre for Intellectual Property Policy and Management at Bournemouth University. I will be chairing this morning’s panel which will comprise of Annabelle Shaw from the BFI, Frank Gray from Screen Archive South East, Jenny Hammerton from Associated Press, and then we’ll have Leontien Bout from the EYE Film Institute as a legal respondent after that. But first, I will give an introduction about the restoration of the 1916 film, Sherlock Holmes. Both Céline Ruivo from the Cinémathèque Française and Rob Byrne from the San Francisco Silent Film Festival couldn’t be here today, so they sent me their materials and I’ll be doing it instead of them, so a major thank you to them.

But before I do so, I would like to thank both Bart and Ronan for asking me to organise this day with them. Copyright and creative reuse of archival films is basically my favourite topic in the world, so I couldn’t believe my luck when they asked me to help, and this help has basically involved inviting a bunch of people that I really like and admire, plus today will involve Buster Keaton and Neil Brand at the end so that’s a pretty good day in my book, so thank you.

In a way, I really like starting the day with a talk about a film restoration. It’s my own professional background and in one way you can see it as the end of a film’s life, you know, a hundred years after it was made it gets restored, but you can also see it as a sort of beginning, so it can go on to fulfil all sorts of interesting roles in future endeavours about which we’ll hear a lot more this afternoon, I’m sure.

The 1916 film Sherlock Holmes, starring the great American stage actor William Gillette was based on the play, the adaptation that Gillette wrote himself. The film had long been considered the great missing link in the history of Holmes on the screen, the one opportunity to witness the archetypal Holmes, the actor who defined for generations what the detective looked like, how he moved, and what he wore, and basically a lot that came after can be seen to have been patterned on him.

In February 1916, Gillette signed a contract with the Essanay Film Studio in Chicago, which was famous for its work with Charlie Chaplin, to bring his play to the screen.

The film was released a mere three months later in May 1916, and I guess films were made a lot quicker back then. It was released as a seven-reel drama and it was directed by Arthur Berthelet. The film got good reviews at the time and it had a typical life of a film upon release in those days, so it went to the big theatres, then it went to the small theatres, and after that it went out into the hinterland. After that it didn’t go to Netflix, or DVD, so it sort of disappeared from view, it had run its course.

The film at the time, which is important to mention, only got an American release because World War I was going on on this side of the Atlantic, so there was no export market for the film.

In 1919, George Spoor, who was one of the founders of the Essanay Film Studio, decided to capitalise on both the conclusion of the war but also the fact that France at the time was mad for serial thrillers. He decided to divide the film into four chapters, translated the intertitles into French and then shipped it off to Paris. In Paris it premiered in December 1919. The film was shown in four weekly chapters, then ran its course there, and of course also disappeared from view in France.

So for nearly a hundred years it was believed that not a single copy of the film had survived, nor both the American and the French version. So the first Sherlock Holmes film starring the man that personified the role, the only film in which William Gillette actually ever appeared, was gone forever … until April 2014.

The same nitrate duplicate negative that George Spoor shipped to Paris in 1919 was identified in the collections of the Cinémathèque Française, and this is what that looked like, nine cans holding forty-five individual small rolls of film.

The reason why it is in this condition is actually a great reason to talk about how prints were assembled in those days. When we think of making a copy these days you hit copy on a film file on your computer, drag the file from one folder to another, and you have a perfect copy.  Even in the photochemical days, you had a negative and then you printed it into a positive print and you had a new copy.

But during the silent era, films were actually assembled by hand. So this was a tinted film which means that the entire film in this case had colours, so each of these negative rolls would be printed onto black and white positive film stock, and then depending on the roll it would’ve been coloured, and in this case either orange or blue, and it actually would’ve been immersed in a dye bath.

These rolls would then be hung to dry and then women, they were always women, with scissors, would literally cut the strips, assemble them in the right order, and then ship them out to the theatres. So every single print was a unique artefact, I think that’s really important to mention, and it was a handcrafted artefact.

Film restoration is unlike other kinds of restoration. If you restore a painting for instance you will work on the actual artefact, you’d clean it up maybe a little bit and that artefact gets represented to the audience.

In film … so I’m going to start this clip … you don’t actually work on this negative, your end product is actually a new artefact, so a new copy, a new film that you can show. So instead, you make a scan of this negative that you see on the left, which basically means that you take a very high resolution photograph of every single frame of the film.

In the case of Sherlock, the team ended up with well over a hundred and fourteen thousand frames and they were then digitally cleaned, as you can see here. The image was stabilised because it kind of moves because of the warping and the deforming over time, and dirt and scratches that you still see on the left were also removed.

Then the team went to the lab and sat in the dark for a couple of days where every shot of the film was digitally colour matched, and this is what I meant earlier with the orange and the blue because you switch between interior and exterior, as you can see the shot of Sherlock arriving, and once that was done the film gets output back onto a film negative, so yes it does go back to film, in this case polyester which is done for longevity reasons.

Here’s the team, on the left we see Celine Ruivo from the Cinémathèque Française, in the middle is Rob Byrne from the San Francisco Silent Film Festival, and on the right is Simone who is the colour grader at the lab, L’Immagine Ritrovata in Bologna, Italy.

So a quick note on the copyright of the film. The film is a US film from 1916 and in the US any work with an authorised publication date from before 1923 is automatically in the public domain. This does not necessarily mean that the work is in the public domain elsewhere as well.

The Cinémathèque Française did their own research for France, which involved establishing when some of the makers who determine the length of copyright passed away, and then after their research decided to bring the restoration out on DVD which is now one of their best-selling products, undoubtedly due to the enormous Sherlock Holmes’ fan base.

Neil Brand who you’ll hear perform later this afternoon composed and then performed a new score for the film on the DVD, and both Annie and Leontien, just to finish off, will comment more on risk assessment later, in the context of their institutions.

But I think for now it suffices to say that although sometimes you know that you are legally in the clear so to say, what happens in practice a lot is that institutions are and sometimes need to be excessively cautious with permissions in light of specifically non-legal reasons, for instance their relations with both existing and future donors.

So I’ll leave it like that, and I would like to give the floor to Annabelle Shaw of the British Film Institute who will introduce herself.