By Ula Furgal6 December 2022No Comments

December marks the beginning of an important season at the University of Glasgow: a winter graduation season. On 5th December the School of Law graduates received their diplomas and best wishes for their future adventures. Members of the CREATe team were happy to partake in the celebrations and to raise a glass of bubbly to our excellent LLM students and a newly conferred Doctor of Laws during a small gathering in a refreshed CREATe Hub. 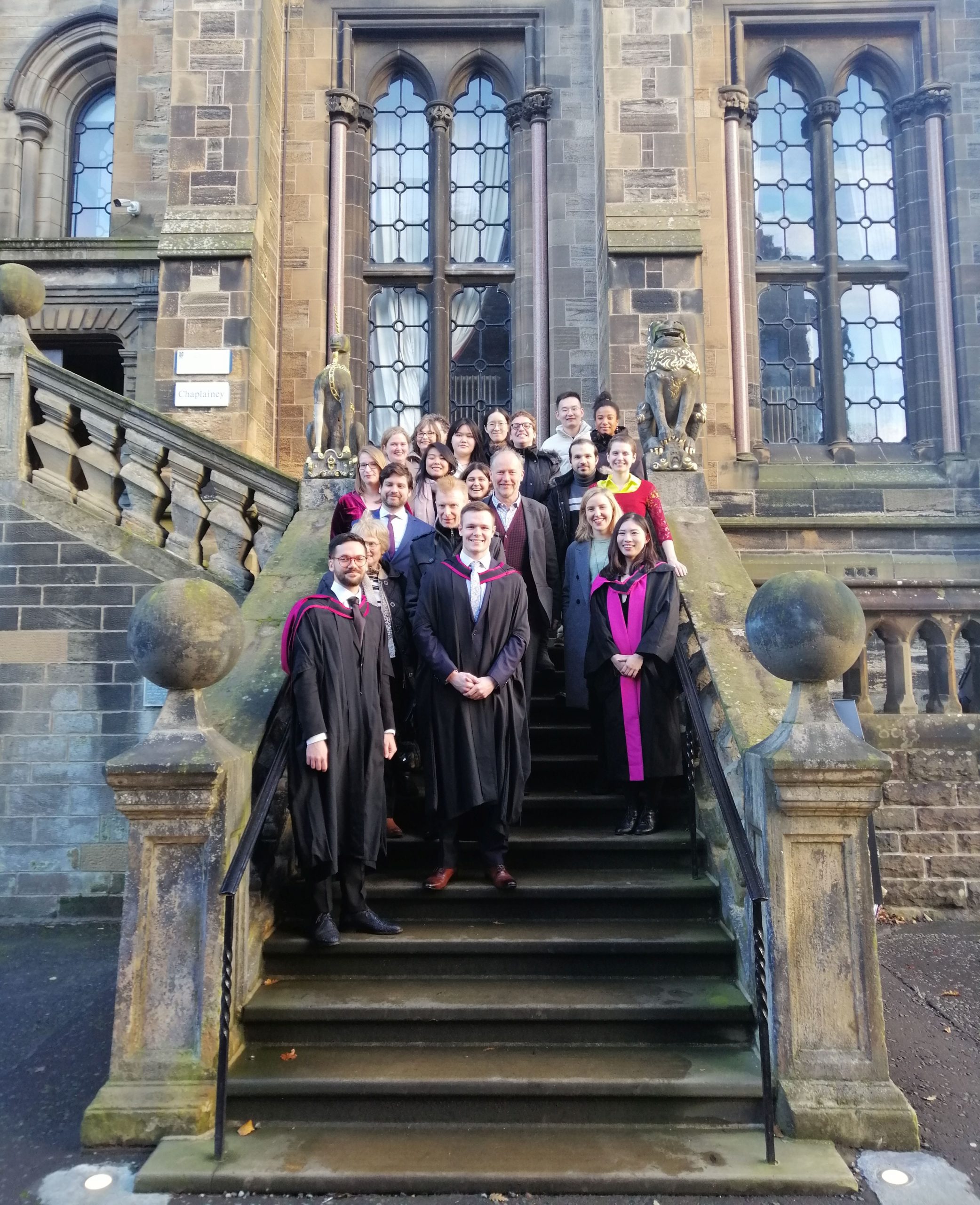 Jiarong Zhang was awarded a doctorate in law by the University of Glasgow on the basis of her thesis Hierarchy of protection’ and ‘hierarchy of culture’: the effects of copyright law on traditional music prepared under the supervision of prof. Martin Kretschmer and prof. Thomas Margoni (KU Leuven). Since defending her thesis, Jiarong has joined Trinity College Dublin as an Assistant Professor in Intellectual Property Law. We wish her all the best in her new role!

CREATe leads the LLM in Intellectual Property & Digital Economy, offered by the Law School at the University of Glasgow. The programme provides students with a unique opportunity to explore the rapidly developing digital environment through the lens of intellectual property, and to engage with the current policy discussions in which CREATe remains an active participant. All IP LLM students are required to submit a masters dissertation on the topic of their choosing. They work on their dissertations independently, under limited guidance of a supervisor.

In 2021, CREATe opened a new opportunity for authors of excellent postgraduate research to publish their LLM dissertations in the CREATe Working Papers series. Following the success of the first edition, we decided to make the “Outstanding LLM dissertations” an integral part of the series, to showcase the best work of our LLM students, reward their efforts, and inspire our new students when preparing their own dissertations in the future.

Following nominations by the IP LLM supervisors, the CREATe teaching team selected two LLM dissertations submitted in the 2021/22 academic year to be published in the Working Paper series. The authors of the outstanding dissertations are:

Michele De Iaco: The challenges of memes in copyright law: between humour and value(s)

We are excited to bring these two excellent pieces of research to the wider academic community. You can read the abstracts and access the full text of the Outstanding LLM Dissertations 2022 below.

Apart from being an author of an excellent dissertation, Michele De Iaco has also received the Cloch Prize in Intellectual Property and the Digital Economy for 2021/22 academic year. The Prize, sponsored by Cloch Solicitors, is awarded to the best student on the IP LLM program.

Many congratulations to Jiarong, Michele and Owen! 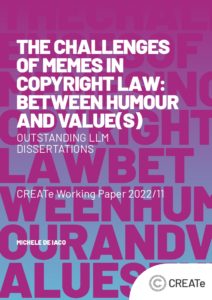 The challenges of memes in copyright law: between humour and value(s)

This paper analyses the legal issues concerning the internet memes phenomenon, by evaluating in particular the current EU copyright framework. The search for a definition and copyright classification of memes cannot produce clear results. This is due to the nature of the pre-existing contents that memes usually use, and the fact that the absence of licences may entail infringements where no exception or limitation is applicable. Thus, memes easily imply copyright-relevant acts. On closer inspection, memes seem to occupy a grey area between reproduction, adaptation, transformativeness, and even authorship and originality. This uncertainty, combined with the discrepancy between law and the practice of online communities – which seems to better address the nature of internet memes as ‘commons’ – constitutes a challenge for copyright.

To assess the legal framework, this paper argues the existence of three values hidden behind memes. First, a fundamental-rights-related value, which notably involves the freedom of expression of memes creators, and has an impact on democracy. Secondly, memes represent a remarkable example of the economic value that contents may acquire in the digital environment. In particular, they can lead to indirect benefits (e.g., ‘meme marketing’), create new digital jobs or behave as assets. Thirdly, memes have a cultural value, since not only can they be vehicles for cultural contents – as the promotion of cultural heritage – but also they represent a peculiar kind of ‘contemporary creativity’ that is itself culture. These values together emphasise the relevance and the potentialities of memes, and therefore the need for them to be clearly lawful.

On this basis, this research claims that the current EU copyright framework does not offer the certainty of the lawfulness of memes, and thus it undermines their values. Notably, while specific exceptions may apply in narrow cases, there is currently no general defence for memes. Indeed, the parody exception after Deckmyn is still critical – especially for the concept of fairness – and similarly the quotation exception is debated among Scholars. Consequently, they might only be applicable to some memes. Furthermore, the new EU intermediaries’ liability provision (Article 17 CDSM Directive) was initially perceived as a “Memes ban”, but despite the reassurances, its safeguards are not enough. Ultimately, memes fall into the flexibility-certainty debate on exceptions and limitations and this paper argues the importance for EU lawmakers to explore new ways for addressing the issue of this communitarian and valuable phenomenon to reduce the gap between law and practice. Accordingly, it proposes some possible solutions that may be taken into consideration, such as the adoption of a ‘right to meme’, a more flexible limitation, or a specific exception. 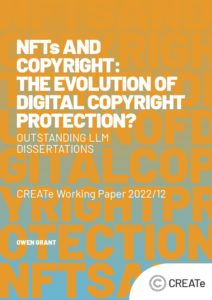 NFTs and Copyright: The Evolution of Digital Copyright Protection?

Non-Fungible Tokens NFTs are digitally scarce, non-exchangeable cryptographic tokens that represent an underlying work such as a picture or video and exist on a blockchain, mostly used to trade in digital art and collectibles. They are the most recent blockchain development and offer a great deal of promise for the future in numerous sectors. Despite this they are unregulated and suffer from a bad reputation and illegitimacy that exists across current public blockchains and cryptocurrency, due to fraudulent actors and misconceptions of what is owned with an NFT.

In this paper I posit that NFTs could be used to upgrade Digital Rights Management (DRM) through two possible solutions; a copyright register on a blockchain or moving DRM to blockchain – Distributed Digital Rights Management (DDRM). The objective of these solutions is to solve the ongoing problem of digital piracy, which DRM has never been successful in stopping through present-day encryption or content-blocking services. The other benefit is for authors to be guaranteed fair remuneration for their works by cutting out some unnecessary intermediaries and issuing licences through smart contracts. I consider that if successful, these solutions constitute an evolution of digital copyright protection, though they must first overcome legal, practical, and logistical problems.

For either solution to be successful, smart contracts must be able to constitute valid legal contracts with binding obligations as all NFTs contain these to execute terms set by the person creating the token (minter). I show that under current Scots law and under England and Wales contract law smart contracts can satisfy formation requirements of a contract, but they still must overcome the challenges presented by blockchain and a lack of intermediaries such as an established dispute resolution mechanism.

I demonstrate in this paper that current digital copyright protection could be upgraded with the use of NFTs, specifically in giving authors direct control over the following DRM functions for which previously they were beholden to intermediaries: Assignment; Licensing; Royalty payments; and Registration. Despite this I outline that each solution must overcome some significant challenges, leading me to conclude that a blockchain copyright register utilising NFTs is not likely to be attempted in the near future but could offer huge benefits for exploiters as well as authors. DDRM is a solution already being developed by RAIRtech and is by its nature an idea that numerous companies can compete to develop best.

In the final analysis I conclude that despite their issues NFTs are the evolution of digital copyright protection. The bar has been set relatively low with current DRM, meaning an improvement would constitute an evolution, which is evidenced by the lack of reliable ownership information, authors’ options for revenue, and present-day piracy statistics. 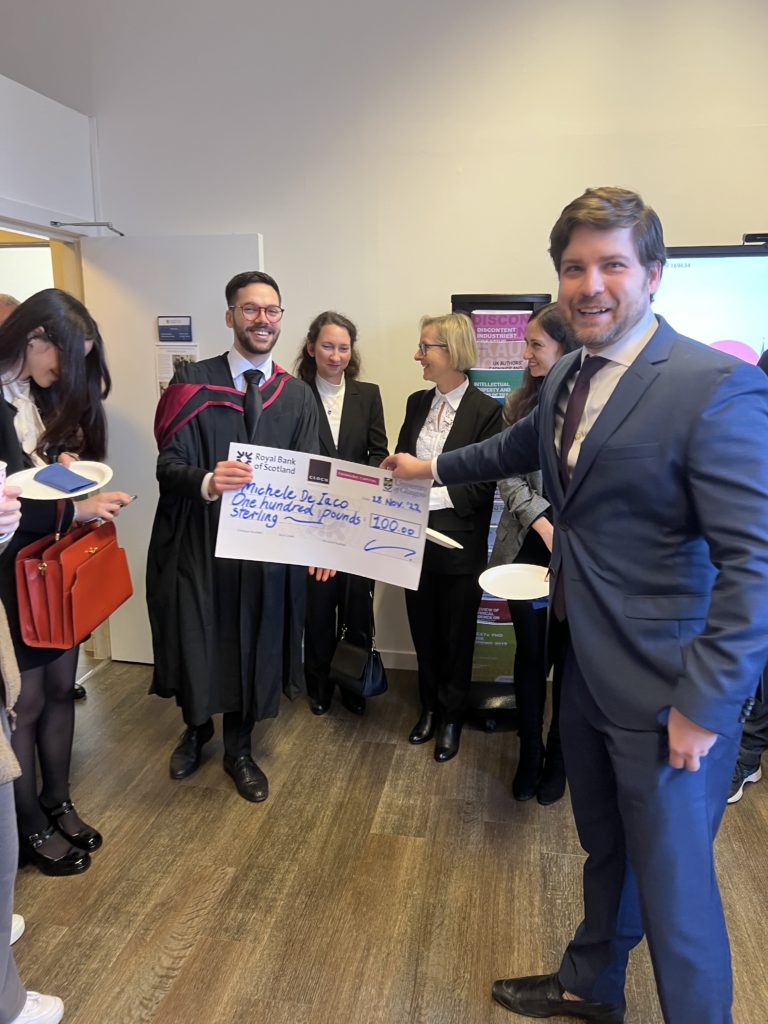 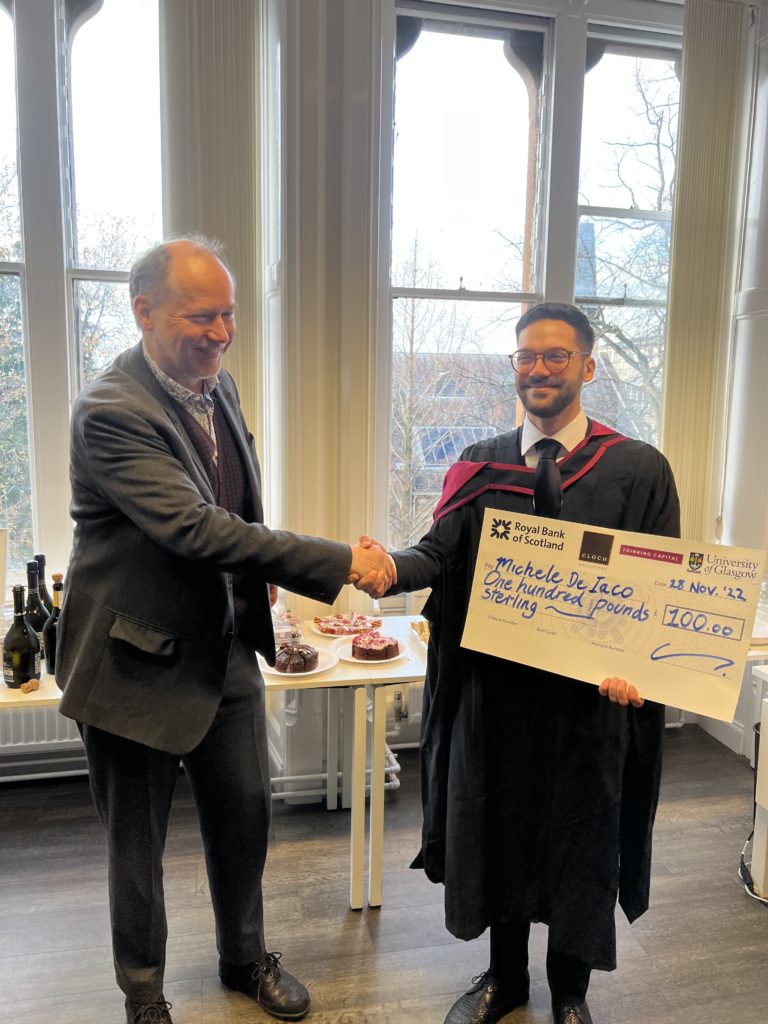 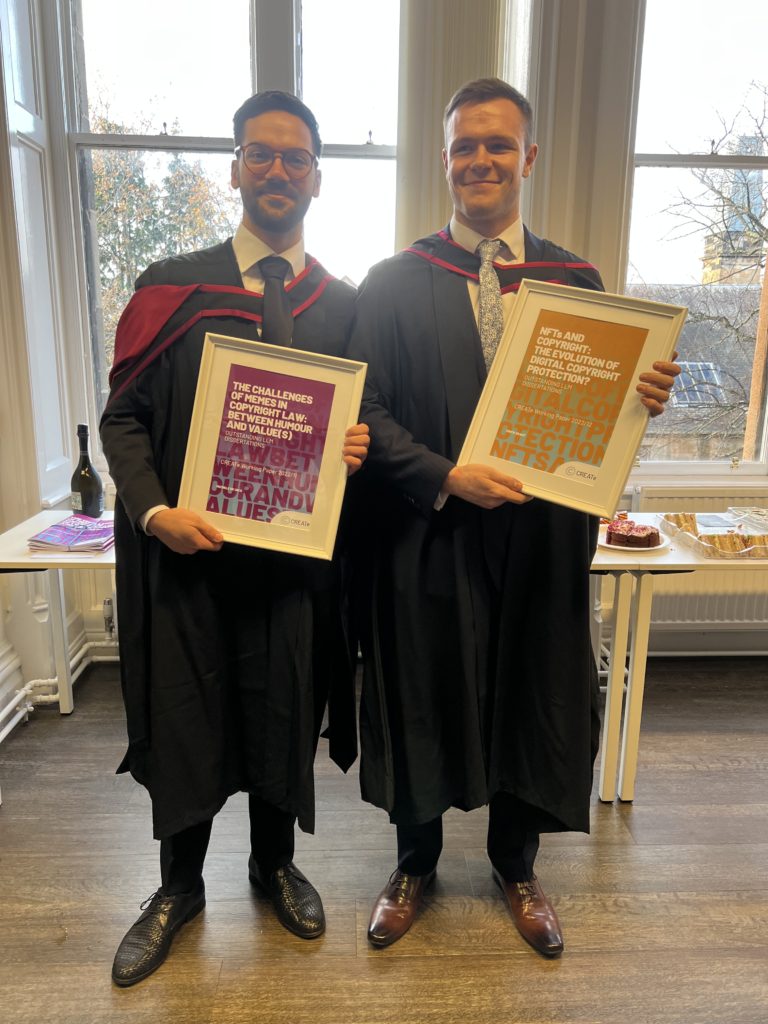 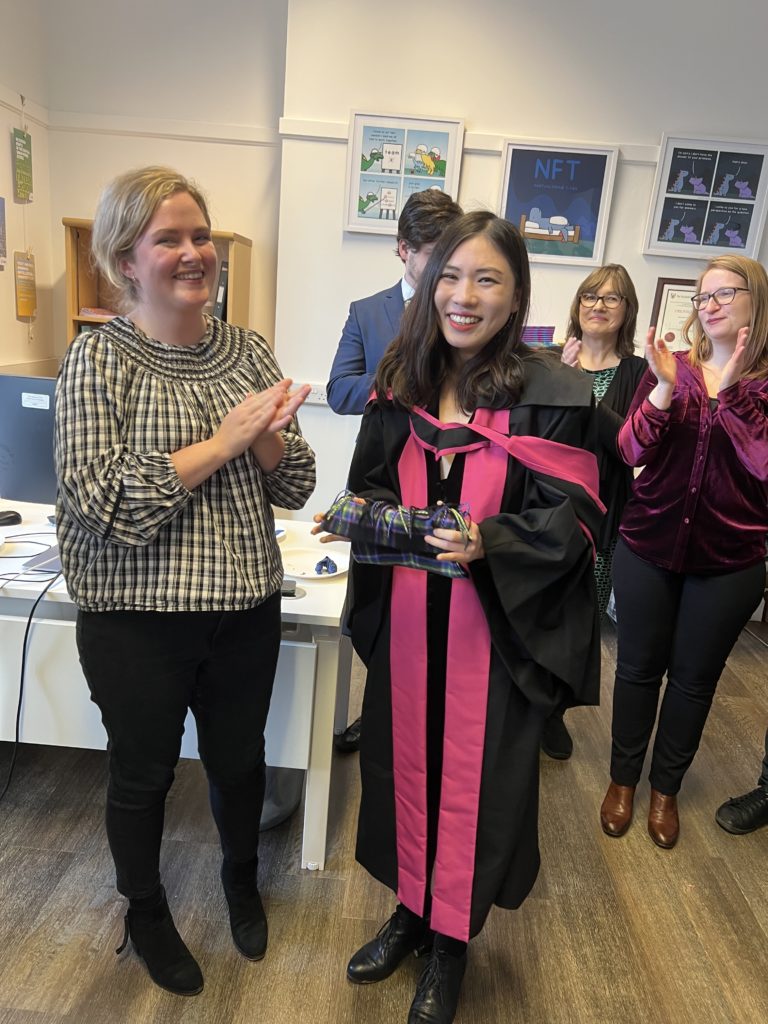