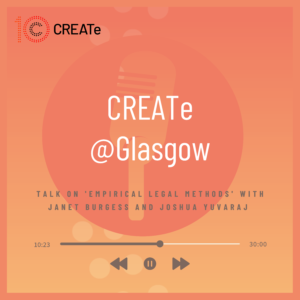 In this recorded interview, CREATe PhD researcher Aline Iramina asks two recent PhD graduates, Dr Janet Burgess (University of Glasgow) and Dr Joshua Yuvaraj (Monash University, Melbourne, Australia), about their experiences of using empirical research methods. Both Janet and Josh agreed wholeheartedly that empirical research is an important but undervalued means of investigating how law is operating in the real world, by accessing sources of information which cannot be reached through traditional black letter law alone.

Janet’s experience of primarily qualitative methods included focus groups, Q-Sorts (which explore correlations between persons or whole aspects of persons, asking participants e.g., what is meaningful and and significant from their perspective), a sentence completion exercise, all of which proved invaluable at identifying how amateur musicians in the UK find out about, perceive and apply copyright law in practice. Josh’s use of primarily quantitative methods, including content analysis and large-scale computational analysis using the Python programming language, provided new insights into the different mechanisms by which creators can reclaim copyright in works to explore new avenues for reward and cultural dissemination.

After setting out their definitions of empirical research and explaining the specific methods they used, Janet and Josh outline the benefits and opportunities which their research methods provided, highlighting the informative nature of the resultant data, very different from the evaluative or normative nature of much black letter legal research. Empirical research methods are not without their challenges and limitations, however, perhaps especially when used to assess aspects of law. Both Janet and Josh clearly explain some of the difficulties they faced, such as finding enough participants, or the variable quality of available data. They also discuss potential issues with the quality of the evidence obtained through empirical methods and the importance of setting out any limitations. Training was seen as key although the widely-held (but incorrect) impression of empirical research as the ‘poor relation’ of black letter law meant that training might only be available through other faculties and sources rather than through law schools. However, Janet and Josh both agreed that the benefits of empirical research methods far outweigh any challenges and they end the discussion by passing on some helpful recommendations.

This was an insightful talk especially for future empirical legal researchers who are starting their academic life: masters’ students, PhDs, and early career researchers. It provides an introduction about empirical legal methods, their opportunities and challenges, and recommendations for those who are thinking about applying them in their research. You can listen to this talk on CREATe page on Spotify.

This was the first of a series of talks that CREATe is planning to organise to celebrate its 10th anniversary.

Congratulations again on your doctorates, Janet and Josh, and many thanks for sharing your experiences in this first conversation around research methods.