Destroying or Creating Art Through Intentional Destruction: Practical Consequences of the Legal Uncertainty

Destroying or Creating Art Through Intentional Destruction: Practical Consequences of the Legal Uncertainty 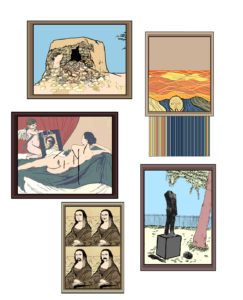 When applied in a legal context, this interpretation gives rise to regulatory issues, particularly in property and copyright law. Property law determines whether an owner has a right to destroy property that they own and copyright law purports to regulate and protect art by providing artists and owners with economic and moral rights. If Adams’ distinction is applied here, property and copyright law must be able to distinguish between harmful destructive acts that the public is interested in preventing and beneficial destructive acts that the public is interested in protecting or even promoting. Otherwise, the current legal framework has the potential to stifle artistic freedom and creativity.

In property law, the ‘right to destroy’ debate considers whether property law does or should recognise a right to destroy. This right is especially controversial when a work has artistic or cultural value, as it can give rise to a conflict between private and public interests in its preservation. Even though the right to destroy is the most powerful of the bundle of rights framework, as property can cease to exist (wholly or partially) following a person’s exercise of it, the right has not yet been expressly incorporated or excluded from UK property law’s bundle of rights (see Alexander, ‘Of Buildings’ (2018); Sax, Playing Darts with a Rembrandt (1999)). As such, it is unclear whether an artist or subsequent owner has or should have a right to destroy works which they privately own, but the public has an interest in maintaining.

In copyright law, the international Berne Convention for the Protection of Literary and Artistic Works of 1971 Art.6bis(1) gives artists a moral right of integrity. This is articulated as a right:

(…) to object to any distortion, mutilation or other modification of, or other derogatory action in relation to, the said work, which would be prejudicial to his honour or reputation.

Interpretations of the integrity right and what it encompasses vary considerably among jurisdictions and legal academics. For instance, in India the courts have held that destruction falls within an artist’s moral rights to integrity, as an extreme form of mutilation (Sehgal v Union of India [2005] FSR 829). In contrast, in Switzerland and the US, artists have statutory rights to object to destruction, distinct from their moral right to integrity (Swiss Federal Copyright Act 1992 s.15, US Copyright Act 1976 s.106A(3)(B)). 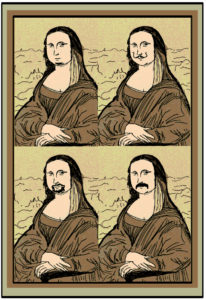 In the UK, the moral right of integrity is expressed as a right for artists’ artworks not to be subject to ‘derogatory treatment’ (Copyright Designs and Patents Act 1988 ‘CDPA’ s.80(4)).  ‘Treatment’ is taken to include additions, deletions, alterations, or adaptations of the work, and ‘derogatory’ treatment is understood as treatment that amounts to a distortion or mutilation of the work or treatment that otherwise prejudices the honour or reputation of the artist (Ibid. s.80(2)). It is uncertain whether destruction fits within this definition of derogatory treatment. However, the right is practically important because it determines whether an artist can object to the destruction of artworks they have created by exercising the right. Nevertheless, the question remains untested by the UK courts. Although, in the case Harrison v Harrison [2010] EWPCC 3; [2010] ECDR 12, the court interpreted ‘treatment’ as ‘a broad, general concept’ which:

(…) implies a spectrum of possible acts carried out on a work, from the addition of say, a single word to a poem to the destruction of the entire work.

On the face of it, this appears to imply that destruction is included within the definition of derogatory treatment. However, this case concerned a literary rather than artistic work. This distinction is crucial because materiality is not necessarily required for copyright to subsist in artistic works (Cuisenaire v Reed [1963] 5 FLR 180) whereas it is required for literary works (CPDA s.3(2)), and materiality fundamentally impacts understandings of destruction. As it is unclear from the current case law whether artworks require a material form for copyright to subsist (Derclaye, ‘Debunking some of UK copyright law’s longstanding myths’ (2013)), it is unclear how destruction of an artwork’s material form would impact the right. Furthermore, legal academics tend to predict that UK copyright law does not intend to include the destruction of artistic works within the remit of the integrity right (Wilson, Art Law (2019), 23; Stokes Art and Copyright (2012), 94; Speck and Laddie, The Modern Law of Copyright (2018), 38.27-38.29). This is largely due to the risk of confusing the intellectual property of an artwork with its material form, and therefore the wider right to destroy debate, discussed previously.

There are considerable, practical consequences that stem from the current legal uncertainty in the UK. For one, it is unknown whether artists have a right to destroy their own artworks, or whether artists can incorporate and transform other artists’ works into their own using destructive techniques. This is important to the art world because Destructionist and Auto-Destructive artworks that self-destroy acquire their cultural significance from their destruction. As a recent high-profile example, Banksy’s ‘Love is in the Bin’ (2018) was created when Banksy’s ‘Girl with Balloon’ (2002) was shredded live at auction. This destruction was hailed by the art world as the creation of a new artwork, as can be demonstrated in its re-titling. Such self-destroying artworks are likely the clearest representations of destruction as art, and it is equally clear that property and copyright law should therefore protect them. However, if there are unarticulated restrictions on an artist’s right to destroy, this could impose limitations upon artists in creating Auto-Destructive works. Similarly, if an individual created Auto-Destructive art using another’s artwork, it is unclear whether the artist would have a right to object to such treatment. As an artist’s right to destroy and right to object to destruction are both uncertain, the legal status of art involving destructive techniques is dubious. 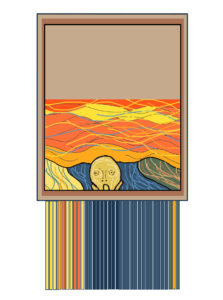 Additionally, if an artwork is privately-owned, it is unclear whether its owner has a right to destroy it, or its creator has a right to object to the new owner’s destruction. This is important because this is more likely to constitute the destruction of art, as private destruction of culturally significant artworks may be against the artist’s wishes or the wider public interest. As an example, there was public outcry when it was discovered that Lady Churchill had destroyed renowned British artist Graham Sutherland’s portrait of Winston Churchill (1954) because she and her husband did not like it. In such circumstances, although it is unclear where an artist can object to such destruction using their integrity right in the UK, it is also unclear how such objections would be enforced, especially if an original artwork is destroyed in secret. This helpfully illustrates the complexity of rectifying the conflict between private and public interests in this context.

Overall, the intentional destruction of art includes practices that are interpreted by art historians as positive, artistic acts that should be protected, as well as negative, harmful acts that should be prevented. Despite the importance of this distinction, UK property and copyright laws have not yet provided clear guidance on how they regulate or interpret the intentional destruction of art. This is remarkable, as it remains unclear whether these areas of law recognise the distinction between the destruction of art and destruction as art, and how they impact creativity and artistic freedom. This means that although copyright law expressly strives to protect creative expressions, artists, artworks, and the public interest in them, in the context of destruction, it appears as though copyright law largely ignores artistic thought altogether. To rebalance the relationship between art and law, the law must interact with art historians’ interpretations of destruction to understand what destruction means to art.

All images credit to Rosie Wilson.