On 9 June, just one day after the Advanced Research Centre’s (ARC) inauguration, the question of Scotland’s media future was revisited and debated in the University’s sparkling new building.

Participants came from the worlds of media regulation, government, broadcasting, the press, and innovative media ventures, along with academics from the humanities and the social sciences, from both north and south of the border. The meeting was intended to kick-start a moribund debate. 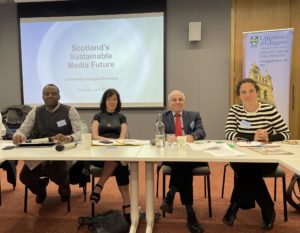 With free-flowing discussion under the Chatham House Rule, the agenda moved from questions of organisation and policy to those of the role of sentiment and lack of trust in the changing media ecology. The Rule means that what was said can’t be attributed to individuals. But there was a widely shared sense that overwhelming concern with the constitutional question – regarding Scotland’s place inside or outwith the Union –  has overshadowed the prospect of productive new thinking. Moreover, there was also a strongly articulated view that the present media order was increasingly exhausted in the digital era, that rear-guard actions were now attempting to safeguard a heavily beleaguered public interest, and therefore that the urgent rebuilding of a new, cross-generational, civic awareness was imperative to inform future policy, institutional developments, and broker a new deal for citizens.

A cross-College venture, this initiative was right in line with the ARC’s aspirational agenda to break down barriers and envisage new futures.