By Kenneth Barr8 April 2022No Comments 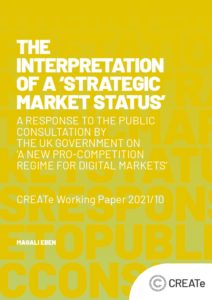 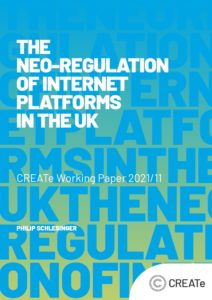 Developments in the emergent field of platform regulation served as a catalyst for three related contributions in this area in late-2021. Martin Kretschmer and Philip Schlesinger’s policy brief for the AHRC Policy and Evidence Centre (PEC) identifies and defines, UK ‘neo-regulation’ as, ‘an inter-agency, executive-led approach, oscillating between digital libertarianism and digital authoritarianism in an under-examined space that is taking shape during the initial stage of Brexit’ (Kretschmer and Schlesinger 2021). These themes are also central to a CREATe Working Paper on, ‘The Neo-Regulation of Internet Platforms in the UK’. In this paper Philip Schlesinger maps the development of UK policy and finds that,  ‘the present neo-regulatory moment has been shaped first, by Brexit (the UK’s withdrawal from the European Union) and second, by the creation of a voluntary collaborative forum by a diverse group of regulators’ (Schlesinger 2021). Kretschmer and Schlesinger were interviewed for PAYMNTS TV on the subject of  ‘The Birth of Platform Neo-regulation in the UK’.

Competition Law perspectives in this area of tech regulation can be found in the CREATe response to the UK Government public consultation on: ‘A new pro-competition regime for digital markets’, drafted by Magali Eben, CREATe’s Competition Lead. In the context of the Government’s newly formed ‘Digital Markets Unit’ (DMU) established within the Competition and Markets Authority (CMA), this response focuses on  proposals  related  to  the  identification  of firms with ‘Strategic Market Status’. The response was developed as a CREATe Working Paper, which stresses that, ‘it is essential that the notion of a ‘Strategic Market Status’(SMS) be  more  clearly  defined,  and  its  relationship  to  the  notion  of  dominance  in  competition  law expressly set out, for the regime to be effective’ (Eben 2021).

The UK’s departure from the European Union also informs CREATe’s response to the Intellectual Property Office (IPO) public consultation on : ‘Post-implementation review of the repeal of CDPA 1988 section 52: call for views’. Drafted by Luis Porangaba, with a particular focus on copyright in product design, this response makes recommendations on opportunities in the post-Brexit environment for the UK to, ‘set its own policy and offer a distinctive innovation space for creative industries including, inter alia, the fashion industry’ (Porangaba 2022). A version of this response was published in European Intellectual Property Review (EIPR), January 2022, and as a CREATe Working Paper. 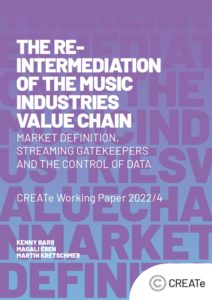 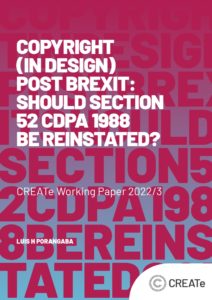 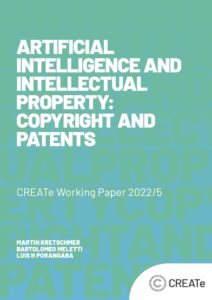 Early-2022 has been similarly lively in terms of consultations on relevant themes.  The IPO  consultation on, Artificial Intelligence and Intellectual Property: copyright and patents which closed in January 2022, sought, ‘evidence and views on a range of options on how AI should be dealt with in the patent and copyright systems. This outcome will support the AI strategy focus on growth of the economy through widespread use of AI technologies’. This elicited a CREATe response by Martin Kretschmer, Bartolemeo Meletti and Luis Porangaba. This timely submission, in an area where, ‘policy makers are in a difficult position to assess reform proposals relating to Artificial Intelligence and Intellectual Property because evidence remains scarce’ (Kretschmer et al 2022) was published in the Journal of Intellectual Property Law and Practice and also appears as a CREATe Working Paper.

Most recently, the Competition and Markets Authority (CMA) invited responses to the Music and Streaming Market Study Statement of Scope. This market study came about as a result of a DCMS inquiry into the Economics of Music Streaming where CREATe also submitted evidence. Responding to recommendations made in the DCMS Committee report, which cited the CREATe submission of evidence a number of times, the Government invited the CMA consider a market study, which the CMA duly launched in January 2022. The CREATe response to the Statement of Scope, by Kenny Barr, Magali Eben and Martin Kretschmer, identifies three key areas where the market study should afford particular attention: the definition of ‘music streaming market’; the relationships between self-release creators/micro-producers and music streaming services; the control, interoperability and portability of data (Barr et al 2022). This submission was recently published as a CREATe Working paper and will feature as an opinion piece in EIPR.

The array of policy responses reported here, coupled with pending consultations on related matters in UK, EU and global settings, indicates that CREATe will continue to be an energetic contributor to debates around these issues. A comprehensive chronological record of contributions since 2013 can be found on the Policy Responses page of the CREATe website.

M. Eben (2021) ‘The interpretation of a ‘Strategic Market Status’: A response to the public consultation by the UK Government on ‘A new pro-competition regime for digital markets’’. CREATe working paper 2021/1