By Admin7 February 2022No Comments

CREATe presents the second entry in our 2022 series of working papers: “Mapping International Enquiries into the Power of Digital Platforms” (2022/02) by Terry Flew (Professor of Digital Communication and Culture, Department of Media and Communication) and Chunmeizi Su (Postdoctoral researcher) both of The University of Sydney. 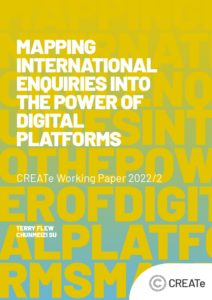 In a timely intervention that anatomises the current state of policy debate on platform regulation, Terry Flew and Chunmeizi Su draw on a systematic survey to present a new analysis. Their CREATe Working Paper, Mapping International Enquiries into the Power of Digital Platforms, analyses 20 public inquiries pursued in seven different states, as well as recent policy thinking in the European Union and the United Nations.

This much-needed study contributes significantly to informed debate on the repertoire of official positions that now address digital platforms’ power. It also illustrates how the framing of dilemmas engendered by major platforms’ digital dominance is diversely distributed in key democratic states. We hope it will engender methodological discussion and innovation that sheds light on how the debate is being developed on an international plane.

For those familiar with the present state of the art, it is no surprise to learn that two major portfolio issues now dominate the current scene in liberal-democratic states: market competition and online harms.

In underlining this dominant agenda, the Sydney duo’s research connects closely to our own work. CREATe’s survey of the state of the UK platform regulation debate (with more than a glance at the EU) complements Flew and Su’s account, whose international approach has enlarged the scope of our own analysis.

We have demonstrated how the British regulatory field has been reconstituted over the past several years and that its focus on platforms has become increasingly visible and prominent (Kretschmer, Furgal, Schlesinger, 2021). Moreover, in the past year or so a ‘neo-regulatory’ regime has emerged from the shadows. Presently, a new assemblage of British regulatory bodies is seeking to find sufficient coherence to face the tough task of matching major platforms’ economic, political and communicative fire-power (Schlesinger, 2021). Is this a portent of parallel developments elsewhere?

Of the three main categories used to organise Terry Flew and Chunmeizi Su’s analysis, it is the recommendations that address ‘competition’ and ‘content’ that have been the most prominently discussed in policy initiatives, whereas those regarding ‘rights’ have been the least addressed. Perhaps that finding should give particular cause for concern, in light of the growing legitimacy crisis of major democracies.

One matter still to be resolved, as Mapping International Enquiries makes clear, is the longer-term working out of regulatory relations between states and the so-called ‘gatekeeper’ platforms. That disputed space, not least in the UK, is being filled with codes of practice and of conduct, which are as a much a locus of negotiation as one of clear prescription. At CREATe, we have begun to work on the new rules-making, which is our next port of call. In this regard, Flew and Su have cited what might now be known as Sue Halpern’s Potemkin Question regarding platforms’ self-regulation. Will there just be glitz, she has asked, to distract the official eye from what goes on beneath the veneer? In effect, this is another way of asking whether regulatory capture can be avoided by various forms of  complicity. The only way to find out is to gain access and investigate how things work. And if the road is barred to curious outsiders, reliable evidential proxies will need to be found for the assessment of all types of regulatory performance. No shortage of things to do, then, for the quis custodiet brigade.

In the end, the construction of each domestic neo-regulatory regime depends profoundly on the constitutive role of dominant political and legal cultures within each bounded polity. But, unavoidably, the complexity of the emergent order will also be substantially shaped by the present reworking of international regulatory relations. Writing from within the UK, where – following Brexit – de rigueur regulatory distancing from the EU is gradually gathering increased focus and pace, we can hardly be uninterested in how that game will play out.

There has been a resurgence of interest across multiple jurisdictions in greater regulation by nation-states of aspects of the structure, conduct and performance of digital platforms. This has been driven by: growing concerns about the economic and other forms of power exercised by the largest platform companies in the digital economy; a series of ‘public shocks’ related to the misuse of such power and digital reach; pervasive community concerns about privacy, security, the misuse of personal data, and the erosion of rights in a digital age; and a policy shift from a ‘rights’ discourse that dominated early debates about internet governance towards one focused upon potential risks and online harms.

While there are similar factors across nations promoting questions about why greater regulation of digital platforms should occur, there is less consensus about how it should be undertaken. This report seeks to map the issues raised and policies recommended, identifying the issues as arising across the fields of competition policy, content policy and digital rights. Undertaking an initial environmental scan of 65 public enquiries, the authors undertook a textual and thematic analysis of a subset of 20 public inquiries, across seven countries, the European Union, and the United Nations. The approach taken parallels that of Kretschmer, Furgal and Schlesinger in their mapping of the emergence of a new regulatory field of platform governance in the United Kingdom (Kretschmer et al., 2021).

In terms of policy recommendations, it was found that with regards to competition, access to data, competition in digital markets, the future of the news industry, and platform regulation were common themes across the enquiries. The main drive for content regulation has been perceived online harms, and the main themes identified include the role of digital platforms, in disseminating or restricting access to harmful content, support for civil society organisations monitoring misinformation and online harms, development of multi-stakeholder codes of practice, and an expanded role of public authorities. In the more diffuse field of rights, the main drivers of policy reform are online targeting of consumers, transparency on political advertising, data portability, privacy laws, and regulations on third-party uses of data along the lines of the European Union’s GDPR. There is also an emerging literature on regulatory issues raised by artificial intelligence.

The report concludes with a discussion of issues raised by national policy regulations, including jurisdictional authority over global platforms headquartered in other countries, the question of who regulates, and the appropriate balance between nation-state regulation, industry self-regulation, and multi-stakeholder governance. It finds some support for the proposition that such issues are seeing the rise of hybrid regulatory entities that operate across industry and policy silos, as part of what Philip Schlesinger has termed neo-regulation (Schlesinger, 2021).